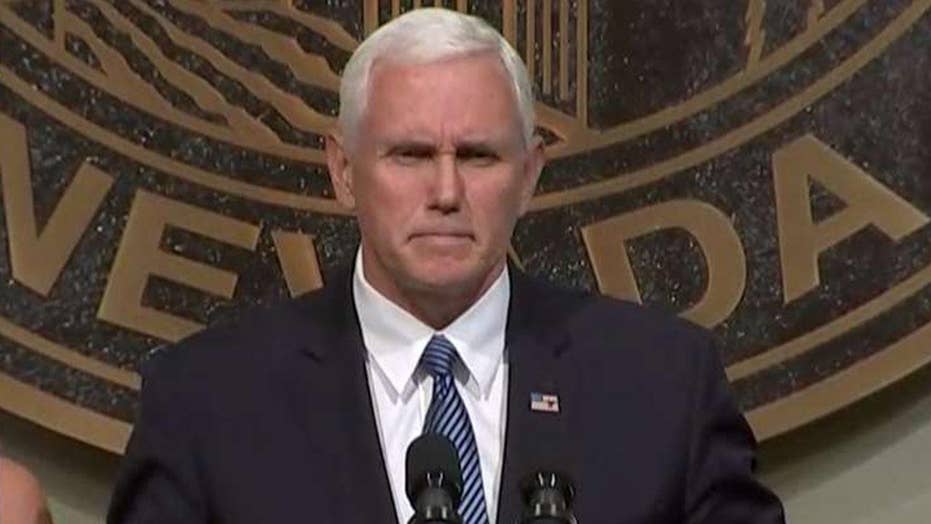 Mike Pence: Today, we are all Vegas strong

Vice President Mike Pence on Saturday traveled to Las Vegas to pay respects to the victims and honor the heroes of the country’s most deadly mass shooting, calling the actions of shooter Stephen Paddock “pure evil.”

“On Sunday night, Las Vegas came face to face with pure evil,” Pence said during brief remarks at the Las Vegas City Wide Unity Prayer Walk. “But no evil, no act of violence will ever diminish the strength and goodness of the American people.”

He added, “It was a tragedy of unimaginable proportions.”

Fifty-eight people were killed and about 500 were injured in Sunday’s attack when Paddock opened fire from the 32nd floor of the Mandalay Bay casino at attendees of a country music concert.

“The Bible tells us that the Lord is close to the broken-hearted and this will be our prayer for all of you,” Pence, accompanied by his wife, said. “We do mourn with those who mourn and grieve with those who grieve. But we do not grieve like those who have no hope. Because heroes give us hope.”

He said the heroes in the attack “inspired the nation.”

After his speech, Pence visited a memorial of crosses in Las Vegas for the victims. His motorcade also drove to the Mandalay Bay casino, so Pence could stop for several minutes to view the site of the Route 91 Harvest Festival, where the shooting took place.

On Saturday, nearly a week after the shooting, federal agents started hauling away the piles of backpacks, purses, baby strollers and lawn chairs left behind when frantic concert-goers scrambled to escape the raining bullets.

FBI agents fanned out across the crime scene near the Las Vegas Strip throughout the week stacking the belongings left from last Sunday's shooting into more than a dozen large piles. On Saturday morning, the agents were seen loading the items onto dollies and into the back of a white truck. Authorities have said they plan to return the belongings to people in the next week.

Investigators remained stumped about what drove Paddock, a reclusive 64-year-old high-stakes gambler, to begin shooting at the crowd before taking his own life.

Clark County Undersheriff Kevin McMahill said investigators had "looked at literally everything" and still do not have a clear motive.