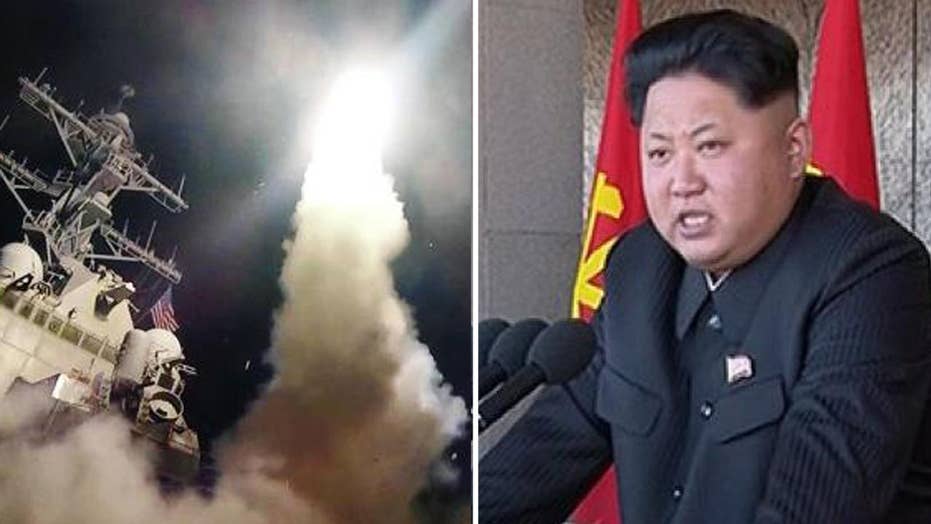 The U.S. missile attack against a Syrian airbase late Thursday added a new dynamic to talks held Friday between President Trump and Chinese President Xi Jinping. In launching the strikes, Trump might have sent a message to the rogue North Korean regime and its lone ally in Beijing.

"I don’t believe the president sat there and said ‘I am going to do this to send a message to North Korea,’" Sen. Marco Rubio, R-Fla., said Friday on "Fox & Friends." However, he said, "I do believe it sent a message to North Korea. If you are Kim Jong Un and you are watching tonight you are realizing we have a different thing going on here.”

“I think he is worried,” the former presidential candidate added.

On Friday morning, Trump did not specifically address the impact of the strikes on discussions between him and Xi, but told reporters the two leaders could make “potentially bad problems” go away.

“The relationship developed by President Xi and myself I think is outstanding. We look forward to being together many times in the future. And I believe lots of very potentially bad problems will be going away,” Trump said.

During his Thursday night briefing, Secretary of State Rex Tillerson said the strikes were a “kinetic military response” to Syria’s “use of prohibited chemical weapons” and did not represent a “change in our policy or our posture relative to our military activities in Syria today.”

“Israel fully supports President Trump’s decision and hopes that this message of resolve in the face of the Assad regime's horrific actions will resonate not only in Damascus, but in Tehran, Pyongyang and elsewhere,” he said.

In light of the Syria strike, some analysts believe China may take  the U.S. more seriously.

While he argued China “may be more willing to take actions, either by itself or with others, to slow the pace or even halt Pyongyang’s nuclear and missile programs,” Fravel noted that North Korea is a “much greater challenge militarily that cannot be solved with symbolic strikes.”