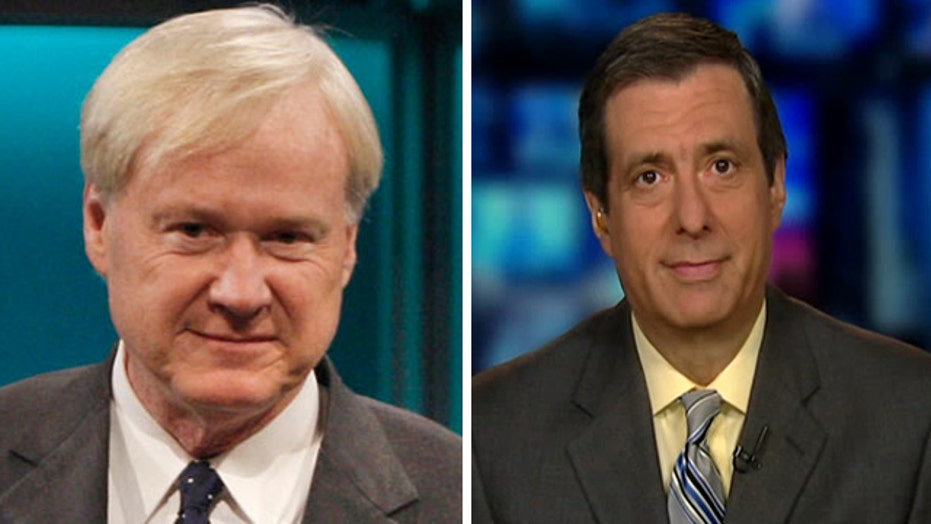 The sound is growing a bit louder.

As the Obama administration gears up for war against ISIS, some media voices--a minority, to be sure--are raising objections and invoking the specter of Iraq.

It would be overstating things to call this an antiwar movement, and it is drowned out by a steady drumbeat demanding to know why the president isn’t being more aggressive against the terrorists.

But the emergence of this media contingent carries unmistakable echoes of 2003, when most of the news business bought into the Bush administration’s drive to war. What followed, when it turned out that Saddam had no WMD, was a flurry of editor’s notes, mea culpas and a sense of collective guilt.

These days, of course, the press seems to be prodding a reluctant president into war. The coverage of ISIS and the endless re-running of images from the beheading videos caused a surge in public support for airstrikes in Iraq and Syria. But not everyone in the fourth estate is saluting.

Chris Matthews may be the most visible of the naysayers. He used his MSNBC show to deride “this wild, angry push for war, another one in the land of Islam.”

There was more: “Here we go again, going in with all the field marshals of the op-ed pages urging us on. All the tongues, wagging, demanding, that the United States get itself right back in the middle of the latest outrage from Mesopotamia…

“And yes, the bombs will work. People will die. There will be pictures in the world press of mothers holding babies and the wounded in their hospital beds, and there will be an outcry against us.”

Whether Matthews is off-base or not, this is an important debate for the country. If there’s one thing our decade in Iraq taught us, beyond the fact that we were not greeted as liberators, it’s that war has unintended consequences.

The New York Times editorial page today is warning about a "slippery slope." After Gen. Martin Dempsey, the Joints Chiefs chairman, told Congress that under some future circumstances he might have to recommend the use of ground troops, the paper said:

"There is no way to read this other than as a reversal from the firm commitment Mr. Obama made not to immerse the country in another endless ground war in the Middle East.

"Even though General Dempsey's remarks were conditional, the Obama administration has turned on a dime in record time and opened the door to deeper, more costly American involvement even before the strategy is fully sketched out."

Even supporters of tough military action, against these terrorists who murder journalists, concede there are all kinds of complications, from the jumbled allegiances in Syria -- where U.S. policy is still to get rid of Assad -- to the lack of ground forces and coalition partners.

Obama’s latest actions have scrambled the usual partisan lines. Some conservatives who are no fans of the president, and think he waited too long, and want him to do more, are nevertheless supportive of military action. And some liberals whose natural inclination is to back Obama are plainly uncomfortable with these airstrikes.

The question that some media folks are struggling to answer is: How much of a threat is ISIS, anyway? Obviously it’s an evil and deadly force, and the administration has raised the estimate of its strength from 10,000 to 30,000. But does it have the resources to attack outside the territory it controls in Syria and Iraq?

“IS is already over-stretched, and the regional powers who are actually threatened by it, have been slowly mobilizing against it. All of that was happening before Obama decided to Americanize the conflict. Immediately, there is less incentive for the regional actors to do the work themselves, and IS now has a global legitimacy – the US president is now its chief enemy! – it can leverage for further recruits…

“Let me be clear. I have no illusions about Jihadism or the evil of ISIS. I passionately oppose everything they stand for in every single respect. I abhor their brutality, their twisted version of religion, their pathetic neuroses disguised as faith, their inability to cope with the modern world, and their foul theocracy. But everywhere this kind of extremism has flourished in the Middle East – think of al Qaeda’s failed attempt to turn Jordan – has collapsed because the vast majority of Muslims – like anyone anywhere – do not want to be governed by these murderous loons.”

“Here’s something we’re not going to do, and I wish Obama and especially John Kerry would stop saying it. We are not going to ‘destroy’ ISIS, to use the word Obama deployed in last week’s address (preceded by a marginally softening “ultimately”). The Islamic State will not be ‘crushed,’ as John Kerry huffily put it in a recent tweet.  This is not possible. We all know this. We’ve been trying to destroy Al Qaeda for 13 years now. We have not. We will not. And we will not destroy ISIS. We can’t destroy these outfits. They’re too nimble and slippery and amorphous, and everybody knows it.”

In a Washington Post opinion piece, Middle East expert Ramzy Mardini argues “that U.S. military intervention has tremendous propaganda value for the Islamic State, helping it to rally other jihadists to its cause, possibly even Salafists who have so far rejected its legitimacy. Moreover, to the extent that the group poses any threat to the United States, that threat is magnified by a visible U.S. military role…

“It has become the consensus view in Washington that the militants are poised to bulldoze through America’s Middle East allies, destabilize global oil supplies and attack the U.S. homeland…

“But Americans are misreading the recent Islamic State successes, which speak less to the group’s invincibility and inevitability than they do to external factors beyond its control. Despite its territorial gains and mastery of propaganda, the Islamic State’s fundamentals are weak, and it does not have a sustainable endgame. In short, we’re giving it too much credit.”

One overarching problem is that the public is conflicted, says the Washington Examiner’s Philip Klein:

“A Wall Street Journal poll found that an overwhelming 74 percent of Americans favored at least air strikes against the Islamic State. But before seizing on this as evidence that Americans are now on the side of the uber-hawks, it’s telling that just 34 percent supported sending combat troops.

“Another way of thinking about this is that Americans don’t like it when the bad guys are kicking the U.S. around on the world stage and the president doesn’t seem to have any sort of plan to do anything about it. But that doesn’t necessarily mean that, in actuality, they are willing to do whatever it takes to stop the bad guys.”

The first major MSM argument I saw that the power of ISIS was being exaggerated came in this New York Times piece:

“Some officials and terrorism experts believe that the actual danger posed by ISIS has been distorted in hours of television punditry and alarmist statements by politicians, and that there has been little substantive public debate about the unintended consequences of expanding American military action in the Middle East.”

Well, it’s no JV team, that’s for sure. Whether the ISIS threat has been “distorted” by television pundits, and whether Obama’s counterterrorism efforts are sufficient, remains to be seen. What’s clear is that, unlike a decade ago, antiwar voices aren’t being muffled by the media.