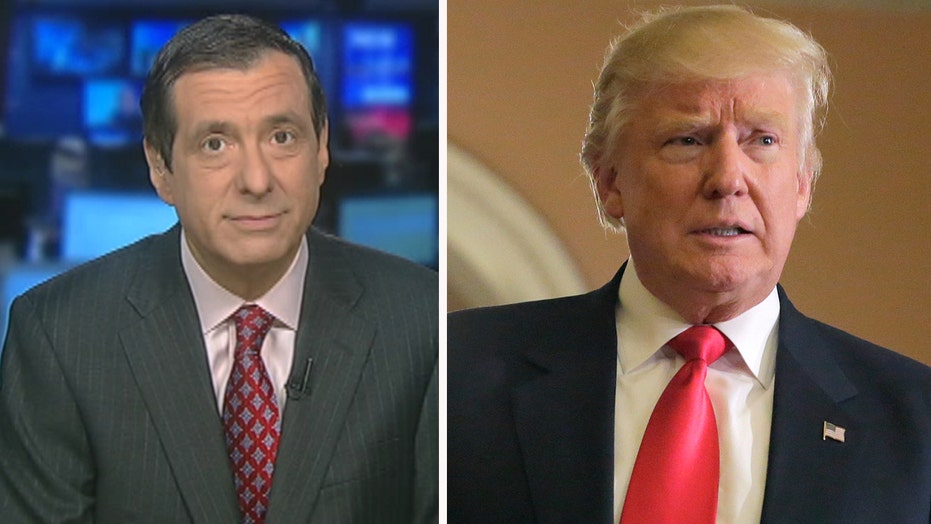 Kurtz: Time for the press to accept President Trump

I’ve been saying for a year and a half that the mainstream media have been underestimating Donald Trump, that too many journalists failed to grasp the deep disaffection and anxieties of millions of Americans drawn to his candidacy.

I said this, and wrote this, when Trump was up and when he was down. I argued it as leading journalists and media critics insisted Trump was such a dangerous force that they had to drop their usual standards and stop him. And I did this not because I’m a fan of any candidate but because I believe in journalism. Maybe I became a bit of a broken record, but I felt really deeply about this.

Now, after perhaps the biggest political upset in American history, many people in the business are saying the same thing.

It was a failure of historic proportions.

It was a failure rooted in hubris, insularity and just plain bias.

It was a failure spawned by a mindset that dismissed what part of the country wanted because it seemed unimaginable that Trump would not be found unfit.

And it was a failure that the media are doomed to repeat again and again if they don’t fundamentally change how they do business.

Those who try to shrug it off as the product of flawed polling or faulty predictions are missing the much larger point. On the mechanics, the Trump victory exposed the media’s perpetual overemphasis on fundraising, ads, ground game and data operations, all of which theoretically gave Hillary Clinton a huge advantage. But these things don't mean much if you don’t have a candidate with a winning message.

This isn’t about the blocking and tackling of politics, however. It’s about the heart and soul of media credibility.

I was literally stunned at the banner headline in yesterday’s New York Times: “DEMOCRATS, STUDENTS AND FOREIGN ALLIES FACE THE REALITY OF A TRUMP PRESIDENCY.”

Think about that. The man just won a smashing victory, and that headline basically says that people—the kind of people that Times editors view sympathetically—are shocked and appalled.

Can you imagine such a headline for an upset win by an unorthodox Democrat—say, Bernie Sanders? I can’t.

To his credit, Jim Rutenberg, the New York Times media columnist, addressed this question to his profession: “How did you get it so wrong?

“The question came in letters. (‘To editors and writers of The NYT,’ one reader wrote, ‘you were so wrong for so long. You misled your readers and were blinded by your own journalistic bigotry.’)”

And Rutenberg quoted Executive Editor Dean Baquet as saying: “If I have a mea culpa for journalists and journalism, it’s that we’ve got to do a much better job of being on the road, out in the country, talking to different kinds of people than the people we talk to — especially if you happen to be a New York-based news organization — and remind ourselves that New York is not the real world.”

Of course, Rutenberg also wrote in August that if a working journalist believes Trump “is a demagogue playing to the nation’s worst racist and nationalistic tendencies…if you view a Trump presidency as something that’s potentially dangerous, then your reporting is going to reflect that.”

But at least he’s asking the right questions now.

“To put it bluntly, the media missed the story. In the end, a huge number of American voters wanted something different. And although these voters shouted and screamed it, most journalists just weren’t listening. They didn’t get it.

“They didn’t get that the huge, enthusiastic crowds at Donald Trump’s rallies would really translate into that many votes. They couldn’t believe that the America they knew could embrace someone who mocked a disabled man, bragged about sexually assaulting women, and spouted misogyny, racism and anti-Semitism.

“It would be too horrible. So, therefore, according to some kind of magical thinking, it couldn’t happen.”

And Sullivan, a former editor of the Buffalo News, makes the cultural point that journalists are “college-educated, urban and, for the most part, liberal” and more likely to live in New York, D.C. and the West Coast. “And although we touched down in the big red states for a few days, or interviewed some coal miners or unemployed autoworkers in the Rust Belt, we didn’t take them seriously. Or not seriously enough.”

Or we somehow decided that we knew what was best for them.

These problems are so deep-rooted that they are going to be difficult to solve. But first there has to be a will to solve them, not just a few days of ritual hand-wringing before returning to business as usual.

President Obama was gracious toward the man he denounced during the campaign in their White House meeting yesterday. It’s time for the media to move past the election and attempt to cover the new president with a fairness that has previously eluded them.