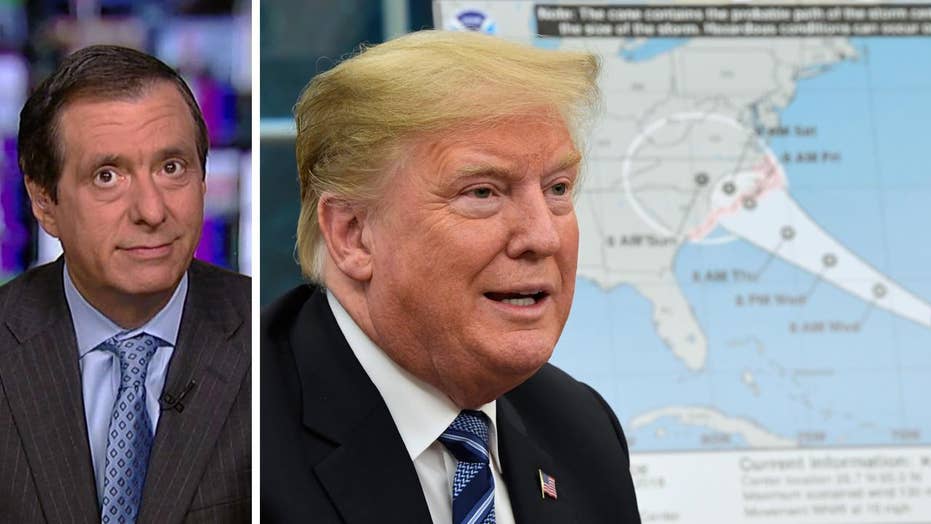 As the media blast out dire warnings about the destructive power of Hurricane Florence, they are also beginning a familiar ritual involving President Trump.

That is, the charge that he's not very good at handling these things.

The storm hasn't even made landfall, and once again we're hearing that Trump is lousy at emergency management and that he's tone deaf when it comes to providing aid and comfort.

As this Politico headline put it yesterday, "Trump Struggles to Embrace Consoler-in-Chief Role."

Now this was a major narrative last year. While FEMA was credited with doing an excellent job after monster hurricanes in Texas and Florida, there was constant carping that Trump didn't show the proper degree of empathy, that he didn't wade into crowds and hug people. That, of course, is not his style—he's not a feel-your-pain guy like Bill Clinton or Barack Obama—and doesn't fit the traditional conception of how a politician should behave. (And, of course, there was the media tantrum about Melania taking off in stilettos to flood-ravaged Houston.)

But then came Puerto Rico, which was absolutely devastated by a hurricane that so thoroughly destroyed the power grid that electricity wasn't fully restored until recently. Trump was lambasted for tossing paper towels into a crowd there. And while it's a fair criticism that the administration didn't focus as much attention on the Puerto Rican disaster, neither did the media—until they turned it into a Trump-is-screwing-up.

CNN's Jeff Toobin even turned it into a racism argument: "They're not white people, and they don't count to Donald Trump as much as the deaths of white people." So why did the deaths of Puerto Ricans—who are of course Americans—get a small fraction of the coverage as those in Florida and Texas? And by the way, any administration would have struggled with the wreckage on the poverty-stricken territory.

What triggered the latest round of criticism was a FEMA briefing on Florence at which Trump boasted about that situation. "I think Puerto Rico was an incredible unsung success," said the president, who also tweeted that his administration did an "unappreciated great job" on the island.

Well, it didn't take long for journalists to point out that nearly 3,000 people died from that storm, a tragic figure that was only recently officially confirmed after the ludicrous early estimate of less than 100. And the president kind of stepped in it by not pointing that out.

That, in turn, revived a feud from last year, with San Juan Mayor Carmen Yulin Cruz ripping Trump for "despicable" comments and "lack of understanding of reality."

The president stepped in it more deeply this morning, tweeting: "3000 people did not die in the two hurricanes that hit Puerto Rico. When I left the Island, AFTER the storm had hit, they had anywhere from 6 to 18 deaths. As time went by it did not go up by much. Then, a long time later, they started to report really large numbers, like 3000." This, he said, was done by Democrats "to make me look as bad as possible"--although there is zero evidence to support the idea that this is anything other than a good-faith evidence of how many people died.

And The Washington Post highlighted a Democratic senator's charge that the Trump administration transferred $10 million from FEMA to the immigration agency's detention program—a sensitive matter with Florence about the strike the Carolinas.

That is fair game for debate, but the Politico piece raised the broader question of the president's demeanor by citing his Sept. 11 visit to Shanksville, Pa., where a plane hijacked by terrorists was forced down 17 years ago.

The story noted that "a news photographer snapped a photograph of him giving supporters a celebratory-looking double-fist-pump on the tarmac as he exited Air Force One — an image that quickly went viral."

And: "The contrasting messages continued a pattern for this president, whose attempts to offer unifying messages to a polarized nation have often been laced with elements of discord."

Trump actually delivered a beautifully written speech at Shanksville. But those two seconds came to define the day because it fit the narrative.

Look, this is a career businessman, and he doesn't have the hand-holding instincts of polished politicians. And if the White House does a lousy job with Florence, journalists should aggressively report that.

It's just telling that the media are awash with these stories before the storm even makes landfall.