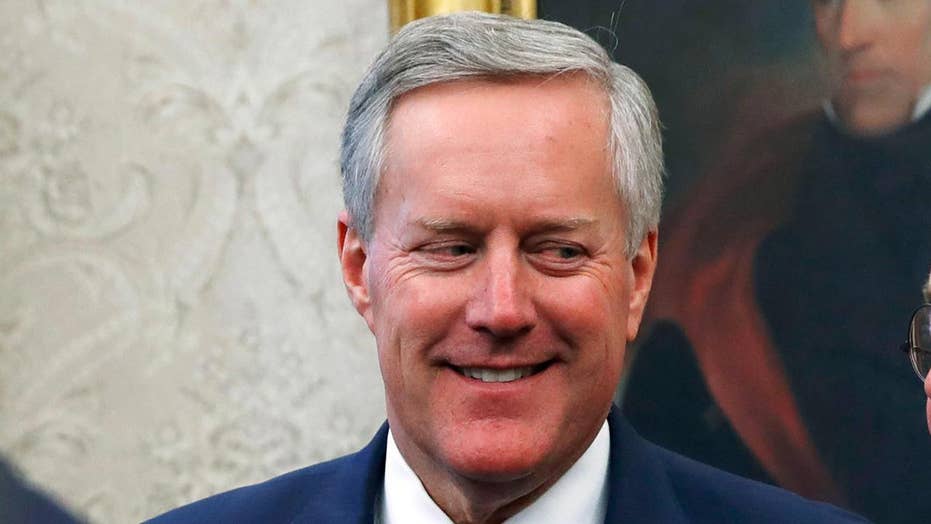 WH: We need Meadows in Congress to continue the great work

White House responds to the rumors Rep. Mark Meadows is being eyed for chief of staff.

Rep. Mark Meadows, R-N.C., is no longer a contender to replace the departing John Kelly as White House chief of staff, the Trump administration announced Wednesday.

"Congressman Mark Meadows is a great friend to President Trump and is doing an incredible job in Congress," White House Press Secretary Sarah Sanders said in a brief statement. "The President told him we need him in Congress so he can continue the great work he is doing there."

"I've had the best job in the world, representing my constituents of western North Carolina and working alongside President Trump these last two years to give the forgotten men and women of America a voice in their government," Meadows said in a statement of his own. "I'm fully committed to continuing to both of those roles. I know the President has a long list of tremendous candidates for his next Chief of Staff, and whomever it is will have my total support moving forward."

Meadows' removal from consideration was first reported by The Wall Street Journal.

Meadows, the chairman of the conservative House Freedom Caucus, told Fox News Monday that he had not discussed the role with Trump.

"It's not been anything that I've been out advocating for," said Meadows, who added that "my life changed" after Trump's to pick to replace Kelly -- Nick Ayers, Vice President Mike Pence's chief of staff -- decided to pull out of the job. While a White House official said Ayers' decision was driven by a desire to return to Georgia to be closer to his family, the Associated Press reported that Ayers was also worried about scrutiny of his former political consulting business. He and Trump also could not agree on Ayers' length of service. Ayers wanted to serve on an interim basis; Trump wanted a two-year commitment.

The current list of candidates is said to include Office of Management and Budget Director Mick Mulvaney and former New Jersey Gov. Chris Christie. White House counselor Kellyanne Conway told reporters Tuesday that Kelly would be staying on "at least" through Jan. 2.

Whoever replaces Kelly will be the third chief of staff for Trump, who has already burned through a former chairman of the Republican National Committee and a retired Marine four-star general.