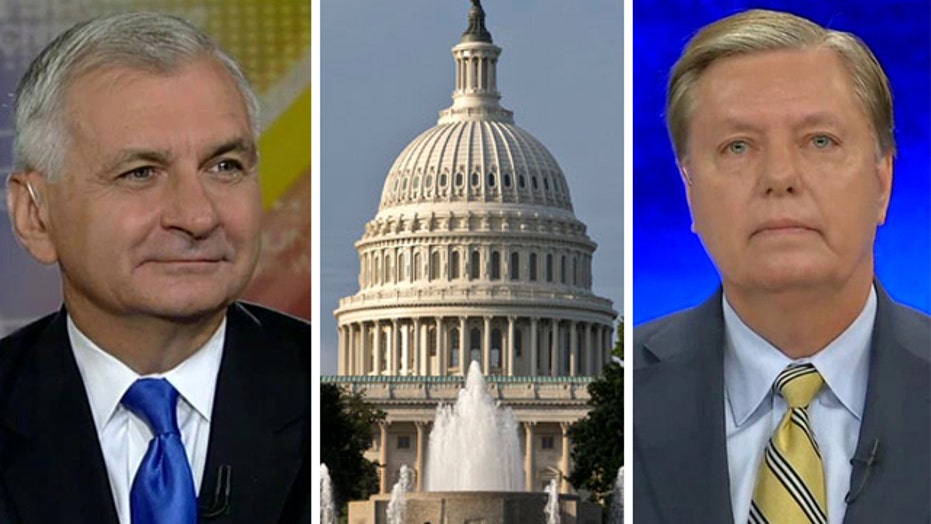 Will campaign against ISIS unite a divided Congress?

White House Chief of Staff Denis McDonough on Sunday dismissed accusations that the Obama administration is waffling over whether the United States is indeed at war with Islamic State, saying the administration has been “very clear” about the military mission against the terror group.

“We’ve made it very clear from the start,” McDonough told “Fox News Sunday." “Just as we have been at war with Al Qaeda, in similar fashion we are at war with ISIL.”

McDonough's comments follow President Obama's remarks to Americans on Wednesday night, when he said that the U.S. will increase airstrikes on Islamic State positions in Iraq and that he has OK’d similar strikes in Syria, which has been followed by a seemingly mixed and evolving message from a series of top U.S. officials.

On Thursday, Secretary of State John Kerry described the U.S. military effort as “very significant” and a “major counter-terrorism operation,” but said, “war is the wrong terminology.”

The next day, the White House and Pentagon acknowledged that the U.S. “is at war” with the Islamic State, the terrorist group formerly known as ISIS.

Pentagon spokesman Rear Adm. John Kirby used almost identical language when pressed by reporters about whether the expanded military operation against the terrorist group is, in fact, a war.

Sen. Lindsey Graham, R-S.C., a member of the Senate Armed Services Committee, told "Fox News Sunday": “You cannot create an army to destroy ISIL without an American component. … This is war.”

He and others have suggested that U.S. Special Forces, not battalions of ground troops, are needed.

Polls show Americans support airstrikes, but not a war like the ones in Afghanistan and Iraq.

McDonough also repeated Sunday that Obama’s plan does not include U.S. soldiers in a combat mission, but declined to say how many military people will ultimately be needed, amid speculation the number needs to be about 5,000.

McDonough said the U.S. now has about 1,400 military personnel in Iraq -- protecting Americans, Baghdad, the Baghdad airport and the city or Erbil.