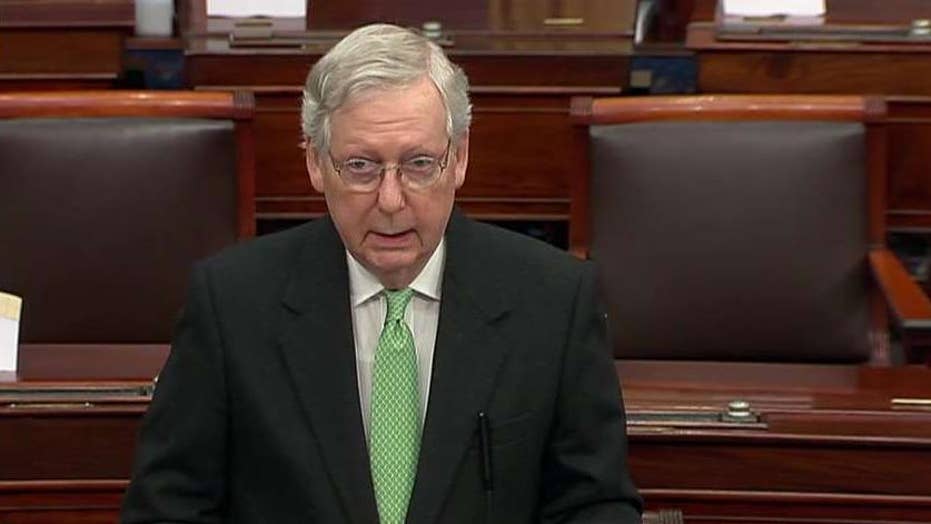 Senate Majority Leader Mitch McConnell struck back Tuesday at his Democratic counterpart's calls for an in-depth impeachment trial featuring multiple new witnesses, dismissing the push as a "fishing expedition" that would set a "nightmarish precedent."

"The Senate is meant to act as judge and jury, to hear a trial, not to re-run the entire fact-finding investigation because angry partisans rushed sloppily through it,” he said on the Senate floor.

In a Sunday letter, Senate Democratic Leader Chuck Schumer had called for the chamber to subpoena new documents and call witnesses who had been blocked by the White House during the impeachment inquiry on the House side.

McConnell, R-Ky., claimed that such investigative steps, though, were part of the House role -- not a mission for the Senate. He warned that entertaining Schumer’s proposal to do House lawmakers’ “homework” could invite a string of future “dubious” and “frivolous” impeachment inquiries. 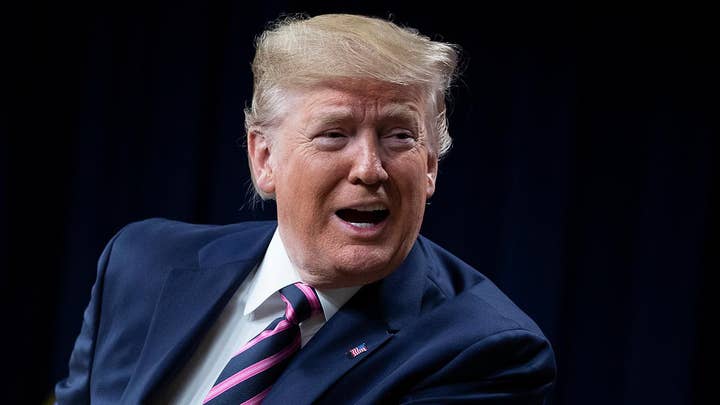 He stressed the fact-finding mission should have been completed during the impeachment inquiry led by House Intelligence Committee Chairman Rep. Adam Schiff, D-Calif. McConnell accused the House of doing a rush job, and said Schumer is now looking "to make Chairman Schiff's sloppy work more persuasive."

The comments come as the full House prepares to vote as early as Wednesday on impeachment articles, alleging abuse of power and obstruction of Congress over President Trump's bid to pressure Ukraine to investigate Democrats. McConnell and Schumer are poised to meet in the near future to discuss the framework for an expected Senate trial, but have traded barbs in the run-up to their sit-down.

The majority leader on Tuesday also pointed out that Schumer's letter referenced “keeping with the bipartisan spirit” of the procedures followed in the 1999 impeachment trial of then-President Bill Clinton, but stated that Schumer then went on “to demand things that would break with the 1999 model.” For example, he recalled that the 1999 impeachment trial procedures were laid out in two separate resolutions, with many of the details coming after it began and following a motion to dismiss that had been filed by Democrats including Schumer himself. Schumer’s letter, however, called for all procedures to be set out in a single resolution.

"Look, most people understand what the democratic leader is really after," McConnell said, alleging that what Schumer wanted to do was "lock in live witnesses."

Schumer's letter called for subpoenas for witnesses who had not appeared before the House, including former National Security Adviser John Bolton and acting White House Chief of Staff Mick Mulvaney. The House had requested that the witnesses testify before them, but when they refused, the House declined to take further action. McConnell claimed this was because they were not interested in due process.

Schumer took to the Senate floor minutes later with a pointed response.

"I listened to the leader's speech. I did not hear a single sentence, a single argument for why the witnesses I suggested should not give testimony," Schumer said. He claimed that if there were witnesses who had valuable information, the Senate should hear them.

Schumer also accused McConnell of not working with him to iron out procedures.

"My letter was intended as a good-faith proposal to kickstart the discussions that Leader McConnell has so far delayed in scheduling," he said.