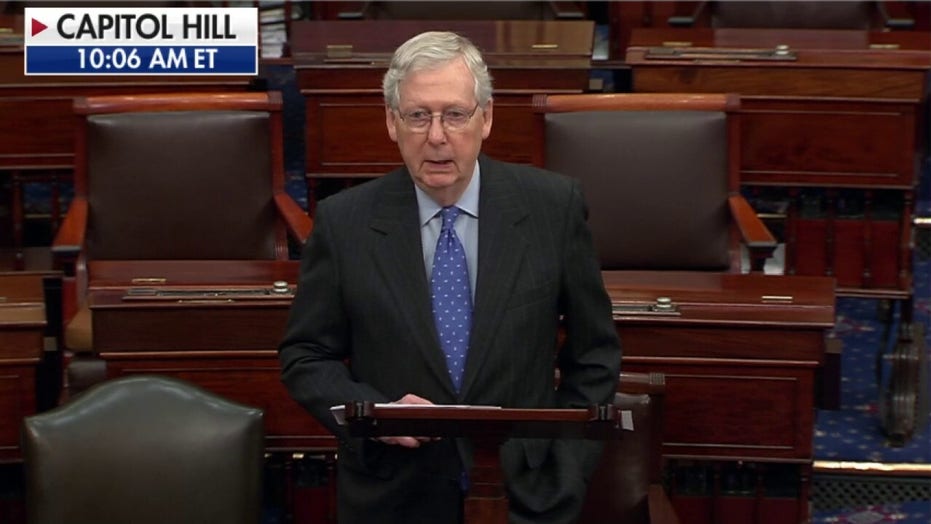 Mitch McConnell: America had to watch Senate 'spin its wheels' during 'national crisis'

Senate Majority Leader Mitch McConnell warned Tuesday that the “clock has run out” for “bargaining” on the third phase of a coronavirus response package, urging Congress to pass legislation “today.”

From the Senate floor just a day after Democrats blocked the latest COVID-19-related legislation from moving forward, McConnell, R-Ky., gave a dire warning to members.

“This is a national crisis. It’s the most serious threat to Americans’ health in over a century and quite likely the greatest risk to American jobs and prosperity that we’ve seen since the Great Depression,” McConnell said. “The urgency and gravity in this moment cannot be lost on anyone.”

McConnell went on to say that “every day, every hour Congress delays passing significant relief efforts, we risk livelihoods.”

“The clock has run out. The buzzer is sounding. The hour for bargaining as though this were business as usual has expired.”

McConnell’s comments come after Democrats, for the second time, on Monday blocked the legislation from moving forward, claiming the plan did too much for large corporations and not enough for workers. Republicans accused them of playing politics and using the crisis as leverage to try and jam through unrelated political “wish list” items concerning climate change and more.

But Senate Minority Leader Chuck Schumer, D-N.Y., and Treasury Secretary Steven Mnuchin have indicated that negotiations are yielding progress, and the chamber could be close to a deal and a new vote.

The Senate’s draft legislation would have provided payments of up to $1,200 per person.

Central to the package was as much as $350 billion for small businesses to keep making payroll while workers are forced to stay home. Democrats, though, want constraints on the largely Republican-led effort to provide $500 billion for corporations, which Democrats have called a "slush fund.”

“Everyone needs help,” McConnell said Tuesday. “We’re all in this together. We need an all-of-the-above approach. Help for workers and families and employers and health care providers.”

Even if the Senate can advance legislation, however, what happens on the House side remains to be seen.

House Democrats, led by Speaker Nancy Pelosi, D-Calif., offered their own version of a coronavirus stimulus bill on Monday. But buried inside the proposal are a host of items that Republicans charge are unrelated to the COVID-19 outbreak.

The bill, proposed by Pelosi, D-Calif., seeks to eliminate debt held by the U.S. postal service, require same-day voter registration, pay off $10,000 in student debt per person, mandate that airlines taking aid reduce their overall carbon emissions by 50 percent by 2050, and force federal agencies to explain to Congress how they are increasing their usage of “minority banks.”

The legislation also would provide for the automatic extension of nonimmigrant visas and restrict colleges from providing information about citizenship status. The bill also would allocate $35 million to the John F. Kennedy Center for the Performing Arts.