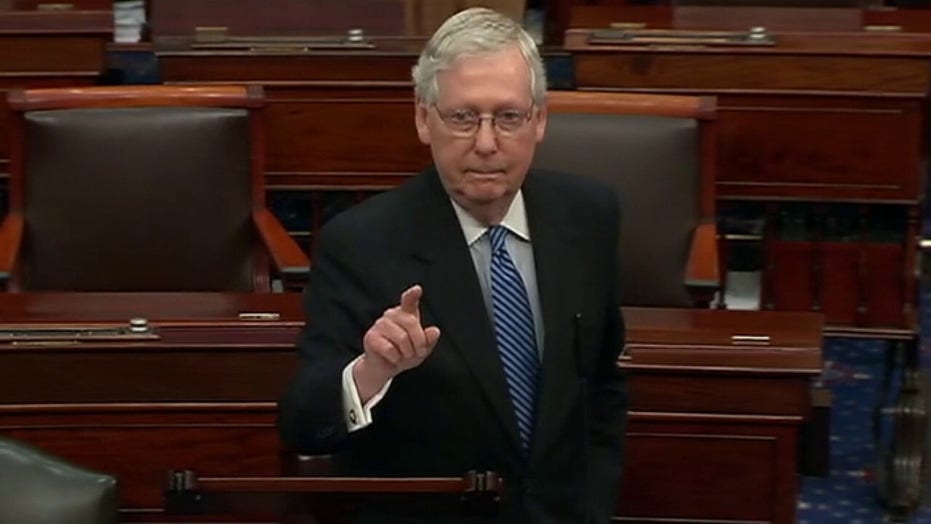 Tensions flared on the Senate floor Monday as lawmakers viscerally clashed on camera over phase three of a coronavirus response package, with Democrats blocking Republican efforts to advance the massive stimulus bill for the second day in a row.

Leaving the legislation in limbo once more, the Senate stalled over the package Monday afternoon on a 49-46 vote. It needed 60 votes to advance.

Senate Majority Leader Mitch McConnell, R-Ky., then stormed to the floor to accuse Democrats of "mindless obstruction" that could drag out any action for days. He said Democrats' list of demands keeps getting "longer and longer."

Democrats argue the more-than $1 trillion package did too much for large corporations and not enough for workers, but Republicans accuse them of playing politics and using the crisis as leverage to try and jam through unrelated political "wish list" items concerning climate change and more.

“Here we are dilly-dallying around,” Thune said. “This bill is about workers, families, people out there hurting economically—we’re in a position to do something about it and it is high time that we did.” 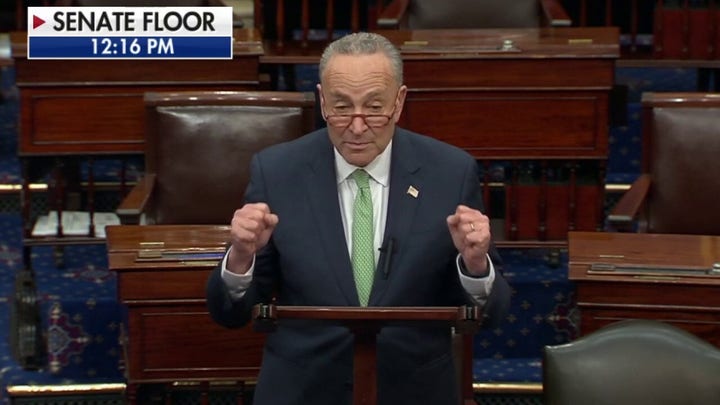 Emotions ran so high on the floor before the vote that at one point Senate Minority Whip Dick Durbin, D-Ill., implored colleagues to take a breath and focus on the work.

The package first failed Sunday in the face of Democratic opposition. McConnell then called Monday for the re-do on the procedural vote to begin debate—to which Senate Minority Leader Chuck Schumer, D-N.Y., agreed. That vote failed, again, shortly afterward.

“Republicans understand that a national crisis calls for urgency and calls for bipartisanship,” McConnell said earlier. “It’s time for Democrats to stop playing politics and step up to the plate.

“This has got to stop and today’s the day it has to stop,” McConnell said. “The country is out of time.”

Schumer countered that Democrats are only “looking for oversight. If this federal government is making a big loan to someone, to a big company, we ought to know it and know the details immediately. The bill that was put on the floor by the Republican leader said no one would know a thing about those loans for six months, at least.”

Meanwhile, House Speaker Nancy Pelosi on Monday, after returning to Washington, D.C., from recess, said House Democrats would roll out their own bill, again accusing Senate Republicans of putting corporations first in their proposed legislation.

“The Senate Republicans’ bill, as presented, put corporations first, not workers and families,” Pelosi said in a statement Monday. “Today, House Democrats will unveil a bill that takes responsibility for the health, wages and well-being of America’s workers: the Take Responsibility for Workers and Families Act.”

Senate Republicans, like McConnell and Thune, slammed Pelosi on Monday, claiming that she returned from recess and sabotaged all bipartisan efforts in the upper chamber.

“There was great bipartisan cooperation and then yesterday, the Speaker of the House showed up with an agenda,” Thune said. “And all of a sudden, it got taken over at the leadership level…and instead of helping American workers, we’re talking about the Green New Deal.”

But Durbin defended Pelosi, saying that it is clear that “she really does unnerve people on the other side.”

Durbin added that her intervention in negotiations “happens to be consistent with the bicameral system of government that we have.”

And Sen. Chris Murphy, D-Conn., said the original bill was not bipartisan, and that Democrats were not included in initial negotiations.

Meanwhile, Schumer, who said he was “hopeful” the Senate would get something done Monday, left the Senate floor to continue negotiations with the White House and Senate Republicans.

“We’re going to get this done today,” Treasury Secretary Steven Mnuchin said Monday. “Everybody is working very hard so we look forward to a big vote today.”

When asked when he expected to have a final agreement with both Senate Republicans and Democrats, Mnuchin said: “As fast as we can.”

But McConnell is likely to face a challenge in crossing the 60-vote hurdle of the procedural vote, as five key GOP senators are in self-quarantine.

On Sunday, Sen. Rand Paul, R-Ky., announced he had tested positive for COVID-19, sending Sens. Mike Lee, R-Utah, and Mitt Romney, R-Utah, into self-quarantine after interacting with Paul throughout the weekend.

Paul, Lee, and Romney joined Sens. Rick Scott, R-Fla., and Cory Gardner, R-Co., in self-quarantine. Scott, out of an abundance of caution, put himself in quarantine after meeting with Brazilian President Jair Bolsonaro. A member of Bolsonaro’s staff tested positive for the virus. Gardner went into self-quarantine on March 17 after interacting with a constituent who, also, later tested positive.