Senate Majority Leader Mitch McConnell set the stage Thursday for a potentially bruising fight between the leadership of the two chambers over impeachment, as he tore into Nancy Pelosi for “shoddy work” and said Democrats may be “too afraid” to send the articles to the Senate after the House speaker abruptly held off on transmitting them.

“This particular House of Representatives has let its partisan rage at this particular president create a toxic new precedent that will echo well into the future,” McConnell said on the floor, accusing Democrats of giving in to "temptation" with their impeachment vote while challenging their handling of the articles in the aftermath.

"Looks like the prosecutors are getting cold feet," the Senate GOP leader mused.

McConnell’s remarks came the morning after House Democrats voted to impeach President Trump for abuse of power and obstruction of Congress in relation to his July 25 phone call with Ukrainian President Volodymyr Zelensky.

McConnell decried the effort, for which no Republicans voted, as “the most rushed, least thorough, and most unfair impeachment inquiry in modern history.” It taps into long-standing complaints by Republicans that the impeachment has trampled over minority rights in the House, and that Democrats were pursuing an outcome they have preordained before Trump was even sworn into office.

After McConnell spoke, Senate Minority Leader Chuck Schumer shot back by dismissing the Republican claim that the impeachment was purely partisan as only Democrats voted for it.

"Forgive me, House Democrats cannot be held responsible for the cravenness of the House Republican Caucus and their blind fealty to the president," he said.

After an impeachment in the House, the articles are normally sent over to the upper chamber for an impeachment trial. Yet in the latest twist, Pelosi has indicated that she may not send over articles of impeachment yet -- until she gets reassurances about the Senate process.

"We’ll make a decision... as we go along," Pelosi told reporters Wednesday, adding that "we'll see what the process will be on the Senate side."

"We have acted," Pelosi continued, repeatedly refusing to commit to sending the articles of impeachment to the Senate. "Now, they'll understand what their responsibilities are, and we'll see what that is.”

Pelosi insisted that Republicans would need to run a fair trial if the matter made its way to the Senate, without explaining what exactly she was seeking.

Pelosi sought to clarify in a press conference Thursday morning that her side is just waiting to see what the process will be in the Senate, so they can choose their “managers” for a trial who would essentially serve as prosecutors.

House Judiciary Committee Chairman Jerry Nadler, D-N.Y., insisted, in separate remarks, that Democrats are “not playing games” with impeachment and the articles will be transmitted.

Pelosi, though, made clear that she did not intend to name the managers until they understand the “arena” in the Senate. And she fired back at McConnell, suggesting he’s a “rogue leader.” 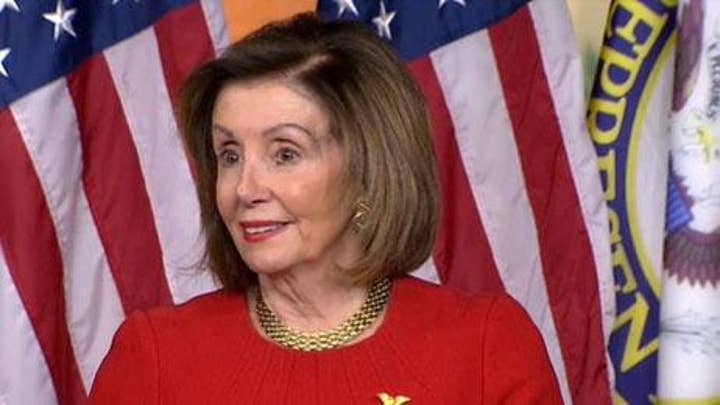 While the move could be a way of trying to draw some concessions from McConnell, it also stirred speculation that it could be a play to stop a potentially damaging Senate trial altogether, in which the Republican-dominated chamber could call witnesses such as former Vice President Joe Biden, his son Hunter, and House Intelligence Committee Chairman Adam Schiff, D-Calif.

Such a scenario, however unlikely, would also leave Trump with an awkward status quo in which he is impeached, but cannot claim exoneration in a Senate trial -- where he would be widely expected to win acquittal. However, it also risks dragging impeachment out deep into 2020, just as some polls indicate the public is souring on the process.

McConnell accused Pelosi of suggesting “that House Democrats may be too afraid ... to even transmit their shoddy work product to the Senate.”

Calling the development "comical," he said Democrats who stressed the urgency of the process now seem "content to sit on their hands."

Senate Judiciary Committee Chairman Lindsey Graham, R-S.C., was even more fiery, alleging on Twitter, "If House Dems refuse to send Articles of Impeachment to the Senate for trial it would be a breathtaking violation of the Constitution, an act of political cowardice, and fundamentally unfair to President @realdonaldTrump."

Yet, as Pelosi voices concern about a fair trial, McConnell made clear that he wants the Senate to acquit, as a statement against the impeachment articles he decries as constitutionally ungrounded.

"If the Senate blesses this historically low bar, we will invite the impeachment of every future president," he said Thursday.

McConnell is expected to meet with Schumer but any delay in the House could lead to McConnell refusing to meet with Schumer, giving the excuse that there are no articles for them yet to discuss since they have not been transmitted. Schumer, in his remarks, asked whether McConnell would choose not to call any witnesses for the Senate trial, alluding to speculation that Senate Republicans may move to dismiss the case against Trump immediately.

“Will Leader McConnell, breaking precedent, strongarm his caucus into making this the first Senate impeachment trial of a president in history that heard no -- no -- witnesses?” Schumer said.

Trump, meanwhile, attacked the “do nothing Democrats” for wanting to “do nothing” with the impeachment articles.

“I got Impeached last night without one Republican vote being cast with the Do Nothing Dems on their continuation of the greatest Witch Hunt in American history,” he tweeted. “Now the Do Nothing Party want to Do Nothing with the Articles & not deliver them to the Senate, but it’s Senate’s call!”

In his remarks, McConnell said that the Senate’s duty is to rise to the occasion on matters as grave as impeachment and to give the nation some stability.

“The framers built the Senate to provide stability … to keep partisan passions from literally boiling over,” he said. “The Senate exists for moments like this.”

Fox News’ Chad Pergram, Brooke Singman and Gregg Re contributed to this report.