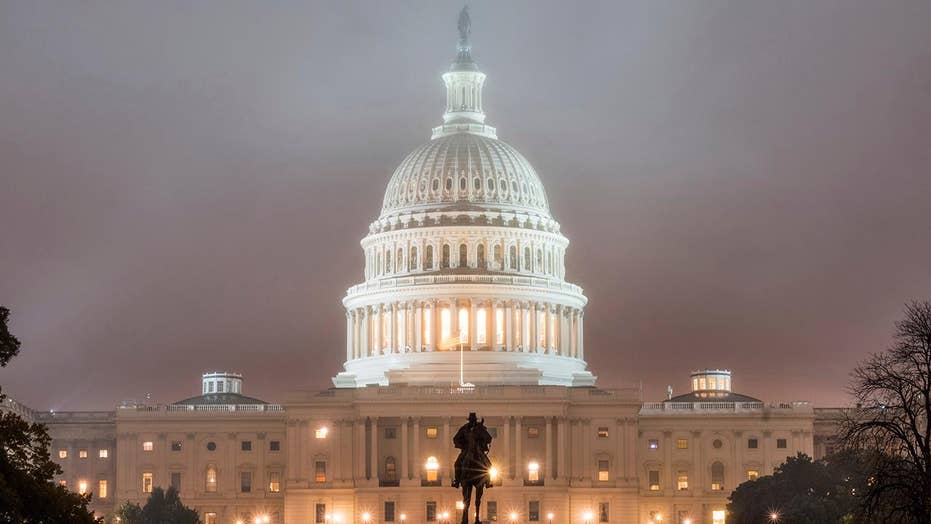 Doug McKelway reports from Capitol Hill on what the president, Democrat leaders are saying ahead of their meeting on border wall funding.

A casual congressional observer may suspect that Senate Majority Leader Mitch McConnell, R-Ky., gets a little sappy at Christmastime.

“I’m sort of hoping for a Christmas miracle,” McConnell declared on Tuesday, about the prospects for avoiding a government shutdown. “Magic things happen at Christmas. And that’s what I’m counting on.”

Hear those words, and you might rank McConnell right up there with Irving Berlin.

Christmas in Washington. A Capitol Christmas. Christmas on Capitol Hill.

But before anyone thinks this is like a picture print by Currier and Ives, hardened congressional veterans know McConnell is painting a bleak picture of the Yuletide season.

“Members should now be prepared to work between Christmas and New Year’s if necessary in order to complete our work,” McConnell warned, speaking about a rejuvenated effort to pass a criminal justice reform bill before the end of the year.

And you thought only the Grinch had a heart that was two sizes too small.

Then there was the zany tableau in the Oval Office Tuesday, which fueled concerns about whether Congress can strike a budget deal. President Trump, House Minority Leader Nancy Pelosi, D-Calif., and Senate Minority Leader Chuck Schumer, D-N.Y., huddled at the White House about a partial government shutdown just before Christmas.

“I am proud to shut down the government for border security,” Trump boasted. “I will be the one to shut it down.”

Romance at Reindeer Lodge, this wasn’t.

The president alternatingly sparred with Pelosi and Schumer. But the exchanges between Trump and the Senate’s top Democrat were like two guys from Queens and Brooklyn, bickering about the Mets and Yankees in a pub on Atlantic Avenue.

“One thing I think we can agree on is we shouldn’t shut down the government over a dispute. And you want to shut it down,” said Schumer.

“Twenty times. Twenty times, you called for. I will shut down the government if I don’t get my wall,” argued Schumer.

“You want to know something?” said Trump.

“You said it,” exclaimed Schumer.

Even Heat Miser and Snow Miser don’t quarrel like this.

Jaws hung agape on Capitol Hill. Many lawmakers and aides were suddenly resigned to spending the holidays in Washington.

One member of Congress talked about flying their kids out to Washington for Christmas. Another made arrangements for someone to care for an elderly relative back home.

Still, the White House scene may have been inevitable. Everyone has to play to their base. Publicly.

Trump promised supporters a border wall. He insists Democrats are “weak on border security.” So tangling with Pelosi and Schumer checks that box. The idea of a government shutdown over the wall doesn’t play well inside the Beltway. But the wall was a touchstone of the president’s 2016 campaign. A skirmish with Pelosi and Schumer resonates with Trump’s loyalists.

Pelosi is still a few votes shy of what’s necessary to become House speaker in January. She needs to spar with Trump to remind liberals why she’s the most-qualified to return to the speaker’s suite. Another box checked.

Republicans -- and many Democrats -- blamed Schumer for the brief shutdown in January. Schumer needs to contrast his approach to that of Trump and sidestep what the GOP previously billed as the “Schumer Shutdown.” Check.

So now the work begins behind the scenes to avoid a shutdown on Dec. 22.

“The Oval Office with cameras is not the setting for having candid conversations,” observed Rep. Vicente Gonzalez, D-Texas. “It’s hard to negotiate with cameras in front of you. It draws people into their own corners. It keeps the world divided.”

“I don’t think it ever helps to have discussions like this in public,” said Sen. Jeff Flake, R-Ariz.

Politics is always a little bit theater. A little bit substance. We’ll soon know if the theatrics are over and the sides are getting down to business.

The encounter with Democrats is important because any agreement to fund the government requires Democratic votes. Sixty votes are necessary to break a Senate filibuster. Republicans only have 51 members now. Fox News has long been told that House Republicans may struggle to pass a bill to pay for the wall with only GOP support.

“The fact is, you do not have the votes in the House,” Pelosi said to the president.

“Nancy, I do,” asserted Trump.

“Well, let’s take the vote and find out,” Pelosi suggested.

Sources scrambled to tell Fox News that Republicans were pondering putting a $5 billion wall funding bill on the floor. Passage of such a measure would serve as a rebuke to Pelosi and show that House Republicans stood foursquare with the president. The gambit would also shift the fight to the Senate. That’s where Republicans could pressure Schumer to cough up nine Democrats to hit the 60-vote threshold to overcome a filibuster. Otherwise, Republicans could again bill this as the “Schumer Shutdown.”

But if House Republicans had the votes to pass such legislation, why haven’t they approved that package on their own?

“We haven’t had to,” quipped one senior House Republican source.

When asked if Republicans would have the votes for such a border wall plan, Rep. Patrick McHenry, R-N.C., the GOP’s chief deputy whip, told Fox News, “we can pass it.”

The problem for any bill could hinge on attendance. The House currently stands at 433 members and two vacancies. The House has only averaged 392 members voting on the floor during each roll call since the midterm elections. Lots of lawmakers who lost or are retiring aren’t returning to Washington. The House never cracked even 400 members voting since the midterms until Tuesday. Some roll call votes have dipped as low as 374 members casting ballots.

So, few in Washington are looking forward to a Capitol Christmas. It may sound a lot like a wholesome drama from Hallmark. And if the sides strike an agreement and send everyone home for Christmas, this episode will be little more than a Very Merry Mix Up.