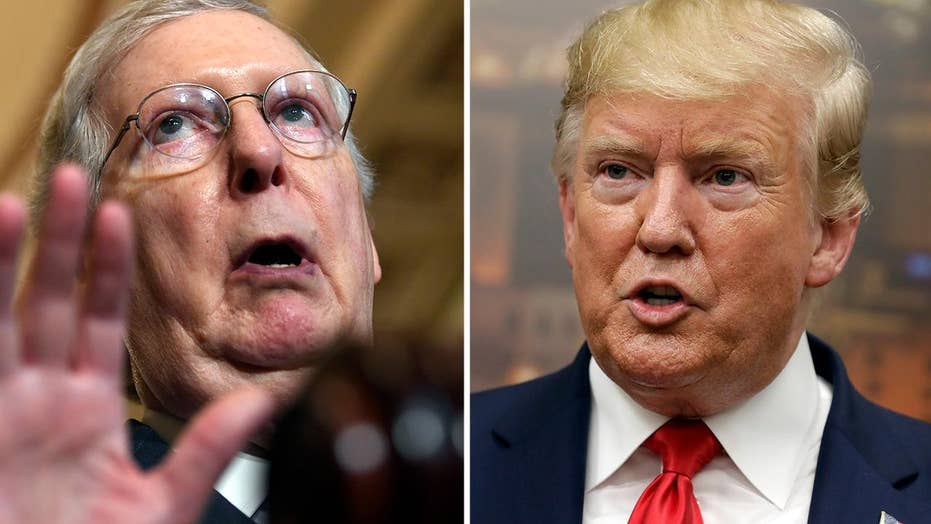 The Trump 2020 campaign expresses outrage that Hamas has a working Twitter feed but the Senate majority leader's campaign does not.

While Senate Majority Leader Mitch McConnell has pledged to take up the impeachment fight in the Senate should the House move against President Trump, a new campaign ad from the Kentucky Republican makes clear he's not wavering on his support for the president.

In the brief video, McConnell accuses House Speaker Nancy Pelosi of being “in the clutches of a left-wing mob” pushing her toward impeaching the president, while promising to stand in her way.

“All of you know your Constitution. The way that impeachment stops is with a Senate majority with me as Majority Leader,” he declares.

He closes by saying, “But I need your help,” as he requests campaign donations. Marine veterans Amy McGrath and Mike Broihier are among the Democrats currently vying for the chance to face McConnell in 2020.

While the primary is far from settled, McConnell’s ad indicates that in the current fight over impeachment, he intends to protect Trump from Democrats’ efforts to remove him, even before articles of impeachment have been drafted.

McConnell's support was not necessarily in question, but a few GOP senators in recent days have spoken out against the president, over his now-public request for Ukraine to "look into" Democratic presidential primary candidate Joe Biden and his son Hunter's dealings in the country. The criticism escalated after Trump made a similar request, during a session with reporters, to China.

Should the House vote to impeach Trump, the matter would go to trial before the Senate — where Republicans could easily brush back the impeachment effort if they largely hold together.

In a CNBC interview last week, McConnell acknowledged that he “would have no choice but to take it up” if the House approves impeachment articles. But he added the caveat, “How long you’re on it is a whole different matter.”

The odds of McConnell being put in that position seemingly increased over the weekend, as a senior member of the House Democratic Caucus told Fox News they believe there are enough Democrats currently supporting impeachment to get the required House majority to pass articles of impeachment. The senior member based this belief on the 227 Democrats in the House who have expressed support for an impeachment inquiry.

Democrats investigating Trump had earlier been focusing their efforts on suspicion that he obstructed justice by trying to impede the investigation of Russian election interference. Pelosi had been holding off impeachment efforts for months — but was eventually swayed after a whistleblower complaint accused Trump of pressuring Ukrainian President Volodymyr Zelensky over a potential Biden probe.

On Sunday, attorneys for the whistleblower confirmed they also are representing a second whistleblower with information backing up the initial complaint.

Trump has denied wrongdoing, while turning up criticism of the Bidens.

"The Biden family was PAID OFF, pure and simple! The fake news must stop making excuses for something that is totally inexcusable," he tweeted over the weekend.