Pelosi on impeachment: Sad time for our country

House Democrats believe they have the 217 votes needed to pass articles of impeachment against President Trump stemming from his Ukraine call -- enough votes to impeach Trump and send articles to the Senate -- even before their planned hearings or formal investigation.

A senior member of the House Democratic Caucus told Fox News on Sunday it's unlikely House Speaker Nancy Pelosi, D-Calif., will give in to the president's demand for an "inquiry vote."

The source said that while leadership hasn't officially whipped or nose-counted a vote to "impeach," they believed the numbers were there based on the 227 votes already on record for an inquiry and were working under that assumption.

When asked what could stop the process, the source said it was unclear but the caucus couldn't rule out the idea of "cold feet" among some Democrats,

The House currently has 433 members: 235 Democrats, 197 Republicans and one Independent. A bill must be passed by a simple majority, requiring at least 217 votes.

Even if 18 Democrats vote against the articles, the majority party could still have enough votes to pass impeachment.

Independent Rep. Justin Amash from Michigan has said he could vote in favor of impeachment, which meant Democrats could lose 19 votes and still pass impeachment articles. 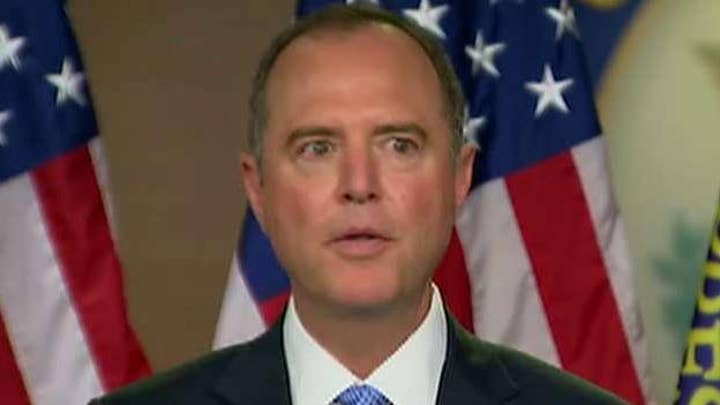 At least 25 Democrats in the House have indicated publicly they would vote to impeach Trump. Separately, at least 227 House Democrats publicly have supported opening an impeachment inquiry into the president.

In 1998, the House of Representatives approved two of four articles of impeachment against then-President Bill Clinton, sending them to the Senate where they were defeated.

Democrats could vote differently on various impeachment articles against Trump, were they to be brought forth.

Many Democrats in Congress have supported the formal impeachment inquiry, which was launched last month following an intelligence community member's whistleblower complaint alleging President Trump partook in a "quid pro quo" with Ukrainian President Volodymyr Zelensky during their July 25 call.

The whistleblower accused Trump of "using the power of his office to solicit interference from a foreign country in the 2020 U.S. election," claiming he used $400 million in military aid as leverage to push officials in Ukraine to launch an investigation into potential 2020 challenger Joe Biden and his son Hunter, along with their business dealings in Ukraine.

President Trump has forcefully denied the allegations, saying his call with the Ukrainian president was "perfect."

A memorandum of the July 25 call between Trump and Zelensky was released last month. It showed that while Trump sought a Ukrainian probe into the Biden family over corruption, he did not explicitly connect the aid to that effort.

Trump has said the impeachment inquiry was "another witch hunt" by the "Do Nothing Democrats."

Reports on Saturday of a second whistleblower who might have "more direct information" on the July 25 call put the White House back on defense.

"It doesn’t matter how many people decide to call themselves whistleblowers about the same telephone call—a call the president already made public—it doesn’t change the fact that he has done nothing wrong," Press Secretary Stephanie Grisham said.

"The first so-called second-hand information 'Whistleblower' got my phone conversation almost completely wrong, so now word is they are going to the bench and another 'Whistleblower' is coming in from the Deep State, also with second-hand info. Meet with [House Intelligence Chairman Adam] Shifty. Keep them coming," Trump tweeted Saturday night.