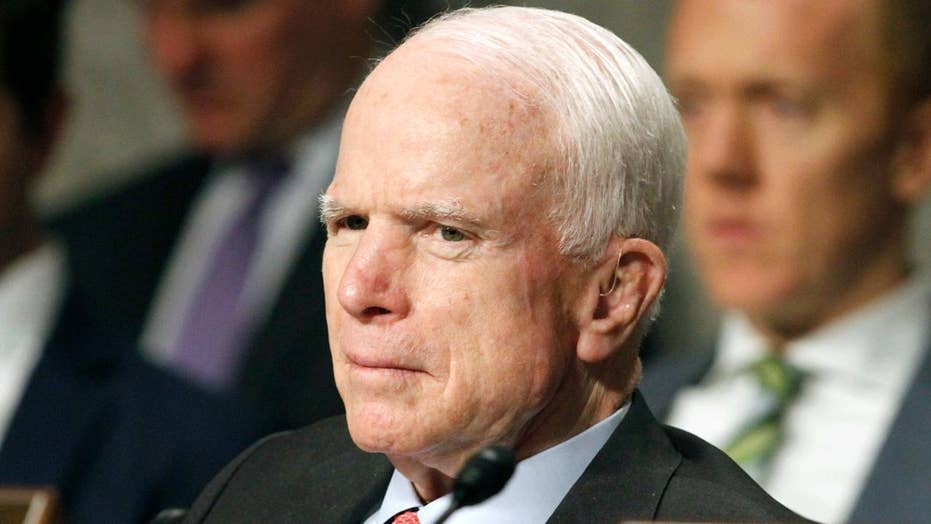 Sen. John McCain, R-Ariz., in an interview Sunday said he is more energetic than ever while he undergoes treatment for an aggressive cancer.

McCain, the 2008 Republican presidential nominee who made headlines after recently speaking out against the new GOP health bill, was diagnosed in July with a brain cancer.

He told "60 Minutes" that at the time of his diagnosis in July, he was driving back home to his ranch just outside of Sedona, Arizona. He received a call from his doctor. The doctor told him he has to come back to the Mayo Clinic in Phoenix.

McCain said it was Friday, and he’d rather head back on Monday. But the doctor said, “No, you have to come now. It’s very serious.”

“I kept saying to them, "Tell it to me straight." "Well, there's always this. There's always that." You know, and-- and I said, "I can take it. Just tell me." And then they were more forthcoming,” he said.

According to the American Brain Tumor Association, more than 12,000 people a year are diagnosed with glioblastoma, a particularly aggressive type of tumor. The American Cancer Society puts the five-year survival rate for patients over 55 at about 4 percent.

“The prognosis is very, very serious,” McCain said. “Some say three percent, some say 14 percent. It’s a very poor prognosis. So, I just said, ‘I understand, now we’re going to do what we can, get the best doctors we can find, and do the best we can.’ And, at the same time, celebrate with gratitude a life well-lived.”

He continued, "I am more energetic and more engaged as a result of this because I know I’ve got to do everything I can to serve this country while I can."

He went on, “I have feelings sometimes of fear of what happens, but as soon as I get that, I say, ‘Wait a minute — you’ve been around a long time, old man. You’ve had a great life and a great experience.’ I want when I leave, that the ceremony is at the Naval Academy and we just have a couple of people that stand up and say, ‘This guy, he served his country.'”