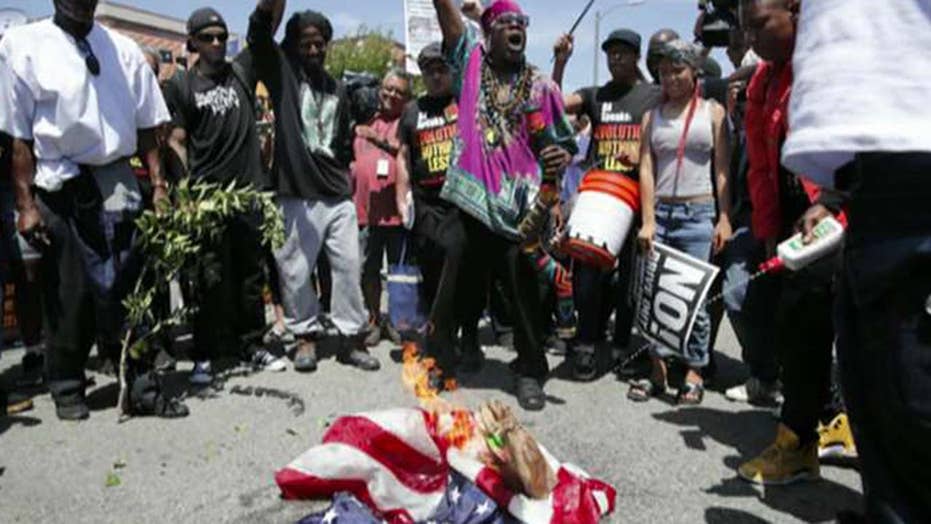 U.S. Rep. Maxine Waters said that the counterprotesters who burned and stomped on an American flag outside her California office this week, while exercising their right to express themselves, were also acting to further “their own agenda."

Waters issued a statement Saturday saying that the protesters who appeared outside her Los Angeles office Thursday did so despite her calls to “steer clear” of a planned protest by a far-right group, the Oath Keepers.

“Many people from within the community heeded my advice and steered clear of the event, but there were groups of individuals who felt compelled to participate and show their support for me despite my request,” her statement read.

The Oath Keepers event did not materialize.

People in a counter-protest try to open the door of a pickup truck occupied by two men outside the Los Angeles office of U.S. Rep. Maxine Waters, Thursday, July 19, 2018, in Los Angeles. (AP)

Waters said a group of nonpeaceful demonstrators, not necessarily  from her congressional district, participated in the counterprotests “not so much in support of me, but to seek press attention in furtherance of their own agendas.”

During Thursday’s protest, a vehicle with an American flag on the back approached and was stopped by the crowd. Some individuals opened the car doors while others grabbed the flag as the vehicle drove off. The flag was then stepped on and set ablaze. A few people cheered and someone yelled, "This is not the American flag, this is their flag."

“While I do not agree with torching the flag as a form of protest, I understand the Constitution guarantees everyone the right to this form of free expression,” Waters said.

“While I do not agree with torching the flag as a form of protest, I understand the Constitution guarantees everyone the right to this form of free expression.”

The Democratic lawmaker said she does not support any forms of violence, but stands by her “respect for the Constitution.”

Waters recently sparked anger among conservatives after she called on the public to "push back" on Trump administration officials spotted in public.