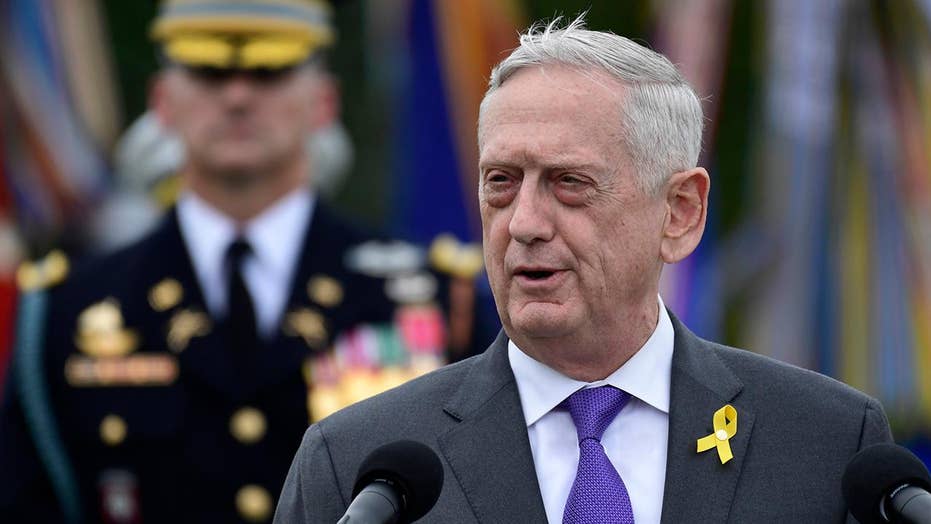 Outgoing Defense Secretary James Mattis wished a Merry Christmas "to all you lads and lasses holding the line in 2018" in one of his final messages to America's troops before his departure from the Trump administration.

"Since Washington crossed the Delaware at Christmas in 1776, American troops have missed holidays at home to defend our experiment in democracy," Mattis said in the 20-second video message. "To all you lads and lasses holding the line in 2018, on land, at sea, or in the air, thanks for keeping the faith.

"Merry Christmas and may God hold you safe," Mattis concluded.

The video was recorded Dec. 19, one day before Mattis submitted his resignation letter to Trump. On Sunday, Trump announced that Mattis would be leaving the Pentagon on Jan. 1, two months earlier than planned.

Later Monday, the Pentagon released Mattis' holiday letter to the troops, in which the defense secretary echoed many of the same themes as in his video message.

"To those in the field or at sea, 'keeping watch by night' this holiday season, you should recognize that you carry on the proud legacy of those who stood the watch in decades past," Mattis wrote. "In this world awash in change, you hold the line.

"Storm clouds loom, yet because of you your fellow citizens live safe at home," Mattis added. "Most don't know your names but all are confident their freedoms and their families will be kept safe. Far from home, you have earned the gratitude and respect of your fellow citizens and it remains my great privilege to serve alongside you."

Mattis resigned in protest of Trump's decision to pull all U.S. troops out of Syria. On Sunday, Fox News confirmed that Mattis had signed the official withdrawal orders, though Pentagon officials refused to discuss the specific timeline due to operational security.

Officials have told Fox News the U.S. has no plans to withdraw the more than 5,000 American troops in neighboring Iraq. Some of those special operations forces could be used for raids against “high value targets” in Syria from bases in Iraq if necessary, officials said.