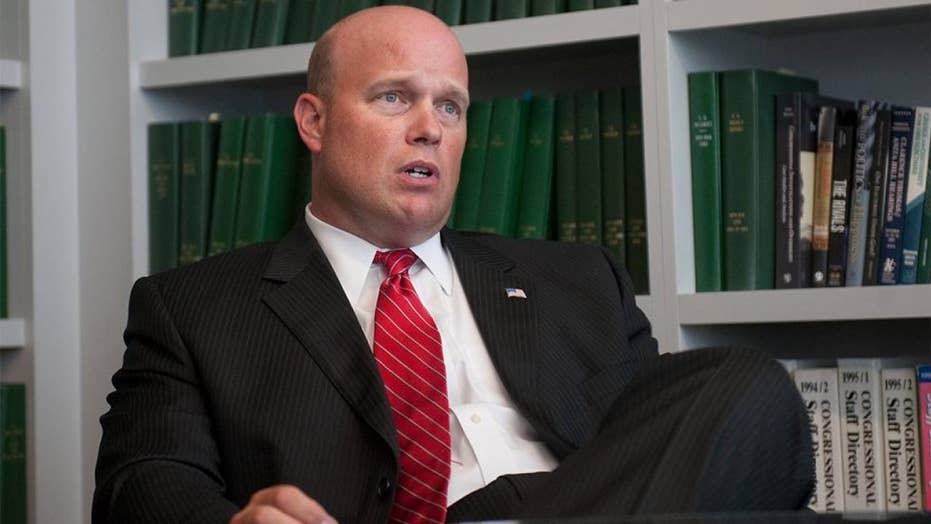 What to know about the new acting Attorney General, Matthew Whitaker

Matthew Whitaker took over as acting attorney general after Jeff Sessions announced his resignation from the position on Nov. 7  — hours after a handful of Election Day races rocked the country.

"We are pleased to announce that Matthew G. Whitaker, Chief of Staff to Attorney General Jeff Sessions at the Department of Justice, will become our new Acting Attorney General of the United States. He will serve our Country well...," Trump tweeted in response to Sessions' departure.

Whitaker, 49, already has some experience under his belt. Read on for three things to know about Sessions' replacement.

Whitaker is proud to be from Iowa, and has deep ties to the state — both personally and professionally.

He played in the 1991 Rose Bowl for the University of Iowa as a tight end, the Des Moines Register points out.

"He played football for Iowa (lettered three years at tight end) and was named Academic all-Big Ten in 1990, 91 & 92, was Academic All American in 1992 and won the prestigious Big Ten Medal of Honor in 1993," the University of Iowa boasts in an online profile of the politician, which noted Whitaker earned his undergraduate degree in communications and law degree and MBA in 1991 and 1995, respectively.

Whitaker is a "respected Republican," according to the Register. He has worn many hats throughout his political career, including serving as co-chairman for former Texas Gov. Rick Perry's 2012 presidential campaign, the newspaper reports. He was also executive director of Washington, D.C.-based Foundation for Accountability and Civic Trust, a non-profit dedicated to ethics and transparency in government, for roughly three years.

In 2002, he attempted to become Iowa's next treasurer but ultimately lost the race to Democratic incumbent Michael Fitzgerald. He later served as U.S. Attorney for the Southern District of Iowa from 2004 to 2009, earning support from President George W. Bush, according to the school.

His next political goal: U.S. Senate. The Republican ran for a U.S. Senate seat in Iowa in 2014 but was defeated by Joni Ernst in the primary.

In September 2017, he accepted a role as Sessions' chief of staff.

He previously commented on the possibility of Trump firing Sessions

Whitaker previously suggested Trump could possibly fire Sessions over his disappointment in the attorney general for recusing himself from Russia probe.

An infuriated Trump repeatedly lamented that he would have never selected Sessions if he had known the attorney general would recuse. The recusal left the investigation in the hands of Rosenstein, who appointed Mueller as special counsel two months later after Trump fired then-FBI Director James Comey.

“So I could see a scenario where Jeff Sessions is replaced with a recess appointment ... and that attorney general doesn’t fire Bob Mueller, but he just reduces his budget to so low that his investigation grinds to almost a halt," Whitaker said during an interview with CNN in July 2017 — just months before he became Sessions' chief of staff, according to The Washington Post.

“So I could see a scenario where Jeff Sessions is replaced with a recess appointment ..."

Asked if that would be to dwindle the special counsel's resources, Whitaker responded, "Right."

In an op-ed for CNN, Whitaker wrote: "Mueller has come up to a red line in the Russia 2016 election-meddling investigation that he is dangerously close to crossing."

Democrats on the House Judiciary Committee issued a subpoena for Whitaker ahead of a February hearing which could include questions about the Russia probe. The move has apparently infuriated the acting attorney general.

"Weeks ago, in good faith, I voluntarily agreed to appear and testify on February 8 before the House Judiciary Committee," Whitaker wrote in a letter to Committee Chairman Jerrold Nadler on Feb.7. "Unfortunately, the Committee now has deviated from historic practice and protocol and taken the unnecessary and premature step of authorizing a subpoena to me, the Acting Attorney General, even though I had agreed to voluntarily appear."

"Based upon today’s action, it is apparent that the Committee’s true intention is not to discuss the great work of the Department of Justice, but to create a public spectacle," Whitaker claimed on Feb.7.