A subpoena ordering Attorney General William Barr to testify before Congress would be quashed in court, according to Rep. Matt Gaetz, R-Fla.

Validating such a subpoena from the House Judiciary Committee would be both legally tenuous and a first in congressional history, Gaetz claimed in a Tuesday interview on "The Story."

"These are unenforceable actions legally," he charged.

"No court will uphold the subpoena as to Bill Barr, because the subpoena seeks to enforce something that is unprecedented in the House - and that is the attorney general answering questions from members of staff in the absence of an impeachment proceeding."

Gaetz claimed the situation is an effort by House Speaker Nancy Pelosi, D-Calif., to appease those in her caucus who want President Trump impeached.

"It has literally never happened before in the Judiciary Committee's history, outside of the scope of impeachment," he said. "I think it's largely because Nancy Pelosi is trying to feed her conference something to show momentum, even though it's not her desire to impeach." 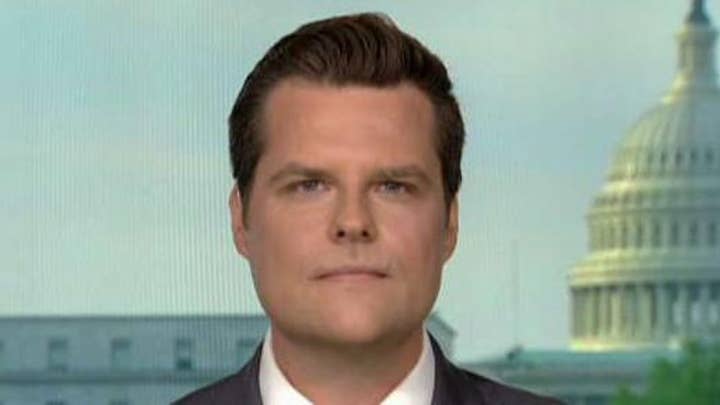 Chairman Jerrold Nadler announced Monday he was putting a hold on formal contempt proceedings against Barr, after reaching an agreement with the Justice Department to procure evidence related to the Russia investigation.

"I am pleased to announce that the Department of Justice has agreed to begin complying with our committee's subpoena by opening Robert Mueller’s most important files to us, providing us with key evidence that the Special Counsel used to assess whether the President and others obstructed justice or were engaged in other misconduct,” Rep. Nadler, D-N.Y. said.