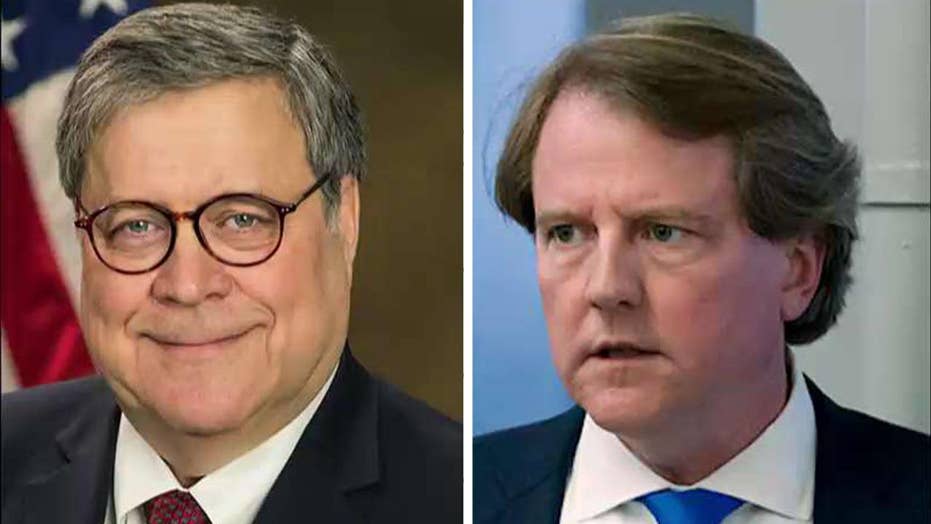 House Democrats signal a June 11 contempt vote is the next step to taking on the president; chief intelligence correspondent Catherine Herridge reports.

House Democrats on Thursday put the finishing touches on a resolution to hold Attorney General William Barr and former White House counsel Don McGahn in contempt of Congress for not complying with recent congressional subpoenas, amid demands for information related to Special Counsel Robert Mueller's investigation.

Fox News obtained a copy the resolution, which authorizes the House “to initiate or intervene in any judicial proceeding before a Federal Court” because Barr and McGahn failed to comply with House Judiciary Committee subpoenas. The committee had subpoenaed Barr for documents and McGahn for congressional testimony.

HOUSE DEMS TO VOTE ON HOLDING BARR, MCGAHN IN CONTEMPT

The Rules Committee is expected to take up this resolution on Monday afternoon. The contempt citation would then hit the floor for a full House vote Tuesday afternoon.

“We will not allow this president and his administration to turn a blind eye to the rule of law," Rules Committee Chairman James McGovern, D-Mass., said in a statement.

This “civil contempt” resolution is intended to use the courts to get them to comply with the subpoenas. The House has so far not elected to pursue “inherent” contempt, where the House would enforce contempt on its own, perhaps through arresting or fining either Barr or McGahn.

Last month, the House Judiciary Committee voted to recommend holding Barr in contempt of Congress for defying the subpoena.

As for McGahn, the White House had instructed its former top lawyer not to testify, saying he is legally immune from being compelled to testify about privileged discussions in the course of his official duties. Democrats have responded that McGahn waived that privilege by agreeing to speak to Mueller.

The move toward floor action next week comes as the DOJ continues to communicate with the House Judiciary Committee. The department earlier this week said it was "prepared to resume negotiations with the committee regarding accommodation of its narrowed Subpoena" -- as long as Democrats removed the "threat of an imminent vote by the House of Representatives to hold the attorney general in contempt."

The threat apparently remains, but House Judiciary Committee Chairman Jerry Nadler said late Tuesday that he is open to negotiating with the DOJ "without conditions."

A contempt vote would be historic, but not unprecedented. In 2012, the GOP-controlled House voted to hold then-Attorney General Eric Holder in contempt for failing to comply with investigations into the Obama administration's failed gun-running sting operation known as "Fast and Furious." Holder became the first-ever sitting Cabinet member to be held in contempt of Congress in that manner.