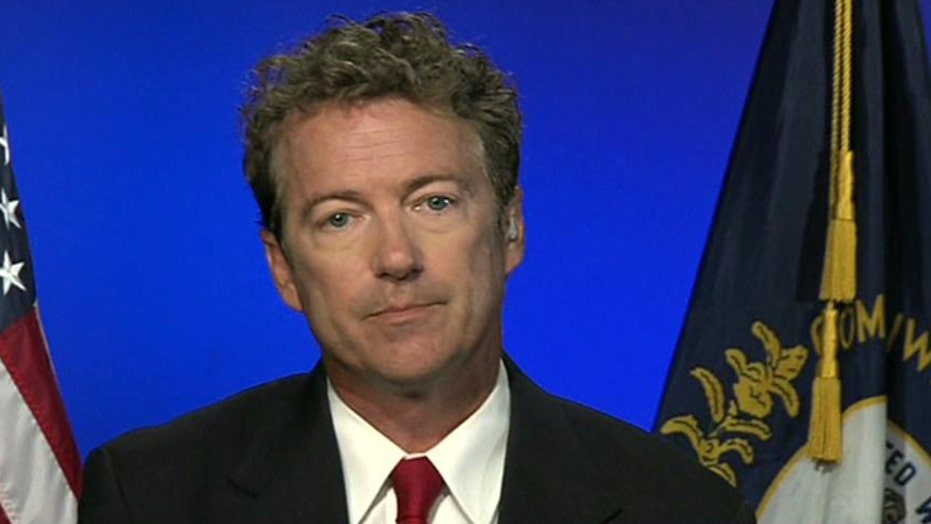 From his criticism of the Federal Reserve to his mean libertarian streak, Sen. Rand Paul is certainly his father's son.

But on the issue of Israel, the Kentucky Republican falls far from the tree. Or at least, he'd like voters to think so.

The first-term senator -- whose father Ron Paul was a staunch critic of America's Israel policy and seen in some circles as outright hostile to the Jewish state -- has in recent months taken a distinctly different attitude toward the U.S.-Israel relationship.

He visited Israel in January 2013. He calls himself an Israel supporter.

And after the tragic abduction and killing of three Israeli teens in the West Bank, Paul has ratcheted up those statements of support even more.

In response to the deaths of the Israeli teens, the senator who often rails against military intervention showed a hawkish side, in a blistering column that would have been unimaginable coming from his father.

In the column, published in the National Review, he criticized the Obama administration for issuing -- alongside offering its condolences -- a call for restraint.

"I think it is clear by now: Israel has shown remarkable restraint. It possesses a military with clear superiority over that of its Palestinian neighbors, yet it does not respond to threat after threat, provocation after provocation, with the type of force that would decisively end their conflict. But sometimes restraint can work against you. Sometimes you just have to say, enough is enough."

In Washington, Paul, a potential 2016 presidential candidate, is now renewing the push for a bill that would effectively cut off aid to the Palestinian government.

Paul introduced the Stand with Israel Act in late April, calling for a halt to U.S. aid to the Palestinian government unless they meet certain conditions like recognizing Israel's right to exist and renouncing terrorism -- steps unlikely to happen if a unity deal between Hamas (which controls the Gaza Strip) and Fatah (which controls the West Bank) holds.

Though the teenagers' deaths are under investigation -- and both sides are clashing over the death of an Arab teenager, allegedly at the hands of Israeli extremists -- Paul argues that U.S. aid could soon be going to those who perpetrated the abductions.

"Most Americans would be appalled if they knew that American tax dollars could soon be going to Hamas," he told Fox News, saying he plans to press the matter again in the Senate next week.

"I will fight tooth and nail to make sure that no money ever goes to Hamas," he said. "Israel's being attacked on a daily basis by Hamas."

Paul has spoken out against foreign aid in virtually all forms during his four years in the Senate, and previously slammed aid to Israel as well. But he has since modified that position, calling for the U.S. to first suspend aid to countries and entities hostile to U.S. interests, and eventually wean Israel off the Washington spigot.

The senator's father, a longtime Texas congressman and three-time presidential candidate, spoke out against U.S. aid to Israel as well. But he also repeatedly voted against Israel on the floor, including opposing a 2009 resolution recognizing Israel's right to defend itself against attacks from the Gaza Strip during the Gaza War. He was the only Republican to oppose that resolution.

His son's column this week in the National Review took the opposite stance.

Some are skeptical of Paul's Israel stance and his latest Palestinian aid cutoff bill, which have been the subject of numerous columns in American and Israeli media. The statements from the younger Paul come as he and an already-crowded potential field of in-demand Republicans weigh whether to run for the White House in 2016.

While Paul is burnishing his foreign policy chops, so is the man seen as his closest contemporary, and perhaps rival, Sen. Ted Cruz, R-Texas.

Cruz traveled to Israel earlier this year. Cruz also took a swipe at Paul during an interview in March with ABC News.

"I'm a big fan of Rand Paul. He and I are good friends. I don't agree with him on foreign policy," Cruz said. "I think U.S. leadership is critical in the world."

Paul, in response, told Fox News that Cruz was "mischaracterizing" his views.

"I've always been a big fan of peace through strength," Paul said.