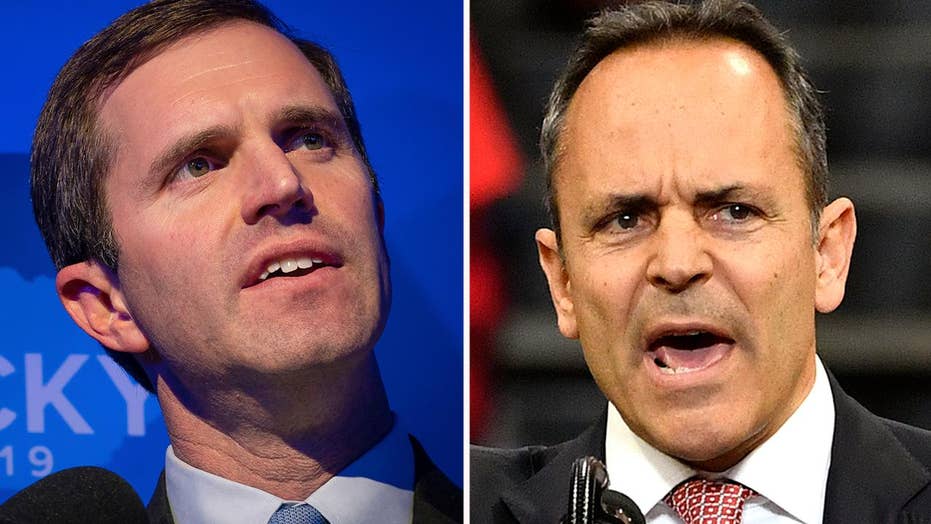 Kentucky’s Libertarian Party appears to be relishing its role as a potential spoiler in the state’s gubernatorial contest – as incumbent Republican Gov. Matt Bevin trails the state's Democratic attorney general in the results of the closely watched contest Tuesday.

"We are always happy to split the vote in a way that causes delicious tears. Tonight there are plenty of delicious tears from Bevin supporters," the party said in a Facebook post Tuesday night.

In the contest, Democratic state attorney general Andy Beshear leads Bevin by 5,333 votes out of more than 1.4 million cast, with 100 percent of precincts reporting in the Kentucky election.

Libertarian gubernatorial nominee John Hicks grabbed 28,426 votes – or approximately 2 percent of the vote – far more than the vote difference between Beshear and Bevin.

A defiant Bevin declared on Tuesday night that "we are not conceding this race by any stretch.” And the GOP incumbent cited unspecified "irregularities.” That could potentially spark weeks of uncertainty in a contest that the AP said was too close to call but that Kentucky’s Democratic secretary of state called for Beshear.

Beshear – the son of a former two-term Democratic governor -- on Wednesday told reporters that “last night the election ended” and said “it’s time to move forward with a smooth transition.”

It’s hard to say whether Hicks, the Libertarian nominee, took more votes away from Bevin or Beshear. The candidate, a Vietnam War veteran and internet technology specialist, ran on a platform calling for reforming and downsizing the state government and stronger restrictions on abortion – stances that would most likely appeal to conservative voters.

In their statement, the Libertarian Party took aim at Bevin, a deeply unpopular governor who’s battled with the state’s GOP-dominated legislature and even his own lieutenant governor.

“Had Matt Bevin not ditched his liberty Lt Governor for a Mitch McConnell picked anti liberty, corrupt running mate who has tried to eliminate Kentuckians jury trial rights, had Matt Bevin not presided over a huge sales tax increase, had Matt Bevin supported any of our key issues on criminal justice reform, marijuana legalization, expanded gaming, cutting taxes, or acted with the least bit of civility, we probably would not have run a candidate,” the party emphasized.

“Of course, he did the opposite. And here we are,” they added. “We split the vote. And we could not be more thrilled.”

President Trump wasn’t on the ballot, but he was definitely on the minds of Kentucky voters. The president teamed up with Bevin at a rally on Election eve. And the governor for weeks had repeatedly tried to nationalize the contest, praising Trump and slamming Democrats over the House impeachment inquiry into the president.

Trump appeared to help keep the contest close, but apparently couldn’t pull Bevin over the finish line. Many political pundits painted the apparent GOP loss of the Kentucky gubernatorial race and the Democrats retaking of the majorities in both chambers of Virginia’s legislature as a major defeat for the president, but Trump wasn’t having any of that.

Pointing to victories by Republicans in Kentucky’s other statewide contests as well as the GOP victory in Mississippi’s gubernatorial showdown, Trump tweeted “Won 5 out of 6 elections in Kentucky, including 5 great candidates that I spoke for and introduced last night. @MattBevin picked up at least 15 points in last days, but perhaps not enough (Fake News will blame Trump!). Winning in Mississippi Governor race!”

While the president tried to put a positive spin on the results and emphasize Bevin’s baggage, Democrats pointed to Trump’s own comments Monday night in Kentucky, when he told the state’s Republican voters that the race’s outcome would be seen as a reflection in him.

But veteran Republican strategist Colin Reed said trying to read what the 2019 contests mean for the 2020 election is “just speculative.”

Pointing to the “doom and gloom” scenarios being peddled Wednesday morning, Reed emphasized “I think it’s a mistake to extrapolate too much from Kentucky.”

“It’s always better to win than lose obviously but Matt Bevin was a historically unpopular figure running in a state where Democrats have dominated at the state level for the past 100 years. There have only been four Republican governors elected in Kentucky since 1920. Every other statewide candidate won in Kentucky,” he said.