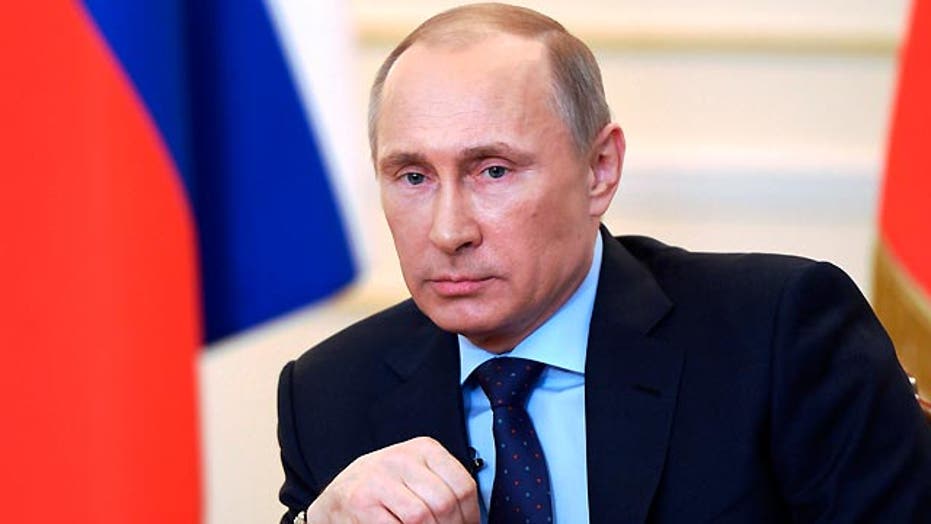 With all eyes on the Russian leader before and during the Winter Olympic games in Sochi, how could the intel community not know he had the Ukraine in his sights?

A congressional committee has launched a review to find out why U.S. intelligence agencies disagreed on Russia's intentions ahead of its intervention in Ukraine, as lawmakers question why there was no clear warning of Moscow's military action.

The House Intelligence Committee is reviewing what caused the differing assessments of possible Russian action by analysts with the Pentagon and the Central Intelligence Agency, according to The Wall Street Journal.

Pentagon analysts said last Friday that there would be no movements in the next 24 hours, while Central Intelligence Agency analysts were "more circumspect," indicating the possibility for intervention, one U.S. official told the newspaper.

Rep. Mike Rogers, R., Mich., the committee's chairman, told The Wall Street Journal on Tuesday that his committee had begun an examination to find out "what was missed in some of the [Russian] intentions piece."

Russia took over the strategic Crimean Peninsula on Saturday, placing its troops around its ferry, military bases and border posts. Two Ukrainian warships remained anchored in the Crimean port of Sevastopol, blocked from leaving by Russian ships.

But a classified report earlier in the week by the Pentagon's Defense Intelligence Agency concluded that Russian military drills near the Ukrainian border would not provide a pretext for intervening in Crimea, The Los Angeles Times reported.

A separate classified report from the CIA stated that some signs pointed to a Russian intervention, but that one was not expected, officials told the paper.

“I think the Russian steps came as a surprise,” Rep. Adam Schiff, D-Calif., an intelligence committee member, told The Los Angeles Times. “I think in part it comes from trying to predict a fairly unpredictable [Russian President] Vladimir Putin.”

A Pentagon spokesman declined requests for comment from The Wall Street Journal and The Los Angeles Times, but the CIA defended its assessments.

"Since the beginning of the political unrest in Ukraine, the CIA has regularly updated policy makers to ensure they have an accurate and timely picture of the unfolding crisis," CIA spokesman Chris White told the Journal. "These updates have included warnings of possible scenarios for a Russian military intervention in Ukraine."

Rogers told the Journal that some analysts "came to the wrong conclusion," but that he wouldn't characterize the issue as an intelligence failure.

Meanwhile, some Senate Intelligence Committee members left a closed-door briefing on Ukraine and other issues on Tuesday with questions of why there was no clear warning of how Russia would respond to the political unrest in Ukraine.

“Well, I’m not sure what the issue is," Chambliss said. "I mean obviously that’s why you get briefings to try to deep dive into it to see whether it’s a lack of intelligence gathering or whether there were some signs that analysts just didn’t see. But it’s pretty clear that there was no indication that this was coming like it did."

“From everything I’ve seen, this was not anticipated,” King told the publication. “I think there will have to be a whole evaluation of what our links into Russia are and [into] determining their policy.”

“As far as the administration, I think they had to be taken off guard,” he said. “They were making these very tough pronouncements that there will be consequences and he won’t do it. I don’t think they would have done that if they were thinking that Putin would do this.”

Shawn Turner, spokesman for the Office of the Director of National Intelligence, said government officials would cooperate with the congressional review.

"We are aware that Chairman Rogers has asked his staff to work with intelligence agencies to get a better understanding of the community's early analysis of the situation in Ukraine," Turner told the Journal. "As always, we look forward to working with the committee in support of oversight efforts."

Click here for more from The Los Angeles Times.