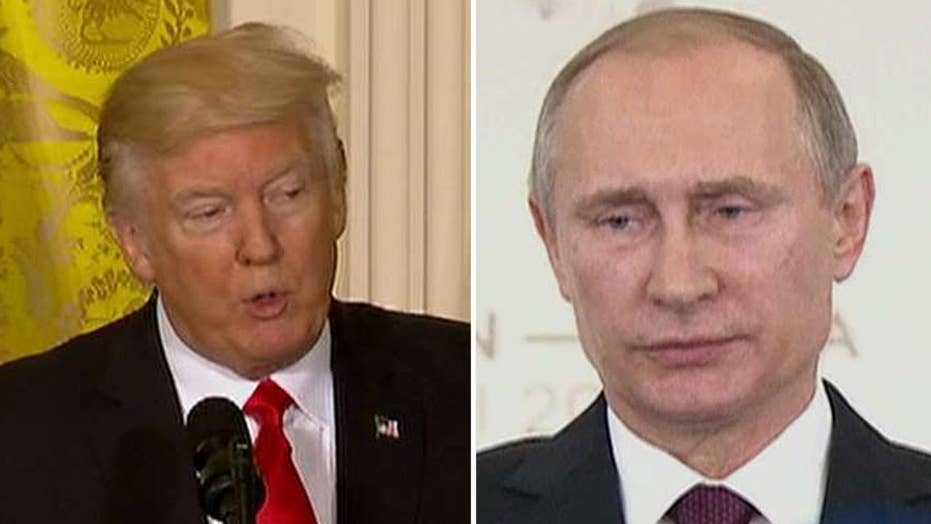 President Donald Trump and Russian counterpart Vladimir Putin on Saturday spoke for the first time since Trump was sworn in -- a much anticipated talk about future relations between two world powers with a complicated history, including recent reports that Putin and Russia worked to influence the 2016 White House race on behalf of Trump.

Trump and Putin were expected to discuss the sanctions that Trump’s predecessor, President Obama, imposed on Russia for annexing Ukraine's Crimea Peninsula in 2014.

The White House has yet to release details of the conversation.

The Kremlin said the world leaders talked about Ukraine, Iran’s nuclear program, North Korean aggression and better trade and economic ties but made no mention of the sanctions.

The message on the Kremlin website, translated to English, also stated that Trump and Putin talked about coordinating efforts to defeat the Islamic State and other terror groups around the world, particularly in Syria, torn apart in a bloody civil war that is approaching its sixth anniversary.

Putin has backed the regime of Syrian leader Bashar al Assad, while the United States favors an end to his rule.

The Kremlin also stated the leaders are working on a face-to-face meeting, but no date has been set.

The Putin call was just one of five Saturday by Trump to world leaders.

In Trump's first call of the day, he and Abe discussed the importance of the U.S.-Japan alliance and cooperation on regional and global issues including investments and bilateral trade, according to the White House.

Trump also affirmed the United States’ commitment to ensuring the security of Japan, amid the continuing threat of North Korea. And the two leaders discussed the significance of Secretary of Defense James Mattis' upcoming visit to the region, including Japan, the White House said.

The annexation was widely considered an act of aggression toward neighboring Ukraine's effort to have a more democratic government.

Even the possibility of Trump lifting the sanctions has brought widespread concern, and criticism, from Washington Democrats and Republicans and from around the world.

"For the sake of America’s national security and that of our allies, I hope President Trump will put an end to this speculation … and reject such a reckless course,” Arizona GOP Sen. John McCain said in a statement. “If he does not, I will work with my colleagues to codify sanctions against Russia into law."

Trump had said that he is prepared to review the sanctions, as part of a large effort to improve relations with the United States’ former Cold War rival.

But he was noncommittal Friday, saying, "We'll see what happens. As far as the sanctions, very early to be talking about that."

Trump made the remarks Friday alongside British Prime Minster Theresa May, whose country -- as part of the European Union -- also levied sanctions on Russia following its provocations in Ukraine. May has said the sanctions should remain in place.

May’s White House trip made her the first world leader to visit Trump since he took office last week.

Putin and Trump spoke after Trump’s presidential victory in November. Though they have never met, each has expressed admiration for each other’s forceful leadership style.

The report found no evidence of vote tampering. But months of stolen, then leaked emails from the Democratic National Committee and Clinton campaign Chairman John Podesta had some damaging impact on Clinton’s presidential bid.

Trump has been openly critical of the report, and the Kremlin has denied involvement in the race.

Recent polls show that anti-American sentiment in Russia has dropped to 56 percent. Pollsters say it’s due to Trump’s indication he wants to improve relations.

The Kremlin has welcomed Trump's promises to mend ties with Moscow, which also has been badly strained by the war in Syria.