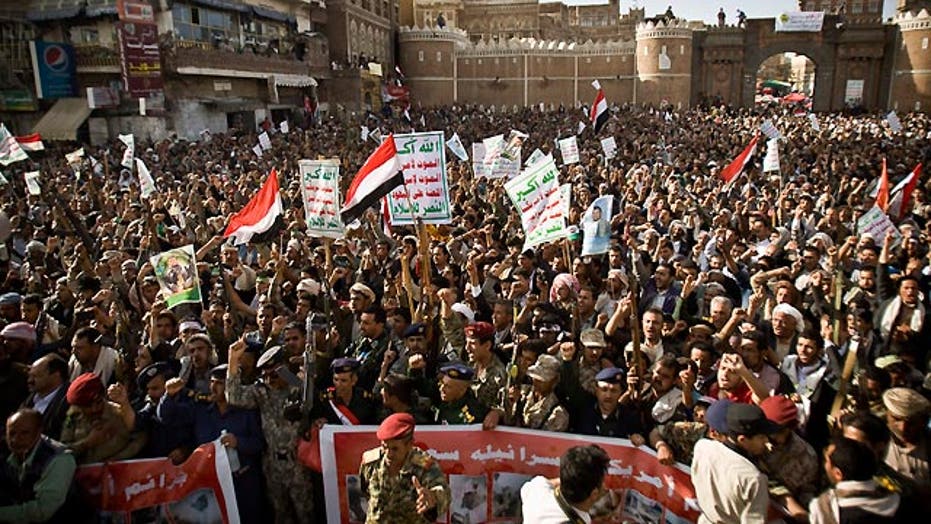 Growing chaos in Yemen sparks new terror concerns for US

Gauging the threat of situation

Secretary of State John Kerry warned Iran over its increased involvement in Yemen's civil war Wednesday, vowing that the U.S. would not "stand by" as the Middle East became destabilized.

Meanwhile, Iran President Hassan Rouhani said Thursday that a Saudi-led campaign of airstrikes against Yemen's Shiite rebels, known as Houthis, was a "mistake." Rouhani did not single out any country in particular but said, "You learned that it was wrong. You will learn, not later but soon, that you are making mistake in Yemen, too."

Speaking on the "PBS Newshour" Wednesday, Kerry said that Tehran was "obviously" supplying the rebels, whose military advances forced Yemen's U.S-and Saudi-backed president to flee last month. In response, Saudi Arabia and its Gulf allies have been carrying out airstrikes against Houthi targets since March 26.

"Iran needs to recognize that the United States is not going to stand by while the region is destabilized or while people engage in overt warfare across lines — international boundaries — in other countries," Kerry said. "We have an ability to understand that an Iran with a nuclear weapon is a greater threat than an Iran without one. And at the same time we have an ability to be able to stand up to interference that is inappropriate or against international law, or contrary to the region’s stability and interest and those of our friends."

Kerry's interview was broadcast on the same day that Iran said it was sending a destroyer and another naval ship to the strategic Bab al-Mandab strait. Iranian Rear Adm. Habibollah Sayyari was quoted as saying that the ships were part of an anti-piracy campaign to "safeguard naval routes for vessels in the region" by the English-language state broadcaster Press TV.

The comments by Kerry and Rouhani, as well as the Iranian naval maneuvers underscore the growing international tensions surrounding the chaotic fighting in Yemen, with the U.S. shoring up the Saudi-led forces on one side and Iran allegedly backing the Houthis on the other – though Iran and the rebels deny any direct military assistance.

Pentagon spokesman Col. Steve Warren said Wednesday he could not say whether “Iranian money or equipment” has been delivered to the Houthis, but “we know the Iranians are partnered with the Houthis and they are working together.”

The fighting and international involvement threaten to hang over ongoing nuclear talks, which yielded a deal framework last week in Switzerland. The U.S., Iran and five other world powers are trying to strike a final deal by June – though critics have pointed to Iran’s involvement in Yemen and elsewhere as a serious cause for concern.

The unrest has also provided cover for Al Qaeda's Yemen branch, which the U.S. considers the world's most dangerous wing of the group, to make "great gains" on the ground. That in turn has caused Washington to rethink how it prevents it from launching attacks in the West.

On Thursday, Iranian Foreign Minister Javad Zarif met with Pakistan's prime minister in an effort to to push for peace talks to resolve the crisis.

Zarif's visit came as Pakistan's parliament is debating whether to contribute forces to the Saudi-led air campaign. The airstrikes against the Houthis and their allies, including loyalists of former President Ali Abdullah Saleh, have so far failed to stop the rebels' advance on Aden, Yemen's second-largest city, which was declared a provisional capital by President Abed Rabbo Mansour Hadi before he fled to Saudi Arabia.

Humanitarian groups in Yemen say they are running out of supplies and have called for a temporary halt to the fighting to allow aid into the country. The World Health Organization said Tuesday at least 560 people have been killed in the past weeks and 1,768 have been wounded, many of them civilians. It said another 100,000 have fled their homes.