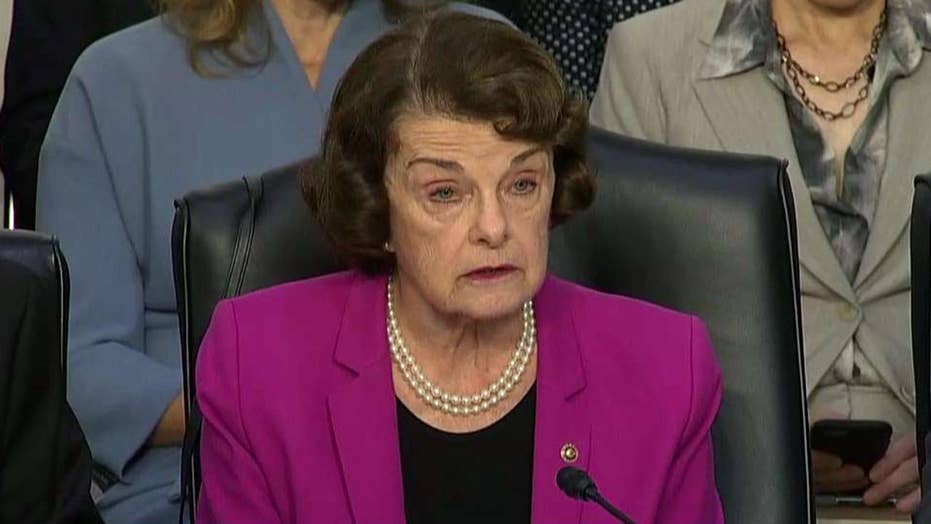 Feinstein: There is frustration over this nomination process

Brett Kavanaugh’s Supreme Court confirmation hearing got off to a rocky start as multiple Democrats interjected and called for a delay – citing complaints that they haven't seen all his records and only just received some of them.

Kavanaugh, 53, has served for the past 12 years on the federal appeals court in Washington, D.C. He was involved with the independent counsel’s report in laying out the legal framework supporting then-President Bill Clinton’s impeachment and served in key positions in the White House when George W. Bush was president.

The contentious hearing has repeatedly been interrupted and fallen behind schedule as Democrats have called to pause the hearing due to document requests.

Sen. Kamala Harris, considered a potential 2020 Democratic presidential contender, raised objections to the recent release of some 42,000 documents just before the hearing kicked off; others called for a delay until the White House reverses course on its withholding of more than 100,000 pages of Kavanaugh's record related to his time in the Bush administration.

Read on for a look at what lawmakers have had access to – and what Democrats want.

What documents does the committee have?

In all, about 267,000 pages of Kavanaugh documents from his Bush years have been made public with more than 147,000 pages given just to the committee.

Former President George W. Bush’s attorneys told the Senate Judiciary Committee Bush requested they “err as much as appropriate on the side of transparency and disclosure” in releasing documents to the committee. It said it withheld more than 46,000 documents – from both the public and the committee – because they were State Department records Kavanaugh possessed for consultation, did not fall within the time frame requested by the committee or were marked “protected by constitutional privilege” by the White House or Justice Department.

Senate Judiciary Committee Chairman Chuck Grassley said the panel had been given access to more than 480,000 pages of emails and other documents from his service as an executive branch lawyer, more than 10,000 pages of judicial writings and 17,000 pages of speeches, articles, teaching materials and other items Kavanaugh attached to his 120-page questionnaire response.

Grassley, a Republican, also said the committee was able to review some 307 opinions he authored as well as hundreds more he joined.

“This is a half million pages of paper – more than the last five confirmed Supreme Court nominees combined,” Grassley, who has defended the document production as the most open in history, said.

Additionally, some 42,000 documents were made available to the committee relating to Kavanaugh’s work with past administrations just before the hearing’s start on Sept. 4.

Democrats vociferously argued for a delay in the hearing in order to have more time to review the documents. Senate Democratic Leader Chuck Schumer, in particular, said it was impossible to go through them all in time for a fair hearing.

What do Democrats want?

The White House blocked about 100,000 documents pertaining to Kavanaugh’s records from the Bush White House on the basis of presidential privilege – a point of contention for Democrats.

“We don’t know what is being hidden,” Sen. Patrick Leahy, D-Vt., said during the hearing.

Schumer blasted President Trump ahead of the hearing for the withholding of certain documents.

“President Trump’s decision to step in at the last moment and hide [100,000] pages of Judge Kavanaugh’s records from the American public is not only unprecedented in the history of [Supreme Court nominees], it has all the makings of a cover up,” Schumer said in a tweet.

Democrats have also blasted Republicans for not requesting certain records, such as those pertaining to Kavanaugh’s time as a staff secretary.

Sen. Dick Durbin, D-Ill., claimed Senate Democrats were not able to see records pertaining to “35 months of public service” as they “cannot even be considered.”

But Grassley, who has repeatedly rebuffed demands to postpone the hearing, said those documents “are the least useful in understanding his legal views and [are] the most sensitive to the executive branch.”

“What is being hidden and why?” Leahy asked Tuesday.

Fox News’ Jennifer Earl and The Associated Press contributed to this report.