Judge Napolitano on if Kavanaugh's nomination is in jeopardy

The White House said Monday that the Senate Judiciary Committee is leaning toward inviting Supreme Court nominee Brett Kavanaugh’s accuser to testify before the panel, as the woman’s attorney said she would be willing to appear.

Christine Ford, a California-based professor, revealed her identity in a Washington Post report on Sunday, following her letter obtained by Sen. Dianne Feinstein, D-Calif., alleging sexual assault. She said that Kavanaugh, 36 years ago while in high school, pinned her down, tried to remove her bathing suit and put his hand over her mouth when she attempted to scream.

Kavanaugh has denied the allegation, and the White House has stood by that denial.

“I categorically and unequivocally deny this allegation. I did not do this back in high school or at any time,” Kavanaugh, 53, said in a statement last week.

But White House Counselor Kellyanne Conway said Monday on “Fox & Friends” that both Ford and Kavanaugh should be heard on the accusations. 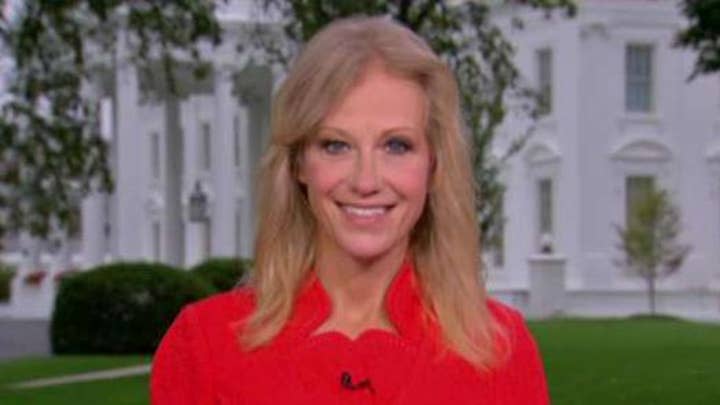 Conway said the committee will decide “how and in what form” Ford would share her account, suggesting it could be in a public setting or even over the phone. Conway, though, noted that Ford’s account, while it should be considered, should also be “weighed against” other evidence.

“This has to be weighed against what we already know—which is that Judge Kavanaugh is a man of good character and integrity,” Conway said, noting he has been through half a dozen rounds of FBI “vetting” and has been “lauded by women in every aspect of his life,” including former classmates, and mothers of young girls he coaches in basketball.

Meanwhile, Ford’s attorney Debra Katz said on NBC’s “Today” that her client would be willing to appear before the committee.

“She is willing to take whatever it takes to get her story forth,” Katz said, answering “yes” to whether Ford will agree to testify under oath.

Katz said bluntly that Ford is alleging Kavanugh attempted to rape her.

"She clearly considers this an attempted rape. She believes that if it were not for the severe intoxication of Kavanaugh, she would have been raped," Katz told "Today."

Kavanaugh’s confirmation vote before the committee is scheduled for Thursday at this point. The accusations have thrown the timeline into doubt, however. Many Democrats have called for a delay in the vote, and a handful of Republicans have opened the door to that possibility.

But Conway said there should not be a delay, noting that even without Ford’s allegations, many Democratic senators were planning to vote against him.

“Let’s not fool ourselves--long before this happened there were Democrats saying they would not vote for Judge Kavanaugh or anyone President Trump nominated for the Supreme Court,” Conway said. “Let’s make very clear that these Democratic senators … were not interested in Judge Kavnaugh’s significant record, his character and integrity, as testified to by many women.”

“She should testify under oath. The Senate Judiciary Committee looks like they are heading that way,” she said.