Kamala Harris’ career, from California district attorney to the Senate

Kamala Harris’ rise to political power started in California, where she served as a district attorney and attorney general for the state. And it might culminate in a 2020 presidential run.

Sen. Kamala Harris spent her first day as a Democratic presidential candidate expressing regret over how certain cases were handled while she worked as a top state prosecutor in California.

But during a press conference Monday afternoon at Howard University in Washington, Harris also defended her record amid liberal criticism, saying she was proud of her actions as California attorney general and San Francisco district attorney.

“I had a host of clients that I was obligated to defend and represent,” Harris said of being California’s attorney general. “And I couldn’t fire my clients. And there were unfortunately situations that occurred where my clients took positions that were contrary to my beliefs.”

KAMALA HARRIS ANNOUNCES SHE IS RUNNING FOR PRESIDENT IN 2020

Harris was asked by one reporter about criticism from some Democrats for her role backing the California Department of Corrections in denying gender reassignment surgery to inmates. Harris argued decisions in that case were made by other people in her office who “do the work on a daily basis.”

On the issue of gender reassignment surgery for inmates, Harris claimed she “worked behind the scenes” to ensure that the Department of Corrections “would allow transitioning inmates to receive the medical attention that they required, they needed and deserved.”

But she didn’t directly answer a question from a reporter on whether inmates from around the country should have access to gender reassignment surgery. Harris said transgender people “for too long” have “been the subject of bias, and frankly a lack of understanding about their circumstance and their physical needs, in addition to any other needs they have. And it’s about time we have a better understanding of that.”

Harris announced earlier Monday she is running for president, joining a fast-growing crowd of Democrats jumping into the 2020 race.

But even before that announcement, her pre-Senate record in California was attracting new scrutiny from liberals.

University of San Francisco associate law professor Lara Bazelon recently argued in an op-ed piece that the perception that Harris acted as a “progressive prosecutor” during her tenure as the district attorney of San Francisco and then California’s attorney general is at odds with her actions. 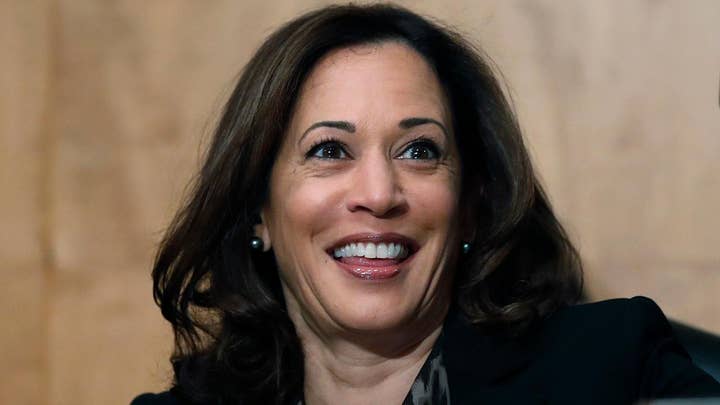 During Monday’s press conference, Harris was also asked about her office’s handling of sex crimes. “I can tell you of cases where I really regret that we were not able to charge somebody that I knew molested a child but the evidence wasn’t there,” she said.

Earlier Monday, Harris paired the announcement with the release of a campaign video on Twitter in which she said, "Truth. Justice. Decency. Equality. Freedom. Democracy. These aren’t just words. They’re the values we as Americans cherish. And they’re all on the line now."