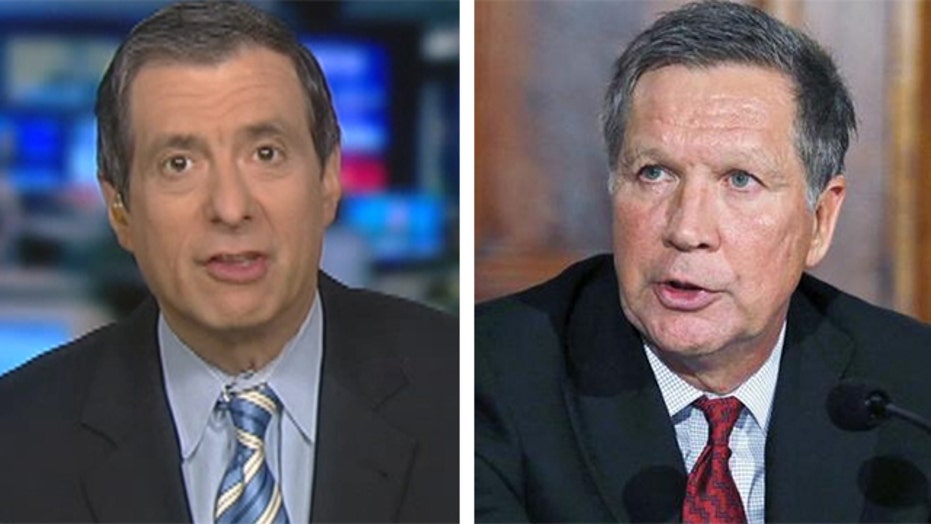 John Kasich is spending an awful lot of time talking about running for president.

He’s hung out with reporters for so many hours that you wonder how he has time to run the state of Ohio.

Not that I’m objecting to the kind of unfettered access the governor is providing. The result is some really rich stories that go beyond the usual sound bites to provide a textured portrait of Kasich as a fast-talking and bombastically boastful, a caustic contrarian and compassionate conservative who is not afraid to take on his own party.

I have no idea whether the former congressman and onetime Fox News host will wind up taking the 2016 plunge. But he seems to be enjoying publicly ruminating about the possibility.

The field is getting as crowded as a New York subway car—Bush, Walker, Rubio, Cruz, Paul, Huckabee, Carson, Christie, Santorum, Perry, Fiorina, and maybe Graham, Pataki and a few others. But Kasich would be, well, a little different.

He did a swing through New Hampshire this week, spoke to Greta Van Susteren, chatted up donors in New York yesterday and generally acted like a candidate in the midst of the media’s Cruz-a-thon.

At Yahoo Politics, Andrew Romano quotes a number of rants by the “provocative, self-important and more than a little abrasive” Republican:

“Energy is what drives things. Excitement! Progress! Innovation! Forward! Discover America! Find the Pacific Ocean! Climb the mountain! Chart the course! Change the world! Land on the moon! Go to Mars! I mean, that’s my job. My job is to say to people, ‘Go do it. Go! Go West, young man! But let me know where you are, OK? ’Cause I don’t want to have to send a bunch of people out to save you because you didn’t have a canoe to get across the Missouri River.’”

His speaking voice “tends to be several notches louder than the prevailing level of conversation. When he is not speaking, which is not often, his lips flutter and frown, desperate to get back in the game. He starts to answer questions before you can finish asking them.”

As for substance, Kasich says the old, George W. Bush-style conservatism “‘would have been going into a prison and talking to inmates or praying with them or whatever. A ‘woe is us’ kind of thing. But in Ohio, we’re innovating our prison system…I believe you can solve more problems — probably with less money — if you apply your resources more effectively.’ This is where Kasich differs from Walker & Co. His gospel doesn’t stop with spending cuts. He wants conservatives to finally walk the walk on social welfare, too.”

“‘I just talked to Natan Sharansky the other day,’ the governor continues, in what is shaping up to be one of his trademark rants: emotional, self-important, littered with shameless name-dropping. ‘You know, he was a prisoner of conscience. Wrote one of the greatest books I've ever read: Fear No Evil.’ Kasich stops abruptly and leans his chair toward me as he erupts with both delight and disbelief at his intellectual hobnobbing. ‘I actually do this! I am not making this up! This is actually true!’

“He specifically delights in gigging members of his own side for taking positions he regards as unrealistic, nakedly political, or downright stupid. He does not simply defend the Common Core; he accuses its opponents of ‘hysteria.’ He has asserted that resistance to Medicaid expansion is ‘really either political or ideological’; he maintains that, with immigration reform, no option can be taken off the table, including a path to citizenship; and do not get him started on the nuttiness of the anti-vaccine folks—or the pols too gutless to stand up to them.”

At first glance, it seems like Kasich could have a Mitt Romney problem, a moderate record out of step with the GOP base. But he actually has strong conservative credentials, turned Ohio’s economy around and is pushing for a balanced budget amendment. And as the son of a mailman (as he often notes), Kasich has a blue-collar appeal that other candidates—say, the son and brother of presidents—may lack.

In New Hampshire, Kasich pitched himself as a pragmatist: “Look, you just look at my career. Throughout the whole course of my career. I know how to compromise, I know how to negotiate, but I also know not how to abandon my principles in the middle of it.” And he also said: “I believe it is conservative to help the mentally ill, the drug-addicted, the working poor.”

But Kasich briefly ran for president in 2000 and got nowhere. He’ll have to decide whether he can raise the money, build the organization and find a niche against so many prominent rivals. In the end, Kasich might conclude that it’s easier to garner attention by talking about running for president than by actually doing it.