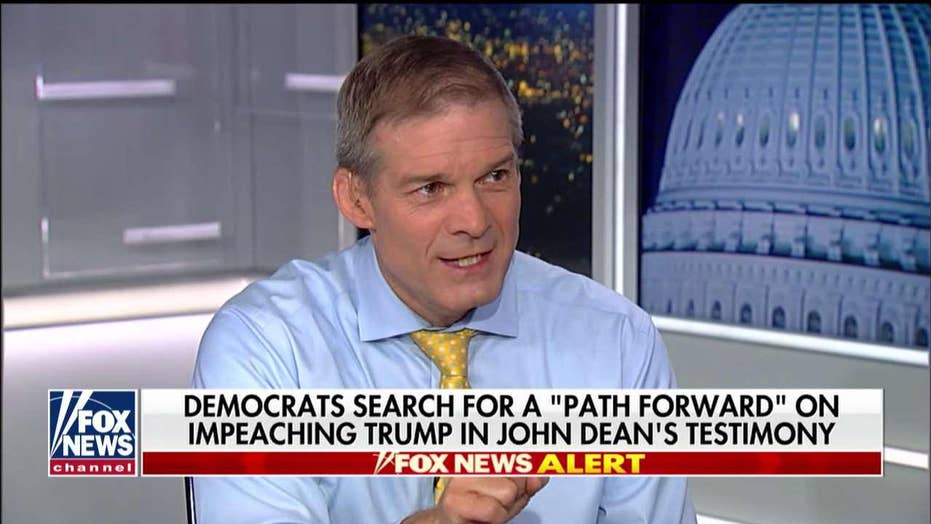 Jim Jordan: Democrats focused on impeachment and 'getting the president,' not helping the country

Rep. Jim Jordan said Tuesday that Democrats are focused on "getting the president" through impeachment, not on helping the country, calling John Dean's upcoming testimony the "opening act."

Rep. Jim Jordan said Tuesday that Democrats are focused on "getting the president" through impeachment, not on helping the country, calling John Dean's upcoming testimony their "opening act."

Democrats on the House Judiciary Committee announced Monday that they would call Dean, the former White House counsel to Richard Nixon and a key figure in the Watergate scandal, to testify June 10 as they seek to keep attention on the Mueller report.

Responding on "Fox News @ Night," Jordan, R-Ohio, said the move appears to be the opening salvo from Democrats toward impeachment proceedings, explaining that various Democratic committee chairmen have "memorandums of understanding" on how they will "coordinate" their efforts against Trump.

Jordan said he still has questions to ask former Special Counsel Robert Mueller, but it's up to Judiciary Commitee Chairman Jerry Nadler on whether Mueller will testify before the committee.

"I think America has one central question for him. When did you learn, when did you know there was actually no collusion? That was the central focus of what your special counsel investigation was supposed to be about," he said, arguing the Mueller investigation spent $30 million in an effort to find obstruction of justice.

He said if Mueller and 19 mostly Democrat lawyers could have established obstruction of justice they would have made that clear in the report, but instead they declined.

"Remember, [FBI staffers] Peter Strzok and Lisa Page were part of his team at the start too. [Mueller] had to kick them off when their bias was discovered. ... The Democrats don't want to leave this alone. They're gonna keep pushing because their focus is on getting the president and not on helping the country," he said.