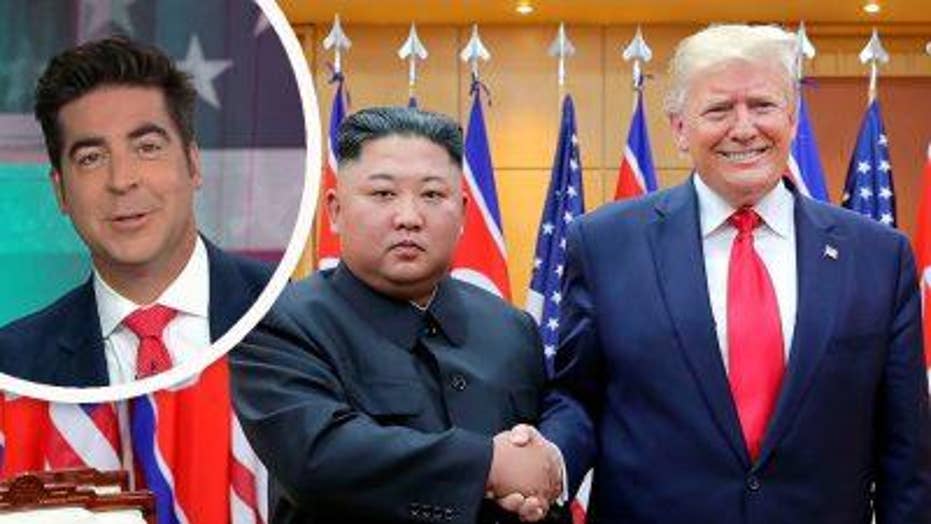 President Trump and North Korean leader Kim Jong Un's meeting at the Demilitarized Zone will be looked back on as a key moment in history, according to Jesse Watters.

The president's continued work to soften relations with Kim is something different and positive, and scholars will take notice, Watters claimed Monday on "The Five."

"Everything that other presidents have done has not worked," he said.

"It has gotten more dangerous in North Korea. This president comes along and tries something different. He's been criticized the entire time.

"I think everybody can agree we are heading in the right direction. There is a thaw and historians will acknowledge this step across the DMZ was a very powerful and important moment."

Watters also dismissed criticisms of Trump from some of 2020 Democratic presidential contenders.

In one clip, Rep. Tim Ryan, D-Ohio, claimed Trump's visit to the border village of Panmunjom was like former British Prime Minister Neville Chamberlain, "going to talk to Hitler."

In response, Watters pointed out South Korean President Moon Jae-in called Trump, "the maker of peace on the Korean peninsula."

"I think everybody needs to be reminded that people in the region appreciate what Donald Trump is doing over there diplomatically."

In stepping over the border, Trump became the first sitting U.S. president to set foot inside North Korea.

"I was proud to step over the line," Trump told Kim later, inside the Freedom House on the South Korea side, according to the Associated Press.

"It is a great day for the world."