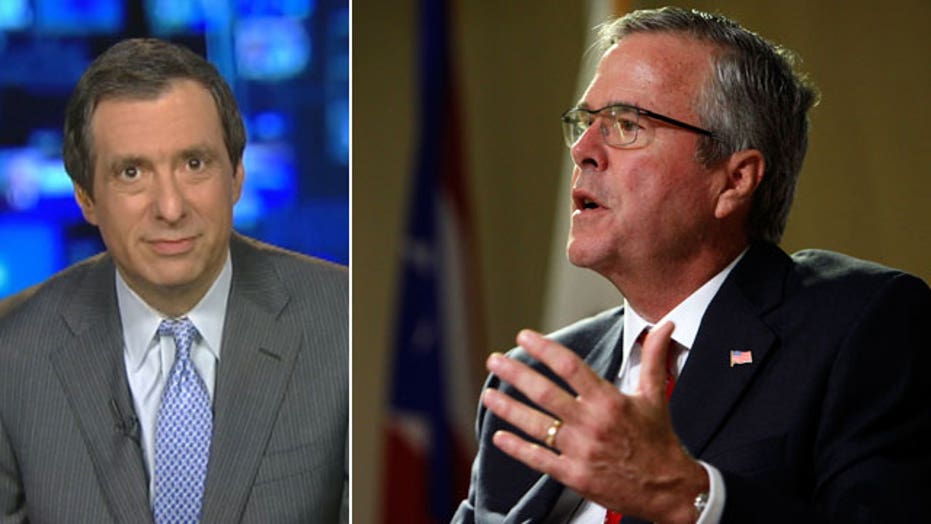 Kurtz: Another Bush in trouble on Iraq

Jeb Bush had some cleanup work to do yesterday.

The former Florida governor showed a keen grasp of policy during a 20-minute interview with Megyn Kelly that aired Monday night, appearing relaxed as he defended positions that don’t sit well with much of the Republican base.

But then there was Iraq.

It’s a politically explosive topic for Jeb for two big reasons. The war became a quagmire, and it's so closely associated with his brother.

Megyn’s question was quite explicit: “Knowing what we know now, would you have authorized the invasion?”

But that’s an answer framed around our state of knowledge 12 years ago, in the face of a massive campaign by his brother’s administration to convince the world that Saddam Hussein had weapons of mass destruction.

So Bush either misheard the question, as he now says, or answered the way he did because it’s easier to frame an explanation that ropes in the prominent Democrats who supported the invasion in that post-9/11 period.

Bush tried to clarify things by calling into Sean Hannity's radio show with this admission: "I interpreted the question wrong, I guess."

So would he have sent troops to Iraq, knowing what we know now?

"I don't know what the decision would have been--that's a hypothetical," said Jeb.

Obviously, Jeb Bush doesn’t want to get painted into a corner where he says he would not have invaded Iraq based on what we know today, that Saddam didn’t have illegal weapons. If he uttered those words, there would be thousands of stories about how he’s renouncing his brother’s legacy, trying to prove his independence, and on and on.

What bothers me, though, is the way the media are clobbering Bush not for the substance of his answer, but on linguistic grounds. What happens next—you know the pattern—is that the noise gets so loud that everyone—left, right and center—has to deal with it. So rather than having a debate about Iraq and foreign policy and where Bush stands today, we’re having a shoutfest about semantics. It's the media as parsing police.

So let’s return to the substance:

When Megyn followed up by asking if the decision was a mistake, Jeb talked about faulty intelligence and the lack of early focus on security in Iraq: “By the way, guess who thinks that those mistakes took place as well? George W. Bush.”

No daylight, nothing to see here.

The first indication that Jeb felt the need to clarify came on CNN’s “New Day,” where conservative commentator Ana Navarro, a surrogate for Bush, said she’d been in touch with him by email. “I said hey, I am a little confused by this answer, so I am wondering did you mishear the question, and he said yes,” Navarro explained. She also opined that “people are salivating to see Jeb throw his brother under the bus.”

A less generous interpretation came from Laura Ingraham, the Fox News contributor, on her radio show: “You can’t still think that going into Iraq, now, as a sane human being, was the right thing to do. If you do, there has to be something wrong with you," she said.

And it leads to mockery, such as this Roger Simon column in Politico on how Jeb is supposed to be the smart one in the family. The headline: “Was Jeb dropped on head as a child?”

It’s safe to say this issue will not quietly fade away. It’s a version of  the larger problem Jeb faces, however unfairly, because of his last name: Is the country ready to hand the White House to a third member of the Bush family in a quarter century? And Iraq becomes a kind of shorthand for that, the most controversial and consequential decision of George W.’s presidency, whose aftershocks are still being felt today.

What was also fascinating, as Jeb defended his stance on a path to legalization for immigrants who broke the law, was this comment: “Do you want people to just bend with the wind, to mirror people's sentiment? Whoever is in front of you? 'Oh, yes, I used to be for that but now I'm for this.' Is that the way we want to elect presidents?”

That’s his way of saying he’s going to run the campaign he wants and he’s not going to unduly pander to the right wing, that voters who don’t agree with him on Common Core or immigration can look elsewhere.

At the same time, Bush doesn’t speak in punchy sound bites, which could hurt him, and he tends toward the low key, which can translate as a lack of passion.

Jeb, who hasn’t officially declared, had not given an interview in two months until he sat down with Megyn Kelly. If he does a few more, does that put pressure on the woman who also carries some baggage because of her last name?