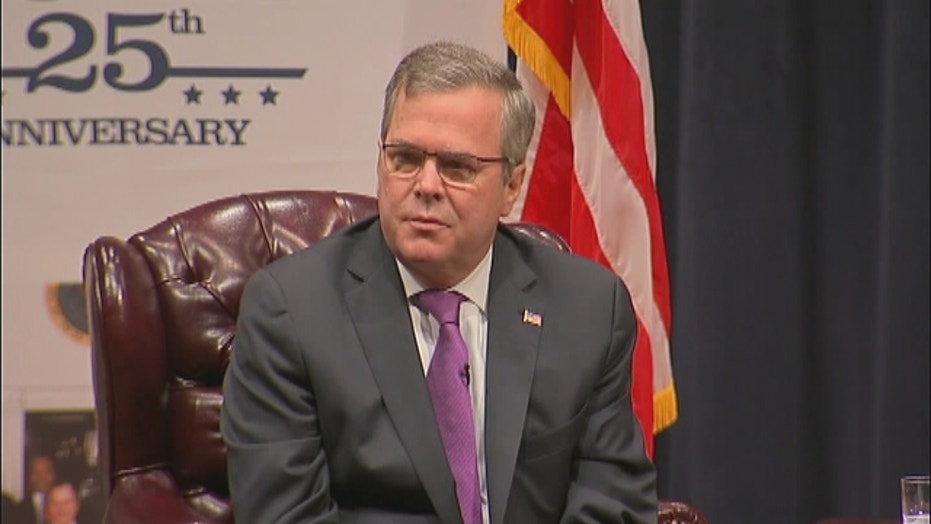 Jeb Bush says all the speculation about whether he'll run for president in 2016 is actually getting him more attention than if he had already entered the race.

The former Republican governor of Florida said that's not by design, and that he'll make his decision before year's end.

He told Fox News Channel in a sit-down interview in front of an audience that aired on Sunday that the state of politics is "crazy right now."

Bush has antagonized many Republicans by supporting an immigration overhaul and educational standards for kindergarten through 12th grade known as Common Core.

On immigration, he said that those who come into the country illegally generally do so because they had no other means to provide for their family, and what they did is "not a felony."

"It's an act of love. It's an act of commitment to your family," Bush said. "I honestly think that that is a different kind of crime. There should be a price paid, but it shouldn't rile people up that people are actually coming to this country to provide for their families."

The interview with Bush occurred at his father's presidential library during the celebration of the 25th anniversary of George. H. W. Bush's presidency.

"We need to elect candidates that have a vision that is bigger and broader," Bush told Fox News' Shannon Bream, "and candidates that are organized around winning the election, not making a point."

He added, "Campaigns ought to be about listening and learning and getting better ... I'm not being critical of my party, but campaigns themselves are reflective of this new America."

Jeb Bush has not taken any public steps toward building a campaign or an organization, but as the son and brother of former presidents he has a built-in legitimacy and name recognition that any candidate would kill for.

Andrew H. Card Jr., who worked in both previous Bush administrations, told The New York Times, "If Jeb Bush doesn't run for president, shame on us. He is demonstrating the kind of leadership we desperately need both in our party and in our nation."

Not everybody, including conservative Tea Party voters, may agree.

If he does run, Jeb Bush may not even have his mom's vote. Last year, Barbara Bush told NBC News that "we've had enough Bushes" in the White House.