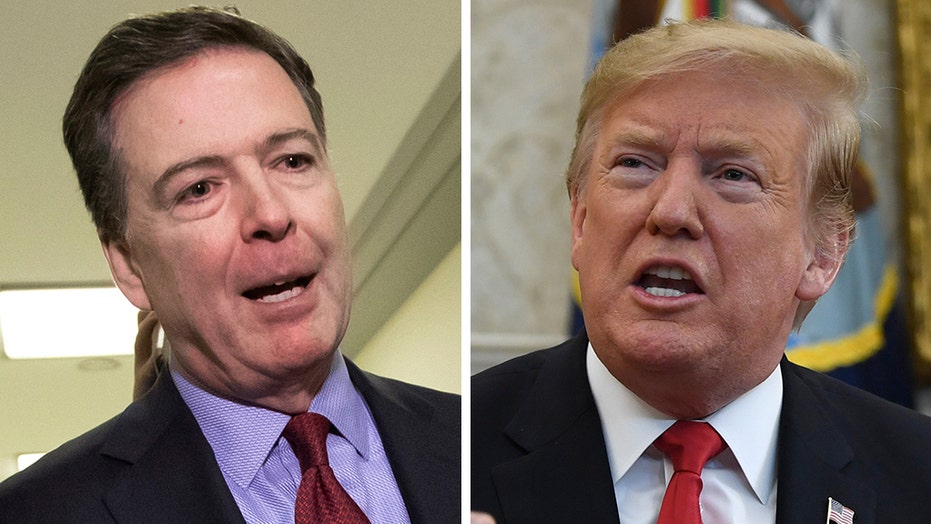 Former FBI Director James Comey wrote a scathing op-ed in the New York Times about President Trump and his influence over those in his administration, particularly Attorney General William Barr amid his Capitol Hill hearings following his summary of special counsel Robert Mueller's investigation.

Comey opined that many have wondered how a lawyer as "bright and accomplished" as Barr could be motivated to defend the president in ways that some would deem illegal, or how deputy attorney general Rod Rosenstein could resign from his post while graciously thanking Trump after the president "relentlessly attacked him."

"What happened to these people?" Comey wrote in the piece, which was titled 'How Trump Co-Opts Leaders Like Bill Barr.' Admittedly, Comey said, there is likely no simple answer. Given his history with the president, however, Comey offered up what he believes to be some insight on how Trump interacts with those in his White House.

"Amoral leaders have a way of revealing the character of those around them," Comey wrote, highlighting the resignation of former secretary of defense James Mattis on the basis of principle. "But more often, proximity to an amoral leader reveals something depressing. I think that’s at least part of what we’ve seen with Bill Barr and Rod Rosenstein," he continued.

"Accomplished people lacking inner strength can’t resist the compromises necessary to survive Mr. Trump and that adds up to something they will never recover from. It takes character like Mr. Mattis’s to avoid the damage, because Mr. Trump eats your soul in small bites."

Comey went on to discuss how he, and others, felt "complicit" in Trump's "public and private lies" by remaining silent at his side. He added that frequent conversation among administration members is praising President Trump and discussing what an honor it is to work alongside him.

Ultimately, Comey argues, it creates somewhat of a Catch-22: those in the Trump administration cope with his "outrageous conduct" because feel like they need to stay affiliated with the president in order to protect the American people and democracy.

Comey wrapped up the piece by calling the president a "deeply unethical person," before adding he believes it becomes a "personal sacrifice" for the good the of the country to continue serving for and under Trump.

"You are smarter than Donald Trump, and you are playing a long game for your country, so you can pull it off where lesser leaders have failed and gotten fired by tweet," he said.

"Of course, to stay, you must be seen as on his team, so you make further compromises. You use his language, praise his leadership, tout his commitment to values. And then you are lost. He has eaten your soul," Comey concluded.

The piece is just the latest in a line of criticisms the former FBI director has fired at Trump since losing his job.

In March, he said he believed the president may have committed obstruction of justice by firing him.