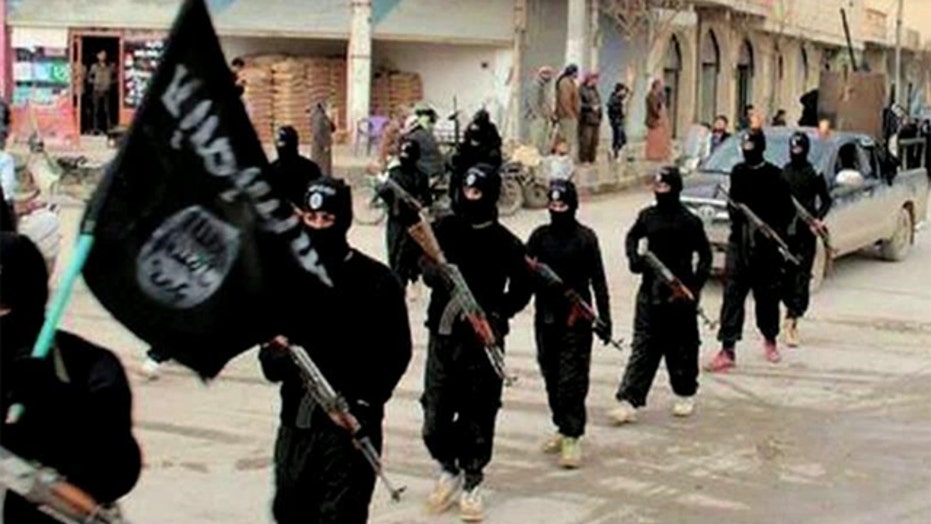 As the Islamic State seeks to export its brand of barbaric terror to would-be affiliates, the U.S. faces a growing challenge to find the sources of ISIS funding and blunt its flow to allied militants.

The terror army's most recent atrocity was the mass beheading of 21 Coptic Christians in Libya. It remains unclear how closely tied those militants are to ISIS in Iraq and Syria, but the Islamic State's underground economy continues to thrive. Even as the U.S.-led coalition strikes at what was long the heart of ISIS' revenue stream -- oil fields and refineries -- officials say the terror network is making money in other ways.

"We know that oil revenue is no longer the lead source of their income in dollars," Pentagon press secretary Rear Adm. John Kirby said recently.

But he added: "They get a lot of donations. They also have a significant black market program." How much money ISIS truly makes from donations is a matter of debate. But experts agree that ISIS receives significant revenue from black-market smuggling and other operations.

"ISIS is selling anything they can get their hands on," Dr. Daveed Gartenstein-Ross, a senior fellow at the Foundation for Defense of Democracies, said in an interview with Fox News. Plus, according to reports, the group is even skimming Iraqi taxpayer dollars by shaking down government employees in areas they've conquered.

In short, ISIS is set on building a terror empire, going so far as to tout its annual financials.

Reportedly, ISIS released a $2 billion budget for 2015 including a $250 million surplus, though those numbers are disputed. After Mosul fell to the Islamic State in June, the International Business Times declared ISIS the "world's richest terrorist organization" after the central bank's vaults were looted of some $420 million. Estimates vary, but ISIS reportedly rakes in between one and three million dollars per day, though the strikes against its oil refineries have taken a toll.

The United Nations last Thursday tried to strike at the money stream. The Security Council unanimously adopted a resolution aimed at cutting off millions of dollars in earnings from oil smuggling, antiquities trafficking and ransom payments to ISIS.

The measure calls for sanctions against individuals and entities that trade in oil with ISIS and Al Qaeda affiliates such as the Al-Nusra Front in Syria. The resolution was co-sponsored by more than 35 countries. It called for all 193 countries of the U.N. to take steps to prevent ancient artifacts from being smuggled and sold and to ban the direct or indirect sale of ransoms.

U.S. Ambassador to the United Nations Samantha Power said payments and donations to ISIS "perpetuate a cycle of horrific brutality, giving these groups resources to carry out more murderous acts and incentivizing them to take more people captive."

How much ISIS really receives from donations is unclear.

"Most charities [supporting radical Islam] in the Gulf are aligned with Al Qaeda, not ISIS," said Gartenstein-Ross.

Gartenstein-Ross pointed to Abdulrahman al-Nuaymi, a Qatari who has been accused by the U.S. Treasury Department of transferring millions of dollars to Al Qaeda affiliates in Iraq and Syria, as a prime example of this arrangement. While many blame Qatar for playing a "double game" of supporting both radical Islamist groups and the coalition against ISIS, the Obama administration disputes the notion that wealthy Arabs from Persian Gulf countries give generously to ISIS.

"ISIL derives a relatively small share of its funds from deep-pocket donors, and thus does not, today, depend principally on moving money across international borders. Instead, ISIL obtains the vast majority of its revenues through local criminal and terrorist activities," said Under Secretary for Terrorism and Financial Intelligence David S. Cohen in October, at The Carnegie Endowment for International Peace.

"There is a lot of opacity," Gartenstein-Ross admitted. But he said the smuggling of black market goods, similar to the opium trade by the Taliban inside Afghanistan; taxation among the Iraqi population particularly in Mosul; and the sale of oil round out other areas of ISIS funding. Gartenstein-Ross pointed out that airstrikes from the U.S.-led coalition against oil refineries in Syria have denied ISIS a large source of revenue. Looting and ransoms make up for some of the difference, however.

Some experts point to the Iraqi government as unwittingly contributing to ISIS' coffers. Aki Peritz, a former CIA counterterrorism analyst, said in a recent New York Times op-ed that the Iraqi government continues to pay its civil servants in Mosul, despite being controlled by ISIS.

Peritz wrote, "Baghdad provides about $130 million every month to pay all its workers in Mosul" and estimated that Iraq's treasury has paid over $1 billion to these civil servants since Mosul fell in June 2014. He estimated that ISIS has taken half of those payments in the form of taxation.

While efforts are currently underway to dismantle key revenue sources for the Islamic State, there are signs the caliphate is receiving setbacks from within. According to syriadirect.org, "Assassinations, bombings and defections plague the Islamic State in Deir e-Zor," in oil-rich eastern Syria. The nonprofit news outlet based in Amman, Jordan, says that over the past month, assassination attempts against members of ISIS religious police have become more common.