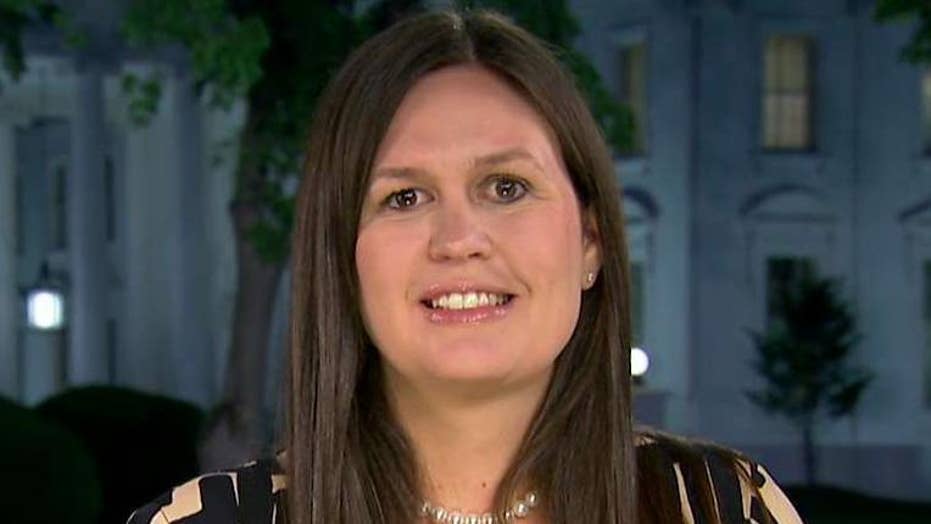 Deputy White House Press Secretary Sarah Huckabee Sanders says James Comey could not effectively carry out the duties of his office, had lost the confidence of his rank-and-file and needed to be fired

Sarah Huckabee Sanders picked one heck of a week to fill in for Press Secretary Sean Spicer at the White House podium -- but it could be part of a trial by fire.

Speculation is mounting that the deputy press secretary is being eyed for a bigger role, amid a tumultuous week where she became the face of the administration's response to President Trump's decision to fire FBI boss James Comey.

Sanders took plenty of hits from the press, especially when the president seemed Thursday to contradict the original White House narrative that he was merely acting on the recommendation of a top Justice official.

But she rarely wavered, and the president apparently is watching closely.

“We’re all under the impression that [Sanders] is auditioning for a greater role in the Trump administration and don’t rule out Spicer’s job,” a White House aide told Fox News, backing up a report in Politico that Trump is eyeing Sanders as a possible replacement for Spicer.

Spicer, up until Friday, has been absent from the briefing room for the past week while on Naval Reserve duty. Sanders was thrown into the proverbial fire when Trump abruptly fired Comey, a decision that left staff scrambling. Despite Spicer's absence, a Washington Post report said Trump faulted Spicer and his team for a shaky response to a decision for which they apparently had little notice.

But since the communications team has launched a full-throated defense of the firing, the daughter of former Republican presidential candidate Mike Huckabee and veteran campaign operative is said to have impressed Trump.

The situation for Spicer was not improved by the release of a trailer for the upcoming "Saturday Night Live," with Melissa McCarthy reprising her brutal impression of the White House spokesman.

For his part, Spicer has brushed off the speculation over his own job security.

And other White House sources have pushed back on the idea of Sanders being in an audition of sorts. One called it "totally ridiculous." Another stressed that Spicer was merely out because of "pre-planned" Reserve duty, "nothing surprising."

Spicer was indeed back at the podium on Friday.

Sanders, in her role as deputy press secretary, also is no stranger to the press corps and has engaged daily with media since the start of the administration. But her official on-camera briefing debut came last Friday when the passage of the health care bill in the House and executive actions related to religious freedom were the primary stories.

Sanders then displayed a lighter touch in pushing back at the media firestorm over Comey.

“Not to sound like a broken record, but since you guys keep asking the same questions, I guess it's only fair that I keep giving the same answers,” she said in response to a question about Trump’s changing opinions about Comey.

“She was the consummate professional. She answered questions directly and came to the briefing extraordinarily well-prepared,” said Bob Wickers, a Republican media strategist who first met Sanders when she interned for him.

“She and Spicer have different approaches and I think you could argue that both are effective -- Spicer gets the numbers, there is no denying that,” said Sarah Lenti, a Republican political consultant. “Whether you like President Trump and his policies or not, I think both Spicer and Sanders are succeeding in their roles.”

Even critics complimented her approach, albeit back-handedly.

“Sarah Sanders parries, spins and obfuscates, too. But she's not condescending and seems comfortable at the podium doing it,” tweeted Josh Dawsey of Politico.

"One Trump supporter emails that the ‘temperature’ in the briefing room has come down dramatically," Maggie Haberman of The New York Times tweeted on Wednesday.

Yet, as the Comey story developed and the president gave interviews that appeared to contradict statements from the press office, Sanders found herself in the same firing line as Spicer.

“Overall she has done as well as can be expected of anybody in that position, but a spokesman is only as good as their relationship with their boss and the information they are given,” said Alex Conant, a partner at Firehouse Strategies and former communications director to Florida Sen. Marco Rubio.

“I certainly don’t envy whoever is in that role,” Conant said, who contends that Trump is not serving his staff well by providing staff with inaccurate information.

Even on the conservative wing, the credibility of the White House was in doubt.

“This kind of despicable lying is just an example of the collapse of all standards, and Sarah Huckabee Sanders should hang her head in shame,” asserted New York Post columnist John Podhoretz on Twitter.

In a Friday morning series of tweets, President Trump all but conceded the White House had been inaccurate in its statements.

“As a very active President with lots of things happening, it is not possible for my surrogates to stand at podium with perfect accuracy!....” he said, suggesting briefings should just be canceled.