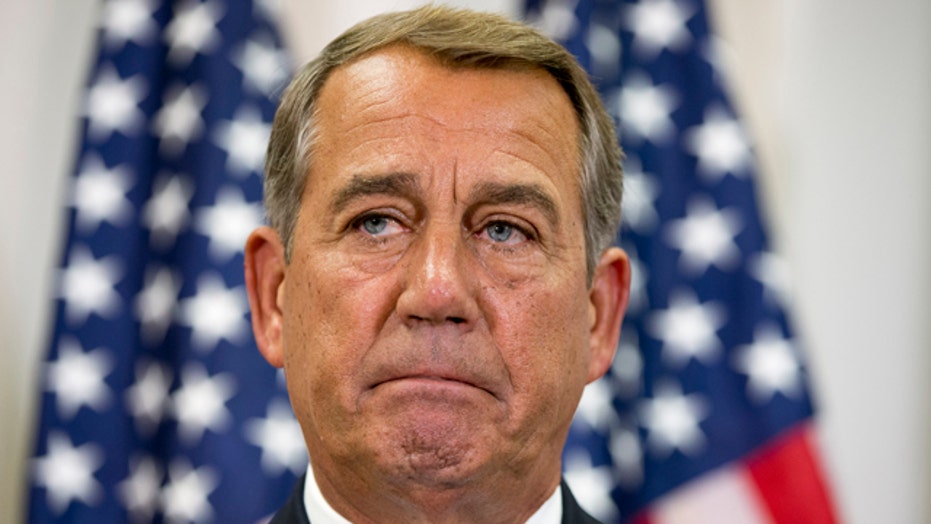 Basil Smikle Jr. and Liz Peek on the potential conservative rebellion in Congress

“Our fight to stop this bad deal, frankly, is just beginning,” House Speaker John Boehner, R-Ohio, warned Thursday. “This debate is far from over.”

On Thursday afternoon, the Senate failed to muster a super-majority to overcome a Democratic filibuster on a bill to reject the Iran agreement.

Thus, the Senate never conducted an up-or-down vote on the measure due to the Democrats’ hindrance.

After all, only four Senate Democrats opposed the accord. The rest supported it. Yet Senate Majority Leader Mitch McConnell, R-Ky., teed-up a re-vote of the same procedural transaction this coming Tuesday night.

“It looks to me like they’re pretty dug in,” McConnell said on Fox News. “They will have to vote on it at least one (more) time.”

Republicans and other opponents of the Iran pact failed legislatively to derail the accord from going through. They could have approved it, voted to reject it, and, if Obama vetoed their rebuke, tried to override it.

If you’re looking to understand the new, convoluted strategy deployed by Republicans on the Iran agreement, look no further than how the GOP perspired and contorted since 2009 to halt ObamaCare.

Perhaps this is why after the Senate vote, Obama accepted the win and went home.

“This vote is a victory for diplomacy, for American national security, and for the safety and security of the world,” he declared shortly after the Senate procedural vote imploded.

Staring defeat in the face, a number of conservatives concocted the idea of suing the president to stop the Iran deal.

“That is an option that is very possible,” said Boehner when asked about legal action.

Republicans believe they spy some shades of daylight in the courts.

Late Wednesday afternoon, rank-and-file House Republicans huddled in the basement of the Capitol to formally scrap one legislative approach on the Iran deal, which the GOP leadership championed in late July and as recently as Wednesday morning.

In the meeting came word that a federal judge agreed to allow some parts of a lawsuit -- approved by the House to challenge ObamaCare -- to proceed. Last summer, the House voted to sue the Obama administration to block subsidies for low-income persons who receive health coverage. The House argued that the administration violates the Constitution by forking out financial assistance to the poor and that Congress -- the ultimate arbiter of federal spending -- never approved that money.

A cheer erupted in the closed-door confab at the news.

Never mind that the Supreme Court rebuffed constitutional challenges to the Affordable Care Act in 2012 and this past July. And don’t forget about the unsuccessful, 60-plus efforts since 2011 to repeal the health care law.

House Republicans are clinging to the slimmest of legal and legislative reeds to still fight the Iran package. It’s likely this will consume a significant lode of political oxygen in the coming months and maybe years.

“The Senate has spoken and has spoken with a clarion voice,” said Senate Minority Leader Harry Reid. “The matter is over with. We should move on.”

But after McConnell announced another vote on Tuesday, the Nevada Democrat sensed that the Iran measure sure felt a lot like the familiar melee that has consumed Congress for years.

“Are we going to be like the Affordable Care Act and try to re-litigate it 60 times?” Reid asked.

But McConnell is promising more than just Tuesday’s mulligan vote.

“The American people will give us their judgment about the appropriateness of this measure a year from November,” he said.

In late July, the House and Senate committed to the only strategy they saw to possibly halt the Iran agreement. Republican leaders certainly didn’t want to approve the Iran pact. But they knew they had the votes to reject the deal

So they engineered a strategy in which case both chambers would vote to turn back the agreement. That would provoke Obama to veto the bill and send it back to Capitol Hill for an attempted veto override. During his presidency, Obama has vetoed four bills sent to him by Congress. Three veto-override attempts failed. The fourth never made it to an override vote.

But this was the only shot Republicans had. It takes a two-thirds vote to override a veto. To be successful, Republicans thought they had an outside shot of revving up enough Democrats to join all Republicans to override the president’s veto.

By early September, it was clear Democrats held the upper-hand.

Sen. Barbara Mikulski, D-Md., became the 34th Senate Democrat to publicly support the Iran accord. That meant Republicans couldn’t cobble together 67 votes to override the veto. If the Senate couldn’t orchestrate a successful override, any effort to do so in the House would be moot.

But that reality didn’t seem to faze House GOP leaders.

On Tuesday evening, the Republican brass dispatched House Foreign Affairs Committee Chairman Ed Royce, R-Calif., to appear before the chamber’s Rules committee. The panel serves as the gateway to the House floor for most legislation.

Royce and others answered questions about a bill to disapprove of the Iran deal for the better part of three hours -- all under the premise that Congress was “on the clock.”

The House and Senate asserted that each in mid-July each had received the appropriate paperwork from the administration on the deal and had until September 17 (60 days) to either accept or reject the measure.

The House, after returning this week from summer break, launched three days of robust debate to disapprove of the Iran deal, starting Wednesday with a final vote on Friday, Sept. 11.

There was trouble by Wednesday morning. Conservative members balked at the leadership gambit. This appeared to catch multiple senior Republicans off guard. But just minutes before the House was scheduled to start a procedural debate on the bill of disapproval, Republicans scrapped that plan. They worried about having the necessary votes and further rankling an already-antagonistic batch of conservatives.

The House Republican leadership did a 180. Now they wouldn’t vote to reject the deal. They would vote to “approve” the deal. That would obviously fail. This strategy meant that there was no way Congress would ever ship a piece of paper to Obama to veto. In other words, if Congress votes down the very bill it intends to pass, then it has nothing to send to the White House for a veto.

But that vote was never really about approving the Iran deal.

Consider this for a moment: Some Republicans were all up in the grill of the leadership over making them take a vote to disapprove of the Iran deal on the anniversary of the Sept. 11. terror attacks.

But essentially no Republicans raised any issues with taking a vote to approve the Iran deal on 9/11 -- which was destined for failure. After all, Republicans would be forcing Democrats who came out in favor of the Iran package to vote in support on Sept. 11.

Republicans would be sure to take notice of the timing of that vote and perhaps even turn that vote around on those Democrats come election time.

Republicans close to electoral efforts in the House said political considerations were never part of the discussion.

But Boehner said the following: “This is about holding every member accountable for their vote. … Holding Members accountable is an important part of our job. And they’re going to have to vote.”

Moreover, Republicans also changed their tune on whether they had the proper documentation on the Iran accord.

For seven weeks, the GOP operated under the premise that it had the papers and the 60-day clock was ticking.

But after the testy Wednesday meeting, House Republicans suddenly contended they lacked the paperwork. In fact, they asserted that suddenly Obama violated the law by not providing Congress with information on so-called “side-deals” negotiated with Iran that no one has ever seen.

So the GOP drafted a non-binding resolution to declare it was the sense of the House that it lacked the appropriate documentation on Iran and that its members think the president broke the law.

Keep in mind that Congress has never gotten around to a floor debate and a vote on any kind of constitutional authority to fight ISIL, or the Islamic State.

Lawmakers waited for months for Obama to send a plan to the Capitol. Few of either party wanted to touch it -- concerned they’d have to commit U.S. troops or make the wrong decision or have blood on their hands.

Earlier this year, Boehner declared that authorization request for a use of force dead and wanted Obama to submit a new one. The administration hasn’t done so.

And so the fight is still on over Iran, though it’s seemingly a fait accompli.

There was a promise by Republicans in 2010 that they would “repeal and replace” ObamaCare. The GOP failed at every turn on that front. It even conducted a procedural vote in late July in the Senate to eliminate the health care law.

There is much criticism in political circles these days of the constant campaign. And that phenomenon is alive and well on Capitol Hill.