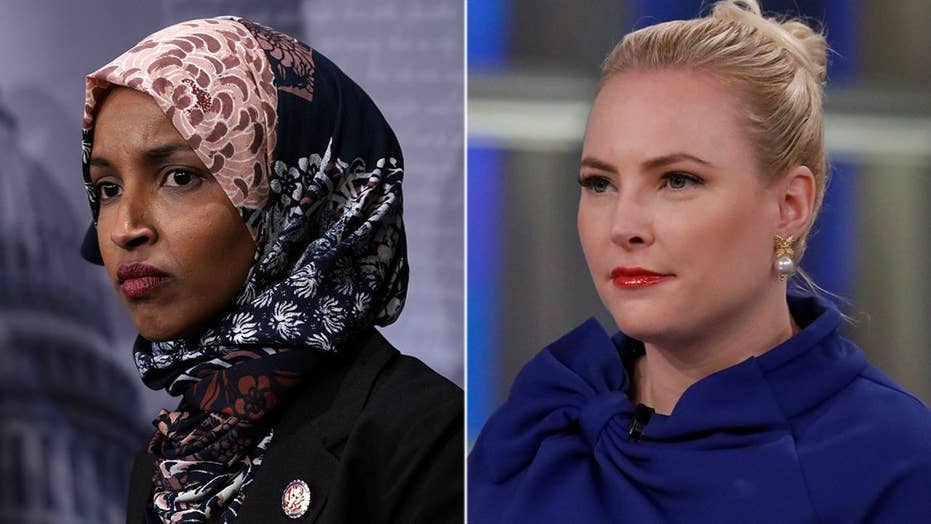 Rep. Ilhan Omar (D-MN) brushes off Meghan McCain on Twitter after McCain criticized some of her recent controversial comments.

Ilhan Omar has made her view on Meghan McCain crystal clear.

Rep. Omar, D-Minn., the controversial freshman congresswoman, mocked McCain’s attempt to call her out during a discussion on anti-Semitism in the wake of the California synagogue shooting.

“When we’re having conversations about anti-Semitism, we should be looking at the most extreme on both sides. I would bring up Congresswoman Ilhan Omar and some of her comments that got so much attention,” “The View” co-host said on ABC’s “This Week with George Stephanopoulos.”

“In my opinion, Nancy Pelosi wasn’t hard enough in response to her trafficking in anti-Semitic language.”

Hours later, in response to a tweet criticizing McCain for referencing Omar and Saturday's deadly shooting at a synagogue in Poway, the Minnesota Democrat weighed in.

The Twitter spat came after police said 19-year-old John Earnest opened fire inside the synagogue near San Diego as worshippers celebrated the last day of Passover, killing one woman and wounding the synagogue's rabbi and two others Saturday, authorities said.

Trump and other elected officials decried what they called an anti-Semitic attack six months to the day after 11 people were killed at a Pittsburgh synagogue in the deadliest assault on Jews in U.S. history.

Trump offered his sympathies Saturday, saying the shooting "looked like a hate crime."

"Our entire nation mourns the loss of life, prays for the wounded and stands in solidarity with the Jewish community," Trump said later at a rally in Wisconsin. "We forcefully condemn the evils of anti-Semitism and hate, which must be defeated."

"No one should have to fear going to their place of worship, and no one should be targeted for practicing the tenets of their faith," he said.