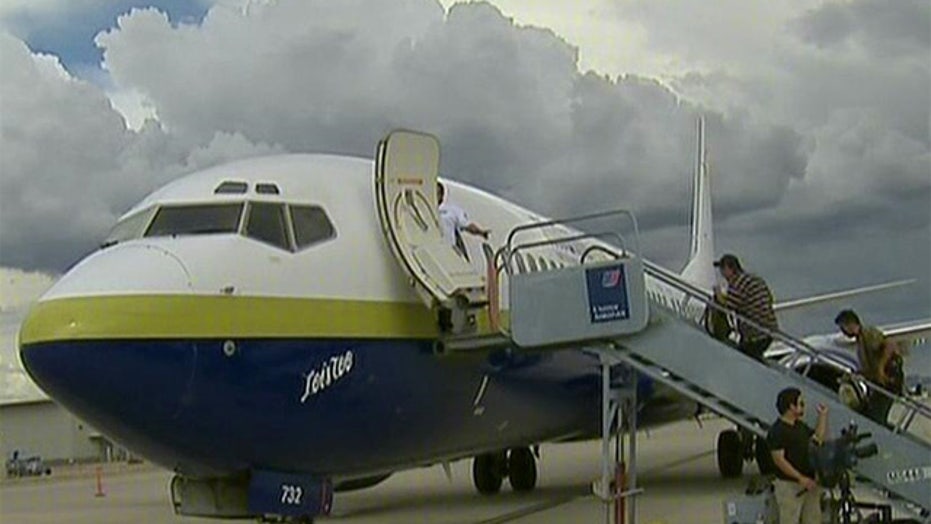 Detained illegal immigrants will not be flown to California

A call for contractors to help Immigration and Customs Enforcement (ICE) deal with tens of thousands of illegal immigrants massing at the Mexican border advises potential vendors they will be expected to report within one business day deaths, escapes, suicide attempts, sexual assaults, contact with smugglers and organized crime syndicates and “media interest.”

The June 17 document replaced an earlier, now-deleted announcement that same day which referred to provision of “escort services for unaccompanied alien children,” changing the easily misconstrued term to “transportation services.” An ICE spokeswoman said the initial post, obtained by FoxNews.com, was accidentally put up before going through the final internal editing process, then taken down while last edits were made.It was reposted five hours later with a new title.

The new request states, “due to exigent circumstances, the Contractor shall be required to transport juveniles via ground to HUB airports or other staging areas that are not located within the area of initial apprehension.”

A similar request for information for “Escort Services” for unaccompanied alien children (UAC) was posted on the same government contracting website in January—which appears to show that federal government was braced for the influx currently overwhelming border states.

In recent months, federal authorities have been trying to cope with a massive influx of illegal immigrants—thousands of mostly women and children from Central America—whom authorities have been scrambling to place in overburdened facilities in Texas and Arizona and elsewhere around the country. Border agencies say they are underfunded and unprepared to handle this humanitarian crisis.

"The flood of children coming to the border without parents is a humanitarian crisis, and the President is also turning it into a national security issue by housing these individuals on our military installations,” Sen. Jim Inhofe, R-Okla., said Friday after touring an Army installation currently housing 600 Central American children

“Since the president created the Deferred Action for Childhood Arrivals (DACA) program in 2012 and instructed DHS to ‘exercise discretion,’ the average number of unaccompanied children arriving at our borders has surged by 100 percent, and we are being warned it is only going to increase,” he said.

Both contract procurement documents detail the “numerous operational challenges” associated with the influx of undocumented children crossing the border.

“The objective of this contract is to provide highly structured, efficient transportation for UAC from their point(s) of entry/staging location in the RGV to ORR shelters, for the purpose of family reunification or long-term care,” the June 17 request states.

“In all cases, the best interest of the child is to be the primary consideration, and children are to be treated with special consideration for their unique needs—to include their safety, security, well-being, and immediate physical health needs.”

The unarmed contractors will transport children via ground, commercial and charter flights.

Contractors will be required to file an Emergency Report within one business day in event of the following:

-- Escapes/attempted escapes not resolved within 24 hours

-- Suspected violation of a restraining order

--Inappropriate conduct or behavior between contract staff and alien

To reach this reporter email jana.winter@foxnews.com