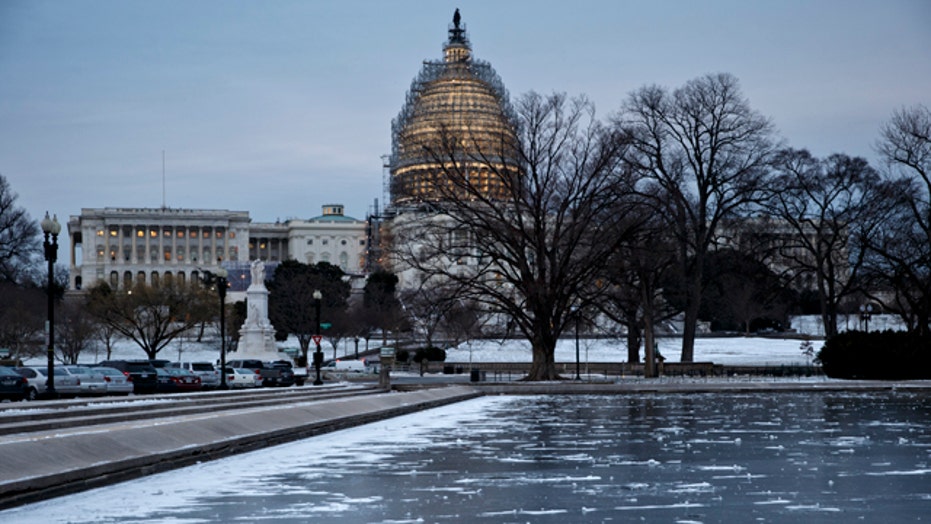 The Republican-controlled House is charging ahead with a bid to block President Obama’s immigration executive actions, as congressional Democrats decry the effort as folly and the White House threatens a veto.

The House began debate Tuesday night on a Department of Homeland Security spending bill which Republicans want to use to defund and undo the president’s immigration plans. They could vote as early as Wednesday.

Republicans said it was their response to a president who had overstepped his bounds.

"We're voting to block the president's overreach, his executive overreach, which I believe is beyond his constitutional duty and frankly violates the Constitution itself," House Speaker John Boehner said Tuesday. "This is not about the issue of immigration. What it is about is the president acting lawlessly."

Following a White House meeting with Obama and other congressional leaders Tuesday morning, Boehner's office reiterated that the House would still push forward on the DHS bill, including amendments to "stop the president's  unilateral actions on immigration." His office said, during the meeting, Boehner "reminded the president that he himself had stated publicly many times in the past that he did not have the power to rewrite immigration law through executive action."

But House Democratic Whip Steny Hoyer, D-Md., who also was in the meeting, called Republicans' approach "indefensible" and "irresponsible."

Democrats, and even some Republicans, warn that the effort to wage the immigration fight during debate over a DHS spending bill risks vital security funding – at a time when the department is ramping up security measures in the wake of the Paris terror attacks. Current DHS funding expires at the end of February.

And Democrats who support the president’s immigration measures are rallying against the Republican push.

Rep. Louise Slaughter, D-N.Y., called it an effort to “poke the president with a stick.” She predicted the bill would pass both chambers, but be vetoed in the end, calling it an “exercise in futility.”

Indeed, the White House has warned that Obama would veto the bill.

In a statement on Monday, the White House said the administration “strongly opposes” amendments to the bill that would restrict “the Department's ability to set smart enforcement priorities focused on criminals, national security threats, and recent border crossers, hold undocumented immigrants accountable, and modernize the legal immigration system.”

The president’s actions, announced in November, overhaul enforcement priorities but also allow millions of illegal immigrants – mostly, the parents of citizens and legal residents – to get a deportation reprieve and seek work permits.

Boehner stressed that Republicans' goal is still to fund DHS.

The immigration bill is just the latest legislation that the president has threatened to turn back – including a bill nearing a final Senate vote that would approve the Canada-to-Texas Keystone pipeline; a bill reining in what Republicans call excessive regulations; and a bill specifically weakening financial regulations.

Meanwhile, on the Senate side, Sen. Jeff Sessions, R-Ala., this week urged his party to redouble its efforts against the president’s “amnesty” measures. In a memo to fellow Republicans, he said, “Congress has the power to stop this action by denying funds for its implementation.”

Sessions, one of the most outspoken opponents of the administration’s immigration approach, lamented that an accompanying public campaign has not materialized, and urged the party to unify around the effort.

“Unified completely behind the task of using the DHS bill to block funds for this illegal scheme, all of our strength could then be squarely focused on rallying the public to action,” he wrote.