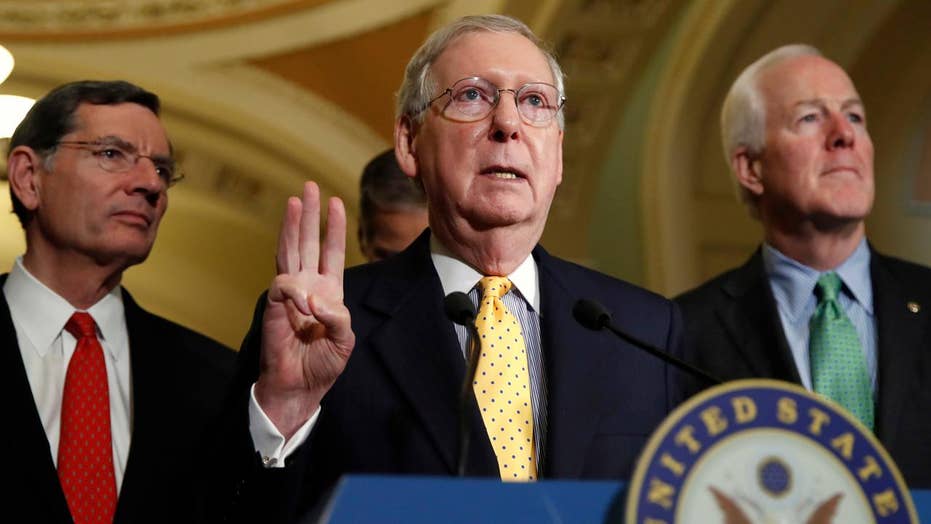 A congressional audit released Wednesday found the House’s recently passed ObamaCare overhaul bill will lower the average cost of premiums but that 23 million fewer Americans would be insured under the plan by 2026.

The much-anticipated nonpartisan Congressional Budget Office report also found the bill will reduce the deficit by $119 billion over a decade, primarily because of its cuts to Medicaid and private insurance subsidies.

The GOP-controlled Senate will now craft its own bill to overhaul ObamaCare -- the 2010 law formally known as the Affordable Care Act.

The Republican-controlled House in early May narrowly passed its version, the American Health Care Act.

The CBO report ends concerns among Republican congressional leaders about the House having to re-vote on its bill because it failed to reduce the federal deficit by $2 billion, which allows the Senate to pass a version by a simple, 51-vote majority. The Senate has 52 Republicans and 48 Democrats.

“We are on a rescue mission to bring down the cost of coverage and make sure families have access to affordable care,” House Speaker Paul Ryan, R-Wis., said Wednesday. “This CBO report again confirms that the American Health Care Act achieves our mission: lowering premiums and lowering the deficit. It is another positive step toward keeping our promise to repeal and replace ObamaCare.”

However, the report undermines claims by House Republicans that their bill protects people with pre-existing conditions.

The budget office concluded that people with pre-existing conditions, in some cases, couldn’t buy comprehensive health insurance at premiums comparable to those under ObamaCare, "if they could purchase it at all."

House GOP leaders got their bill over the finish line May 4 by arguing that a last-minute addition of $8 billion would bolster protections for those with pre-existing conditions.

The CBO specifies that these people would have difficulty getting affordable coverage "despite the additional funding that would be available."

Virginia GOP Rep. Morgan Griffith, a member of the conservative House Freedom Caucus, downplayed the CBO findings, arguing some of the office's forecasting on ObamaCare was off.

“The future is hard to predict,” he said. “The CBO has historically been off on a number of items.”

Democrats were quick to again criticize the House bill, following the release of the CBO report.

“House Republicans threw themselves a party for passing this bill, and now we know exactly what they were celebrating: 23 million Americans potentially losing their care,” said Tom Perez, chairman of the Democratic National Committee.

Utah GOP Sen. Mike Lee told Fox News before the release of the CBO report that Senate Republicans plan to redo the House version, while also adhering to the $2 billion cutoff.

“We all understand that the House bill has to be essentially rewritten,” said Lee, part of the Senate's ObamaCare working group that meets twice weekly.

President Trump, who campaigned on repealing and replacing ObamaCare, supports the House bill.

House GOP leaders have passed dozens of repeal and partial-repeal bills but not before Trump, a fellow Republican, took office.

Democrats largely support former President Barack Obama’s signature health care law and are already using Republicans’ overall efforts against them in next year’s elections, saying millions of Americans as a result will lose their medical insurance.

Fox News’ Joseph Weber and Chad Pergram and The Associated Press contributed to this report.