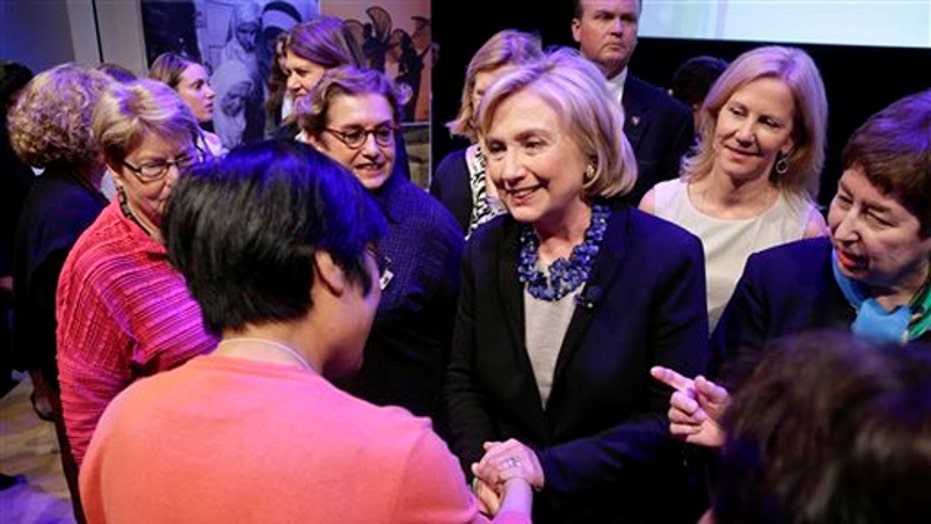 By going to Iowa for Tom Harkin’s 39th and final steak fry, Hillary Clinton knew that a planeload of pundits would head to the Hawkeye State and cover the event as the kickoff of her presidential campaign. So much for laying low.

From her perspective, she needed to show Iowa a little love after avoiding the state for seven years—ever since she finished third in the Iowa caucuses and her “inevitable” campaign began to sink. So using the Harkin farewell as a reason to show up with her husband, and teasing the crowd about 2016, seemed like a good way to parachute in.

A bit too high-profile for someone who still claims to be making up her mind? Could she have gone to some small-town venue instead? I don’t think Hillary can do off-Broadway, given that the Democratic nomination is hers for the taking. Those same 200 reporters who were herded behind a barrier, waiting for her to grill some steak, would treat any Clinton appearance as red meat.

Thus comes the cascade of questions: Will caucus-goers embrace her? Did Bill overshadow her? Is she insufficiently liberal for the party? Is she distancing from Obama? Why didn’t she answer that activist’s question on immigration? Is she too cautious? Too coy? Did she say enough? Did she say too much? Is there Hillary Fatigue?

Never mind that Hillary was seemingly quite relaxed as she toyed with the crowd about how she’s thinking about grandmotherhood…and that other thing. There’s one question almost all sentient political journalists have stopped asking: Is she running? You don’t go to Iowa and announce “I’m baack!” if you’re not running.

(What’s more, the New York Times has discovered that she’s working out and doing yoga--so that settles it!)

But she’s in this weird limbo right now. Hillary feels the need to stay in the news, even after one of the longest book tours in recorded history. But she doesn’t feel compelled to comment on every passing public issue or media contretemps—because, you see, she’s not officially a candidate. She straddles a kind of middle ground while an obsessive press corps asks, what is her campaign really about?

Of course Hillary should have to run a tough gauntlet, like every White House aspirant. She has to fill in the blanks on immigration and ISIS, on banking regulation and Benghazi. But since she faces the prospect of a two-year campaign slog, she is trying to dip her toe in and out for now. And the media aren’t going to stand for that.

Just look at all the angles that various outlets devised from a single Iowa drop by.

The New York Times makes it about the former president:

“As is often the case wherever Mr. Clinton goes, what amounted to the unofficial start of the next Iowa presidential caucuses was as much about the Clinton who already served as president as the one who appears to have designs on the office…

“After indulging a few questions, Mrs. Clinton drifted away, and the grill-side session soon became the Tom and Bill Show. Mostly it was the latter.

“It was a vintage bit of Clinton garrulousness, and the former president had little appetite to cut it short, despite the increasingly urgent pleas from aides behind him and Mr. Harkin.”

“Members of the political press corps may be obsessed with a Clinton 2016 presidential campaign. They parse every word, looking for signs of this or that, and interpret every move as meaning something. Along with Democratic insiders, they speculate about every aspect of a possible campaign.

“Clinton has fed this media pack plenty of morsels over the past few months, with stumbles on her book tour about her wealth and a testy exchange with National Public Radio’s Terry Gross about her evolution on same-sex marriage. She did recent a backflip after a tart comment in an interview with the Atlantic’s Jeffery Goldberg about President Obama’s foreign policy seeming to lack an organizing principle.

“The constant and sometimes microscopic coverage — and cable commentary — drives Clinton’s advisers wild. For months they have attempted to claim that she is simply a private citizen, or merely an author on a book tour, as though she, her husband and those around them aren’t weighing what a 2016 campaign would look like and how it could and should be different from her unsuccessful effort in 2008.”

Good luck with that claim.

The Wall Street Journal touches on the question of ideology:

“Her appearance also fanned a debate among Democrats in Iowa over whether they should use their first-in-the-nation nominating contest—and the rapt attention that draws from candidates—to hash out differences on major issues, or unite behind Mrs. Clinton to give her a running start against Republicans. Some Iowans said that on several issues, they want to push party policy to the left of what they expect to be Mrs. Clinton's stances.”

“Does she really need this? She makes a number of references in her speech to the impending birth of her first grandchild and some believe she will pass up a run for the presidency to be a grandmother.

“I doubt it. This is the woman who said to her supporters in June 2008: ‘Although we weren’t able to shatter that highest, hardest glass ceiling this time, thanks to you, it’s got about 18 million cracks in it.' And it feels like she is quite prepared to multitask: be a grandmother and run the nation, too.

“And there was one very good sign here: Bill is playing along this time. When he got up to speak after Hillary was done, he was very careful not to overshadow her.” Got that, New York Times?

The New Republic examines Hillary and the base:

“The real question is whether she wins the easy way or the hard way. Does her candidacy alienate activists and dampen Democratic enthusiasm, culminating in a humiliating stumble at some point in the primary process? Or does it rally the party around her and generate momentum heading into the general election?...

“The [New York] Times’ steak-fry table-setter noted that ‘she has talked to friends and donors in business about how to tackle income inequality without alienating businesses or castigating the wealthy.’ Is there a more reliable way to rile up liberals than to conspicuously tiptoe around the powers that be? On foreign policy, it’s one thing to back air strikes in Iraq and Syria, something the American public overwhelmingly supports, and which Clinton’s allies suggest she would have been quick to resort to. But it’s another thing to broadly criticize the incumbent Democratic president as insufficiently interventionist, which suggests a level of hostility to the party’s base.”

Meanwhile, Tom Harkin’s opinion hasn’t been sought out this much since the Iowa senator briefly ran for president in 1992 (and his presence kept Bill Clinton out of the Iowa caucuses). The Weekly Standard points to ABC’s Jonathan Karl interviewing Harkin on his view of Hillary:

“‘We're always nervous about people moving too far to the right,’ said Harkin, who Hillary is visiting with in Iowa this weekend. ‘See, a lot of us believe the center ought to be moved back--that the center has moved too far right.’

“Asked Karl, ‘So where's Hillary on that?’ ‘Well, I don't know,’ responded Harkin. ‘I think this is something that will be developed and we'll find out when -- if when and if she decides to run, you know, what's her vision for America?’”

And the sleeper issue here, sniffed out by National Review’s Jim Geraghty:

“How perfectly Clintonian: ‘While a crowd of several thousand Democrats waited on a sloping, grassy field below, Mrs Clinton, her husband and Senator Harkin staged a mini-grilling of steaks for the press at a single barbecue grill in a fenced-off enclosure, framed by a handsome tree and a picnic table filled with some patient Iowans. Mrs Clinton gamely posed, pretending to grill a steak that had been pre-cooked for her.’

“Remember all those relentless media references to George W. Bush’s alleged ‘fake’ ‘plastic’ turkey while visiting the troops in Iraq?”

I can hear the 30-second ads now: Can America really trust Hillary if she can’t cook a decent steak?