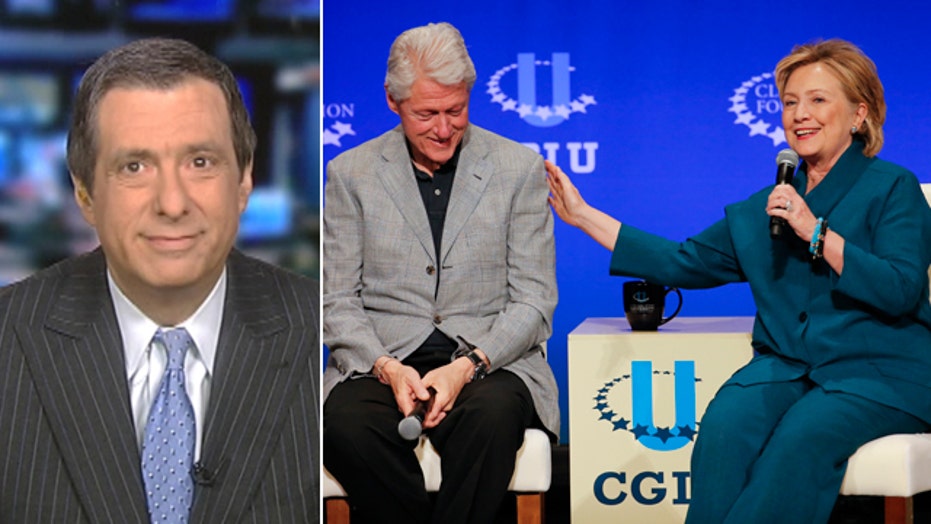 Hillary Clinton is distancing herself from her husband. She’s disavowing his policies. She’s abandoning his legacy!

That, at least, is the theme that several media outlets are pushing.

And it runs the risk of oversimplifying things by reducing the story to one of marital betrayal.

It’s beyond debate that Hillary is moving away from some of the major policies that Bill Clinton pursued in the 1990s. But here’s the catch: So is Bill!

The man was elected in 1992, nearly a quarter century ago. Of course some of his policies are wildly outdated, or have proved unworkable. What would be remarkable is if Hillary were running on a platform designed for the era of “Seinfeld” and “Friends.”

Hillary’s move to the left is more revealing when viewed in the context of what’s happened to the Democratic Party since her husband beat George H.W. Bush. And the simple fact is the party’s center of gravity has moved in a sharply liberal direction, just as the Republicans have become more conservative since Bush’s son was in the White House.

The most obvious example is same-sex marriage. It was Bill Clinton who signed the Defense of Marriage Act in 1996, at a time when the Democrats were widely viewed as too liberal on cultural issues. Hillary has not only embraced gay marriage, she’s suddenly come out for a constitutional amendment to allow such unions, rather than leaving the matter to the states.

But Bill Clinton has also renounced DOMA. And with gay marriage legal in 37 states and public opinion swinging sharply in that direction, Hillary Clinton would be out of step with her own party if she took any other position. What was viable in the mid-’90s simply doesn’t match the cultural reality of 2015.

Criminal justice is another battleground. It was the former president’s policies that led to militarizing local police departments and the incarceration of 2 million people, which even he now says was an overreaction to the crime wave of that time. Hillary is now calling for an end to “the era of incarceration,” which even some conservatives believe has gone too far. But again, no daylight between her and her spouse.

A trickier obstacle course for Hillary is trade. Much of the Democratic Party is opposed to President Obama’s Trans-Pacific Partnership, which is the natural successor to Bill Clinton’s NAFTA agreement. But on this one, Hillary has been cautious, issuing platitudes about the need to protect workers rather than opposing the president she worked for. So she hasn’t broken with him or her free-trade past.

Still, we’re seeing headlines like this one in the Washington Post: “How Hillary Clinton is running against parts of her husband’s legacy”:

“On issues large and small, the Democratic presidential contender is increasingly distancing herself from — or even opposing — key policies pushed by Bill Clinton while he was in the White House, from her recent skepticism on free-trade pacts to her full embrace of gay rights.”

Some pieces, like this one in Politico, drill down on a particular issue:

“Hillary Clinton declared Wednesday in New York that there’s ‘something wrong’ with criminal justice in America.

“But a lot of what Clinton finds wrong can be traced to her husband’s presidency.”

The New York Times avoided making the story too personal:

“If the centrist policies of the Bill Clinton years were known for stepped-up policing and prison building, deficit reduction, deregulation, welfare overhaul and trade deals, Mrs. Clinton is steering her early candidacy in the opposite direction, emphasizing economic populism, poverty alleviation and, in the criminal justice system, rehabilitation over incarceration.”

It’s easy to forget how different Bill Clinton’s era was. Crime was a huge issue. Gay marriage was hard to imagine. Republicans had held the White House for 12 years, crushing Jimmy Carter, Walter Mondale and Michael Dukakis. The former Arkansas governor ran as a Third Way candidate. It’s not an accident that he declared “the era of big government is over.”

Hillary Clinton is running at a time when Democrats are angry about income inequality and feel they’ve prevailed on such culture-war issues as gay marriage. That’s why she’s a very different candidate than her husband, who governed in the last century.