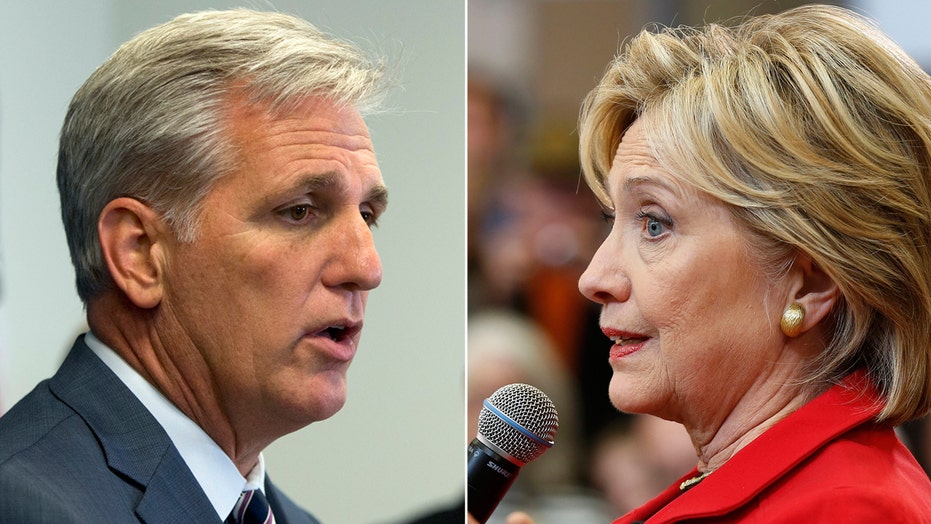 The 30-second commercial, entitled "Admit", is part of a new national cable TV ad buy that starts Tuesday. The ad features McCarthy telling Fox News' Sean Hannity in an interview last week, "Everybody thought Hillary Clinton was unbeatable, right? But we put together a Benghazi special committee, a select committee. What are her [poll] numbers today?"

After McCarthy's remarks, a voiceover narration says, "The Republicans have spent millions attacking Hillary because she’s fighting for everything they oppose ... from affordable health care ... to equal pay, she’ll never stop fighting for you and the Republicans know it."

Emily Schillinger, a spokeswoman for House Speaker John Boehner said in response to the ad, "This is a classic Clinton attempt to distract from her record of putting classified information at risk and jeopardizing our national security, all of which the FBI is investigating."

McCarthy, who has put himself forward to replace the departing Boehner as Speaker, later backed off his initial remarks, saying he "never meant to imply" the Benghazi committee's investigation was politically motivated.

Earlier Monday, Clinton said that if she were president, she would have done everything in her power to shut down the investigation.

"Look at the situation they chose to exploit, to go after me for political reasons: the death of four Americans in Benghazi," Clinton told NBC's "Today" in an interview before a town hall appearance in New Hampshire. "This committee was set up, as they have admitted, for the purpose of making a partisan, political issue out of the deaths of four Americans."

Clinton has previously stopped short of joining some of her fellow Democrats in calling for the committee to be disbanded. She is scheduled to testify before the committee on Oct. 22. She told NBC she was looking forward to her appearance "to explain everything we've done, everything that I asked to happen."

Clinton's comments came as Democrats on the Benghazi panel released a partial transcript of a closed-door interview with Clinton's former chief of staff, Cheryl Mills, in response to what they called selective and inaccurate Republican leaks.

Release of the transcript is "the only way to adequately correct the public record," the Democrats said in a letter to the panel's chairman, Rep. Trey Gowdy, R-S.C. They said they would release the full transcript in five days, in order to give Gowdy time to identify any specific information in the transcript he believes should be withheld from the American people.

A spokesman for Gowdy said the committee has not released transcripts from witness interviews in order to "gather all facts" and avoid tainting the recollections of future witnesses.

"By selectively leaking" parts of the transcript from Mills' daylong interview last month, "Democrats have shown their nakedly political motivation, willingness to violate the letter and spirit of House rules and their desire to defend Secretary Clinton without regard for the integrity of the investigation," Gowdy's spokesman, Jamal Ware, said.