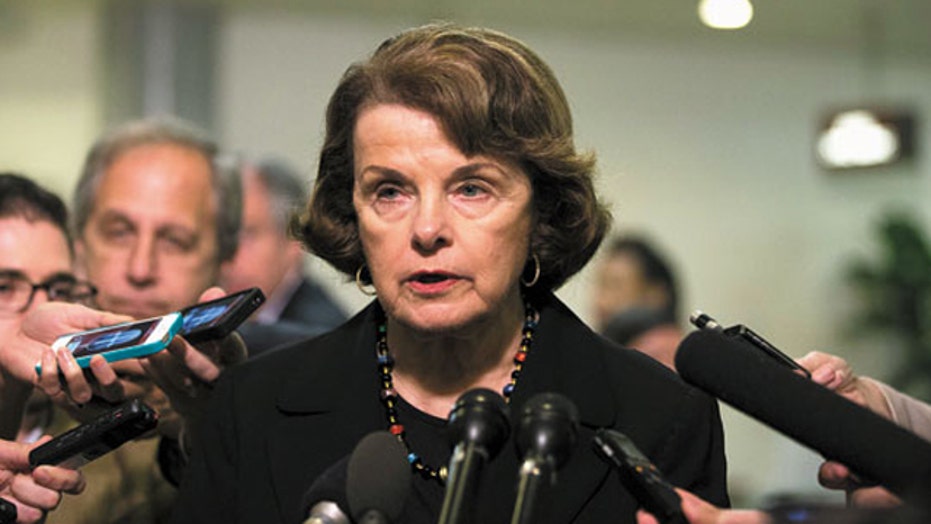 Democrat says Obama has been 'too cautious' on ISIS

The leaders of the House and Senate intelligence committees criticized President Obama on Sunday for failing to decide yet on whether to hit Islamic State targets in Syria and urged him ahead of this week's key NATO summit to take decisive action before the militant group attacks on U.S. soil.

California Democratic Sen. Dianne Feinstein, chairwoman of the Senate Select Committee on Intelligence, said in a separate interview that Obama is perhaps "too cautious" in his approach to combating Islamic State.

"This is a group of people who are extraordinarily dangerous," she said on NBC's Meet the Press." And they'll kill with abandon."

The NATO Summit is Thursday and Friday in Wales.

Obama will attend the summit with hopes of building a coalition, as the administration has proposed, to deal with several international crises including Islamic State in Iraq and Syria and Russian-backed forces in neighboring Ukraine.

The president is expected to spend two days in Bosnia before the summit.

Rogers also said Sunday that Obama's inertia regarding air strikes on Islamic State targets in Syria is part of an overall foreign policy failure that is empowering China, North Korea, Russia and other rival nations.

"It's all related," Rogers said. "The world sees the United States as withdrawn."

Rogers said the president's apparent disengagement or slow response is the reason China has engaged U.S. pilots and Russian President Vladimir Putin has moved into eastern Ukraine without fear of consequence.

Earnest's remarks followed the president saying Thursday that the U.S. still doesn't have a strategy for Islamic State and Syria.

Rogers said the president was presented with a range of military options at the start of the 2011 uprising in Syria to overthrow the regime of President Bashar Assad, a movement that gave rise to Islamic State.

"There have been plans on the table," Rogers said. "The president just didn't want to get engaged."

Rogers also said the surprising and powerful surge of Islamic State -- across the Syrian border and into northern Iraq -- reached a critical point long before the group killed Foley.

He said the president's plan to build a coalition isn't wrong, "just late" because the U.S. now has fewer, safer options in the effort to stop Islamic State before it strikes on American soil.

Feinstein and Rogers, who have access to some of the nation's most sensitive secrets and receive regular and detailed briefings from the nation's spy agencies, offered dire predictions of an attack on the United States or its European allies if the militants are not confronted.

"I'm very concerned because we don't know every single person that has an American passport that has gone and trained and learned how to fight," he said.

Rogers said U.S. intelligence agencies were tracking the Americans who are known to have traveled to the region. Those people, he added, should be charged under existing laws that prohibit Americans from aiding terrorists.

The president, in an interview published early this year by The New Yorker, appeared to minimize Islamic State by comparing the group to a junior varsity basketball team. The White House later said he was speaking about a different threat posed by a range of extremists across the world.

Feinstein said Sunday that the basketball analogy was wrong.

"I think it's a major varsity team," she said while declining to say whether Obama acknowledging a lack of a strategy projected weakness from the White House.

"I think I've learned one thing about this president, and that is he's very cautious," she said. "Maybe in this instance, [he's] too cautious. I do know that the military, I know that the State Department, I know that others have been putting plans together. And so hopefully, those plans will coalesce into a strategy."