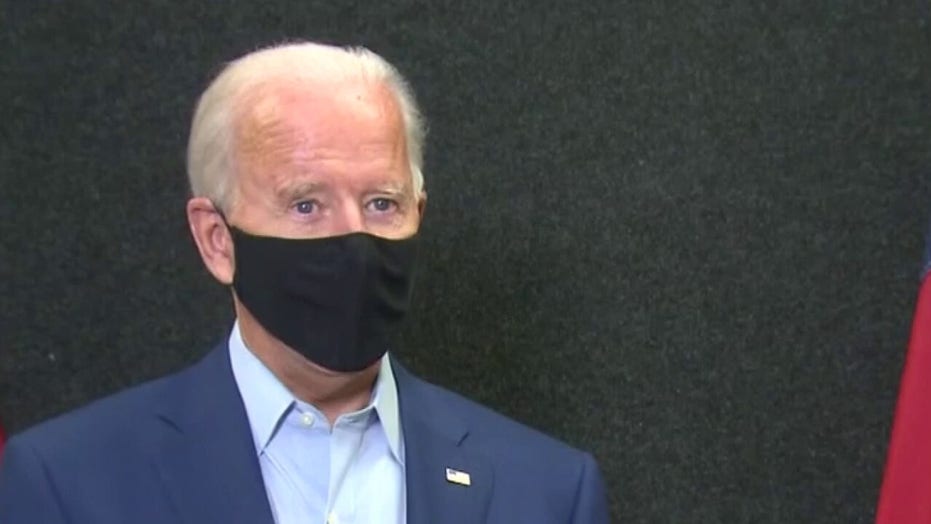 What Biden campaign hopes to accomplish, avoid in first debate

Former Democratic Colorado Gov. John Hickenlooper is leading in the polls in his fight to unseat incumbent Republican Sen. Cory Gardner and is running on a platform that is strictly opposed to fracking in the state.

But just a few years ago, Hickenlooper was saying something drastically different.

Duriing a 2013 Senate Committee on Energy and Natural Resources, Hickenlooper touted how environmentally safe the practice was and even went so far as to drinks a glass of fracking fluid, saying it was “almost ritual-like.” Liberal activists later dubbed the former governor "Frackenlooper."

But Hickenlooper has since changed his stance on hydraulic fracturing, also known as fracking – a process controversial among environmentalists that involves shooting liquid and other compounds underground at a high pressure, which in turn releases natural gases.

"I want to make fracking obsolete,” Hickenlooper said during a June primary debate.

The once-ardent supporter of fracking has not said outright that he backs banning the divisive practice, but rather wants to increase renewable energy options as a competitive alternative.

"The Colorado Supreme Court found [fracking bans] unconstitutional, but that doesn't mean we can't make it obsolete,” he added.

A report released by Yale’s Climate Change Communication earlier this month found that 63% of Americans are “worried” about climate change – an issue that Hickenlooper said is “the defining challenge of our time.”

Hickenlooper could not be reached by Fox News to answer questions surrounding his change of heart on the issue, but he is leading the way as the environmentally forward Senate candidate.

“Our planet’s health, economic well-being, and national security are all at risk,” Hickenlooper said in a statement on his campaign website. “It is imperative that we address the climate challenges we face with a fierce sense of urgency — human lives and livelihoods are at stake.”

But the Democratic candidate has also been vocal in his condemnation for the Green New Deal, alleging that the proposal would set Americans up for failure.

“The resolution sets unachievable goals,” Hickenlooper wrote in an op-ed for the Washington Post, noting that the U.S. did not have the technology to reach “net-zero greenhouse gas emissions” in 10 years.

“There is no clean substitute for jet fuel. Electric vehicles are growing quickly, yet are still in their infancy,” he said.

“Amid this technological innovation, we need to ensure that energy is not only clean but also affordable,” Hickenlooper added. “Millions of Americans struggle with ‘energy poverty’.”

The Democratic candidate instead calls for net-zero carbon emissions by 2050 and has urged the U.S. to re-enter into the Paris Climate Accords, which President Trump pulled the county out of shortly after taking office in 2017.

While advocates argue fracking is a source of clean energy, critics claim it pollutes the air and drinking water while contributing to the greenhouse gases that cause global warming.

But the Democratic Party has a history of promoting fracking, despite concerns from environmentalists in its base.

Ken Salazar, former Colorado senator and secretary of the Department of Interior under President Obama, is an established figure in the Democratic Party with a history of supporting oil and gas companies.

Salazar voted in favor of President Bush’s 2005 Energy Policy Act, which exempted fracking from the Safe Drinking Water Act – meaning fracking liquids are not regulated by the Environmental Protection Agency (EPA), unless diesel is used in the fracking process.

He also led the way for Arctic drilling and removed wild horses from parts of Colorado to open up land for ranchers and energy companies.

Salazar has condemned anti-fracking proposals, alleging they would “undermine businesses across the state, damage our economy and kill jobs” – a sentiment that more closely aligns with incumbent candidate Gardner’s stance on fracking.

"Governor Hickenlooper has said he wants to make fracking 'obsolete,' and in turn, put more than 230,000 Colorado workers out of a job,” Gardner told Fox News Tuesday. “Unlike John Hickenlooper, I am fighting for more jobs not fewer.”

“I’m proud to endorse Governor Hickenlooper. He has the skills to change Washington and get things done for Coloradans,” Salazar wrote in his August 2019 endorsement. “As someone who has had the honor of serving Colorado in the US Senate, I know we need an independent voice to cut through the gridlock and stand up for our state, not a yes-man to Mitch McConnell and Donald Trump.”

Salazar could not be immediately reached for comment by Fox News.