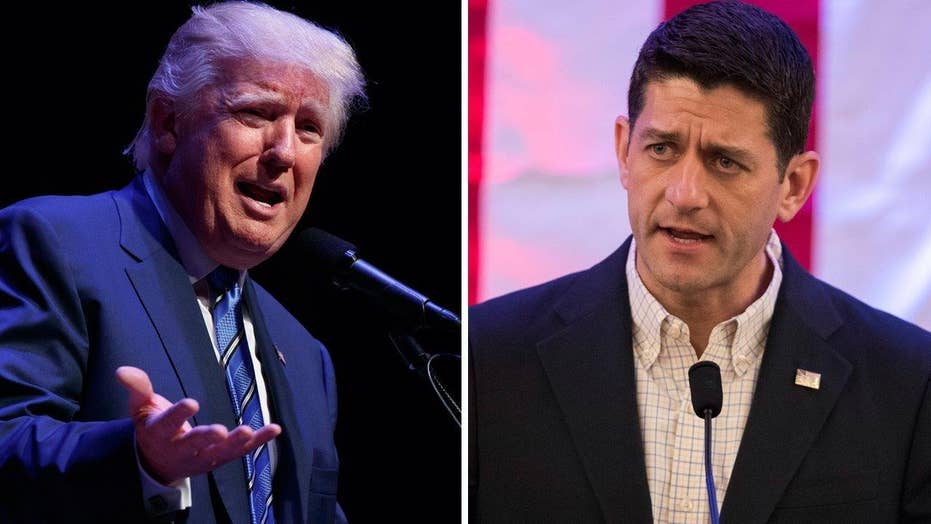 On the roster: Has Pence pushed Trump into Ryan nod? - Hillary blows off press in person - Power Play: Why can’t Trump be Trump? - Audible: Secret agent man - He wondered why the spoon was standing up…

HAS PENCE PUSHED TRUMP INTO RYAN NOD?
Wisconsin was the birthplace of the Republican Party, and according to some, it might be the GOP’s final resting place.

Granted, the spectacle of Republican nominee Donald Trump and his increasingly awkward running mate, Mike Pence, campaigning in the Badger State today is cringy stuff. Trump and Pence will appear without the state’s Republican all-star team: a senator, governor and the Wisconsinite serving as speaker of the House.

But the GOP is not going to die in Green Bay today.

What we are really watching is the shotgun marriage arranged by anxious Republicans between Trump and Pence hitting the skids. Bigly.

Trump and Pence arrive just four days before the state’s primary for non-presidential contests, in which Trump has so far refused to back Speaker Paul Ryan against a pro-Trump challenger. Pence, meanwhile, has backed Ryan.

Awkward, but maybe okay, if it weren’t for the fact that that Trump belittled Pence for the move.

This came as Pence was stumbling through the day on other endorsements, seeming to shun Sen. John McCain and Sen. Kelly Ayotte when asked by reporters about their primary races. Confronted with the absurdity of party-loyal Pence shunning McCain, whose own support he once sought, and Ayotte, a GOP star player, Pence and his team came back with a blanket endorsement of every Republican officeholder.

The humiliations being visited upon Pence are different and, in their own ways, worse than those that Trump backers like Chris Christie have endured. And that’s because Pence is such an unsuitable helpmate for Trump.

You got the sense of how ugly this could be last week when Pence suggested that he would get the campaign to stop blacklisting reporters and news outlets that wrote unflattering pieces about Trump. Pence was freelancing on press access, something about which Trump obviously cares deeply, and, unsurprisingly, got no results.

Pence’s main function is, as an 11-year-old at a North Carolina town hall put it, “softening up on Mr. Trump’s policies and words.” But the hope held by the Republican Party leadership and, presumably, Pence himself is that the Indiana governor can change Trump’s trajectory from the inside.

We haven’t seen that so far, but that may be changing.

It doesn’t seem like it will matter much in a practical sense. Ryan is already expected to defeat his Trump-backing challenger… by a lot. But if Trump caves, it would be was evidence that he is being brought to heel and showing remorse for his feud with the parents of an Army officer killed in the Iraq war.

But you have to wonder if Byron York didn’t have the right idea for Trump when he suggested that rather than endorsing Ryan, Trump should be rejecting Ryan’s endorsement.

Trump would seem to be far better off running against candidates like Ryan with whom he profoundly disagrees on so many subjects – a border wall, allowing Muslims to enter the United States, free trade, etc.

If Trump backs Ryan, he may be get some relief from his current headaches with the party, but the nominee will only find himself in a weaker position the next time Ryan and others rebuke his later, inevitable controversies.

TIME OUT: SILVER OUTFOXED
Did you ever hear the story about the craziest commodities scheme ever? It’s an amazing read. Priceonomics: “Until his dying day in 2014, Nelson Bunker Hunt, who had once been the world’s wealthiest man, denied that he and his brother plotted to corner the global silver market.  Sure, back in 1980, Bunker, his younger brother Herbert, and other members of the Hunt clan owned roughly two-thirds of all the privately held silver on earth. But the historic stockpiling of bullion hadn’t been a ploy to manipulate the market, they and their sizable legal team would insist in the following years. Instead, it was a strategy to hedge against the voracious inflation of the 1970s—a monumental bet against the U.S. dollar. Whatever the motive, it was a bet that went historically sour. The debt-fueled boom and bust of the global silver market not only decimated the Hunt fortune, but threatened to take down the U.S. financial system.”

HILLARY BLOWS OFF PRESS IN PERSON
Hillary Clinton had a close encounter with the press today, but not so close as to endanger her 35-week streak of not holding a press conference.

The Democratic nominee took a handful of questions, but the first question should have been: Why won’t you hold a press conference?

Were Clinton to have provided an honest answer she would say: “Because I don’t have to.”

Democrats worry that Clinton is being allowed to skate through the election without sticking to the liberal principles that Bernie Sanders and President Obama made her adopt during her surprisingly protracted primary run.

And there could be no better evidence of Clinton’s approach to the race than her refusal to meet the press.

It’s not like there isn’t anything to answer for: her cleaning out the DNC in the wake of the email hack that revealed bias against Sanders, the cash payments to Iran, and her running mate’s awkward straddles on issues ranging from abortion to trade to right-to-work laws and on and on.

As it turns out, though, journalists aren’t exactly sympathetic figures in the eyes of most voters. When they are moved to pay attention to us it is usually for scorn or contempt. Reporters complaining that Clinton won’t talk to them are hardly going to move persuadable voters.

And as long as Donald Trump is the recipient of obsessive coverage of his scatter-shot campaign effort, Clinton will be quite content to let the press pack bay after him.

POWER PLAY: WHY CAN’T TRUMP BE TRUMP?
After endorsing Donald Trump for president, top Republicans are in agony over him acting, well, exactly like he was when they endorsed him. Will Republicans succeed in tethering Trump or will he go his own way? Fox News Contributor Brad Blakeman and former Democratic Senate aide Dennis Kelleher discuss with Chris Stirewalt. WATCH HERE.

And what about Obama? - The president has been flexing his political muscles more than usual lately, but what should his role be in 2016? How much can he change the state of the race? Our panel takes on the discussion. WATCH HERE.

Trump says he was wrong on Iran money video - Politico

AUDIBLE: SECRET AGENT MAN
“In the intelligence business, we would say that Mr. Putin had recruited Mr. Trump as an unwitting agent of the Russian Federation.” – Former CIA Director Michael Morell in an NYT op-ed endorsing Hillary Clinton.

FROM THE BLEACHERS
“Chris and Co., I saw that a reader decided to take their eyes elsewhere due to what is seen as biased coverage against Trump. That sentiment and mentality is really hurting us all. If some don’t like what they see, they look elsewhere for something more agreeable. I don’t always agree with what is written, but I greatly appreciate the perspective, sharp writing, and of course the lighter touches. Keep up the good work!” – Tyler Blouin, Dover, N.H.

[Ed. note: Thank you, Mr. Blouin, for your continued readership, perspicacity and, if I might hazard, intellectual courage. But we’re also sympathetic to those who believe that the fate of the world hangs in the balance of this election. We tend to take a longer view of politics, but sympathize with those who see things in a more existential sense. It must be damned stressful!]

“The two major parties ought to be ashamed.  What voters are offered is a choice between a political lunatic and an unindicted criminal.  I’m voting for Gary Johnson so I can look myself in the mirror when I choose to shave. I suggest you stop analyzing this election as if it is a game and call it what it is--an unmitigated disaster regardless of who wins.” – Bill Panagakos, Santa Fe, N.M.

[Ed. note: You talk as if shame were still a thing in politics! Pfffttttt… But seriously, clean-cheeked or grizzled, we appreciate your feedback!]

“Is there a point to [the daily Time Out]? If there is I’m not seeing it.” – Roger Ferch, Phoenix, Ariz.

[Ed. note: For us, it is a sanity preservation device – a little diversion in the face of all of the political madness and a reminder that there really is more to life than this. That’s the same reason we always try to close with a lighthearted kicker. Laugh or else you’ll cry…]

HE WONDERED WHY THE SPOON WAS STANDING UP….
Exeter [U.K.] Express and Echo: “A Newton Abbot [England] man has appeared in court charged with allegedly poisoning his boss with the sex drug Viagra on April Fool's Day. Benjamin Chope, 24, of Whitelake Place, appeared before magistrates in Torquay charged with the offence against Daniel Webber. Chope was not required to entered a plea when he appeared in court on Thursday, July 28. The court was told that the offence took place on April 1 in Newton Abbot. Chope was charged with maliciously administering a poison or other destructive or noxious thing, with intent to injure, aggrieve or annoy the Mr Webber. The poison was identified as Sildenafil, commonly known as Viagra. Magistrates decided that the offence was so serious that it could only be tried at the crown court. Chope was granted conditional bail and will next appear at Exeter Crown Court on August 25.”

AND NOW, A WORD FROM CHARLES…
“No, this is not old news.  It’s new news, and it’s highly embarrassing. And the president, I have to admit, he’s rather good with words.  He made it sound like it was just completely natural.” – Charles Krauthammer on “Special Report with Bret Baier.”