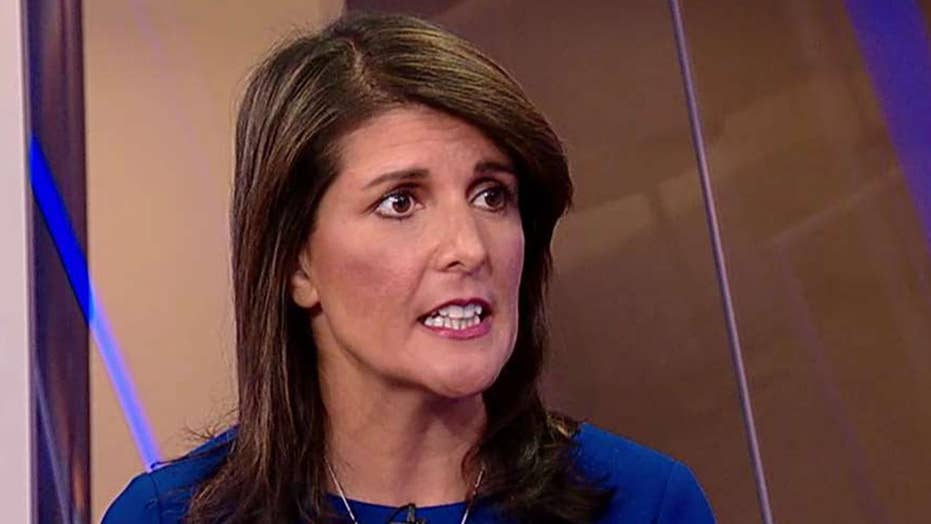 Amb. Haley tells Syria, Russia and Iran not to 'test' US

U.S. Ambassador to the United Nations Nikki Haley warns against use of chemical weapons in Syria.

Iran is "feeling the pain" from the sweeping sanctions revived by President Trump in August, the U.S. ambassador to the United Nations, Nikki Haley, told Fox News exclusively in a wide-ranging interview on Wednesday.

The Trump administration this summer restored major sanctions against Iran in the areas of automobiles, gold and other key metals. The sanctions had been suspended under former President Barack Obama's 2015 nuclear deal, pummelling the value of currency there and threatening to further unravel the Islamic country's already-struggling economy.

Trump pulled the U.S. out of the nuclear deal in May, saying its enforcement and monitoring mechanisms were too lenient and calling for Iran to return to the negotiating table.

IRAN LOOKS TO CHINA FOR HELP AS SANCTIONS DECIMATE ECONOMY

Even more severe U.S. sanctions against Iran's banking and energy sectors are slated to go into effect in November, including restrictions on Iran's oil industry that could cut off a crucial source of hard currency.

"Our focus right now is on the Iranian people," Haley said, acknowledging the unrest in the country. "I mean, they have protested, they have spoken out, they have said they want a better life. ... But at the end of the day, we can’t allow them to have any nuclear programs."

Responding to a report that Syrian President Bashar al-Assad has approved a gas attack in the Idlib Province, the last remaining rebel stronghold in the country, Haley also issued a pointed warning to Iran and other key players in the Middle East.

"What we told, you know, the Syrians, the Russians and the Iranians was, well, twice -- we have warned you not to use chemical weapons; twice you have used it, and twice President Trump has acted," Haley said. "Don’t test us again. Because I think the odds are very much against them."

For Russia and Iran, both allies of the Syrian government, retaking Idlib is crucial to complete what they see as a military victory in Syria’s civil war after Syrian troops recaptured nearly all other major towns and cities, largely defeating the rebellion against Assad.

U.N. officials believe an offensive on Idlib would trigger a wave of displacement that could uproot an estimated 800,000 people and discourage refugees from returning home. The U.S. and France have warned that an Idlib offensive would give rise to a humanitarian crisis, and that a chemical attack in Idlib would prompt Western retaliation.

President Trump, who ordered Syrian targets bombed last year and again in April this year after purported chemical attacks, said earlier this month that any further uses of chemical arms would be a "grave mistake.' On Sunday, government forces bombed the village of Hobeit in Idlib Province, killing an infant girl and wounding several other civilians, the Syrian Civil Defense search-and-rescue group reported.

Responding to reports that former Secretary of State John Kerry may be telling foreign countries to wait out Trump's administration, Haley again slammed the Obama administration's previous deal with Iran.

"They can wait this president out, but this president is what saved us with this policy. Because otherwise, within just a few years, they would have gotten all this money and it would have been lifted anyway," she said, referring to the eventual sunset of key provisions of the Iran deal. For example, some restrictions on the number of centrifuges Iran could produce, as well as research and development into centrifuges, were set to expire in 2025, although larger restrictions on the country's ability to produce weaponized nuclear weapons were to be indefinite.

Asked separately about President Trump's Wednesday authorization of sanctions against any country that interferes with U.S. elections, Haley said the message was clear: "Straight shot across the bow. To anyone that wants to mess with our midterm elections, get involved in our midterm elections; use any kind of fraud -- the president is saying, if you do it, you will pay."

Haley also addressed the worsening economic and humanitarian crises in Venezuela, saying the situation is clearly linked to the country's socialist policies.

"What I will tell you is Maduro needs to go," Haley told Baier. " I was on the Venezuelan border about a month ago, and saw literally a million people cross that border every day for their only meal. You had people bringing their last possessions to sell in Colombia, just to buy food. And this is all because of failed socialism that led to corruption, a dictatorship and poverty. Inflation is about to hit the 1 million percent mark there."

She compared the problems in Venuzuela to those in Nicaragua, where anti-government protesters are demanding President Daniel Ortega leave office. Haley charged that both leaders have "gotten high on power."