In what may be the most far-reaching proposal to ever be considered in Congress, Rep. Alexandria Ocasio-Cortez, D-N.Y., unveiled her "Green New Deal" on Thursday -- a government-led overhaul of virtually every aspect of American life that would guarantee a host of taxpayer-covered benefits for all and phase out fossil fuels.

Along the way, her office says the plan would aim to make air travel obsolete, upgrade or replace every building in America to ensure energy efficiency and give economic security even to those "unwilling" to work.

“Today is the day that we truly embark on a comprehensive agenda of economic, social and racial justice in the United States of America,” she said alongside Sen. Ed Markey, D-Mass., and other lawmakers outside the Capitol. “That’s what this agenda is all about.”

The plan, which calls for a massive package of big-government proposals including health care for all, quickly picked up the backing of major 2020 Democratic presidential hopefuls including Sens. Kamala Harris, D-Calif., Elizabeth Warren, D-Mass., and Cory Booker, D-N.J. -- who all co-sponsored the resolution.

“Our history is a testimony to the achievement of what some think is impossible — we must take bold action now,” Booker tweeted.

While the resolution itself would do very little because it is non-binding, it is the first time the policy proposal has been formally outlined in Congress. The resolution says “a new national social, industrial and economic mobilization on a scale not seen since World War II and the New Deal” is an opportunity to tackle systemic injustices toward minority groups, create millions of high-wage jobs and “provide unprecedented levels of prosperity and economic security for all people of the United States.”

Its proposals include “net-zero greenhouse gas emissions through a fair and just transition for all communities and workers;” job creation; infrastructure investment; guarantees of clean water, healthy food and sustainable environment; and a curiously undefined “access to nature.”

Beyond those broad proposals, the plan and accompanying documents from Ocasio-Cortez include a range of far-fetched goals -- and drew swift scorn from Republicans and other critics. The Republican National Committee dubbed it a "socialist wish list" that would kill at least 1 million jobs and disrupt global trade -- while costing trillions.

The resolution, for instance, includes a proposal to “upgrade all existing buildings” in the country in order to achieve energy efficiency, safety, affordability, durability and comfort.

An accompanying FAQ, released by Ocasio-Cortez’s office and obtained by NPR, goes even further, calling to "upgrade or replace every building in US for state-of-the-art energy efficiency." A second similar FAQ on her website echoed some of those prescriptions though was later removed. 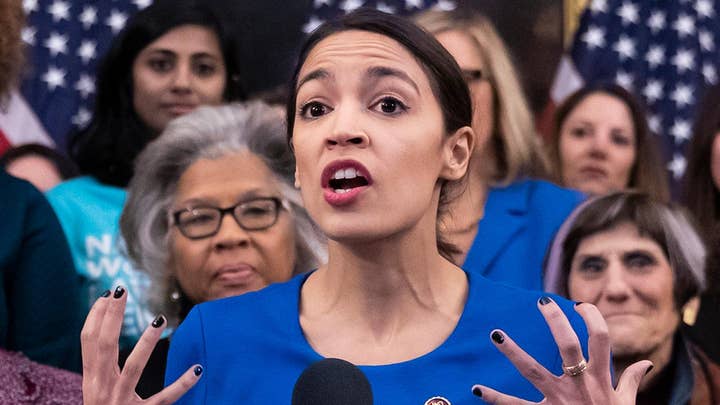 The resolution also backs the concept of high-speed rail as a proposal to reduce carbon emissions -- but the FAQ goes so far as to urge that development “at a scale where air travel stops becoming necessary.”

It also promises “economic security for all who are unable or unwilling to work.” What constitutes economic security is not clear, but the plan does call for programs including a federal job guarantee, universal health care and "affordable, safe, and adequate housing."

The FAQ also notes that it has set a goal of net-zero, rather than zero, emissions in 10 years “because we aren’t sure that we’ll be able to get rid of farting cows and airplanes that fast.”

However, the push is likely to see resistance not only from Republicans, but even some Democrats. Sen. Mazie Hirono, D-Hawaii, was asked about the plan to replace planes with high-speed rail, and did not seem impressed.

“That would be pretty hard for Hawaii,” she laughed.

Pelosi took a more conciliatory tone on Thursday, saying: “Quite frankly, I haven’t seen it, but I do know it’s enthusiastic and we welcome all the enthusiasm that is out there.”

But in the press conference outside the Capitol Thursday, Ocasio-Cortez said she didn’t mind the phrase “green dream.”

“I don’t consider that to be a dismissive term,” she said. It’s a great term.”