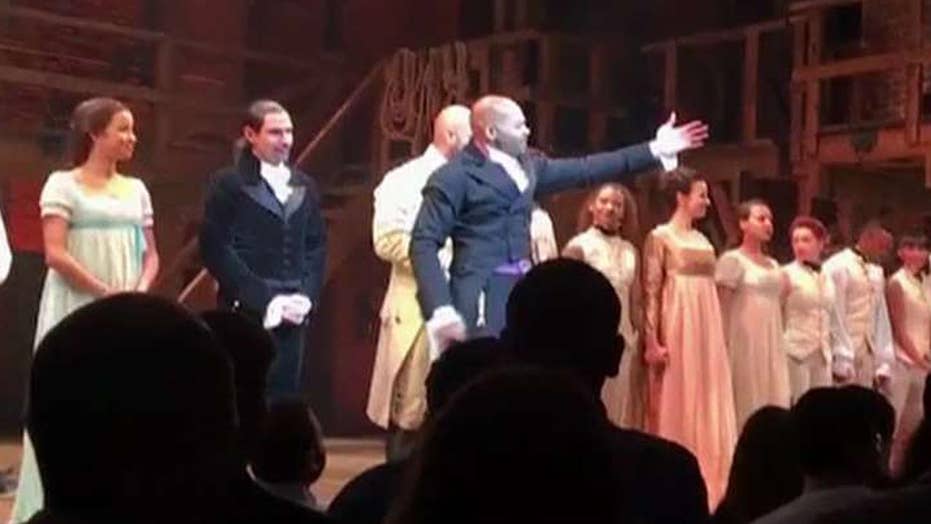 GRACE IN POLITICS? WHAT’S NEXT, HONESTY?
Did you notice something unusual about Vice President-elect Mike Pence’s response to getting a lecture from the cast at the end of a performance of the musical “Hamilton?”

It happens so seldom that you may not have recognized it, but given the opportunity to publicly press a grievance, Pence let the matter drop.

And there it fell. It was a cudgel that could have been used for days to beat down political rivals, generate sympathy from his own side and to raise money and Pence just left it there, as useless as a powdered wig at a monster truck rally.

It is the era of grievance politics and Pence, ahem, threw away his shot.

Brandon Dixon, who plays Aaron Burr in the play, silenced members of the audience booing Pence and explained to the Indiana governor that the cast members were “alarmed and anxious that your new administration will not protect us, our planet, our children, our parents or defend us and uphold our inalienable rights.”

In the crummy game of outrage cultivation that passes for politics in America today, this is perfect: the correct enemy (liberal, artistic elites), the correct setting (New York), the correct level of media interest (the hottest Broadway show in decades) and Pence was completely innocent in the confrontation.

For offenses far smaller, the political outrage perpetual motion machine has pumped out weeks and weeks of content until every hot take had turned cold, the clickbait pail was empty and every fundraising email scare had been sent.

But Pence unilaterally disarmed, even as the president-elect was showing him how it was done, demanding an apology from the cast of the “highly overrated” musical.

Why anyone would care to have an apology from complete strangers would be a mystery in real life. Why you would want one from “overrated” ones would be even more perplexing – at least outside of the world of politics.

Inside politics, which consumes and ever-larger portion of America’s bandwidth, it is no mystery. Every slight, real or perceived, is a weapon.

Imagine you’re on a college campus before Halloween and the air is heavy with portent. Over here are students awaiting the chance to be offended by sexist/racist/culturally appropriative/etc. costumes. Over there are the students who look forward to triggering the P.C. police and then being outraged at the repression. Both sides get what they want: attention and further confirmation about the awfulness of the other side.

It would be bad and sad enough if it were just campus craziness, but it is everywhere.

The cast of “Hamilton,” was certainly playing to type with its self-satisfied expression of indignation. And so too was the Trump supporter who interrupted a Chicago performance of the show to wryly observe: "We won! You Lost! Get over it! F**k you!"

We all have lots and lots of feelings, but don’t act on them or even usually express them. And this is something we once adorably referred to as “civilization.”

Does the humming of the man on the train make you feel like beating him about the head and shoulders with your umbrella? Fine! Just keep your bumbershoot to yourself.

Did you just fall completely in love with the most heart-stoppingly gorgeous person to walk into the produce section at the Kroger? No worries! Just don’t climb over the pile of papayas to express your crush.

Do you find your children’s attempt to learn a new skill unintentionally hilarious? It’s cool! You’re a bad person, but you already knew that. Just keep laughing on the inside and nodding gravely on the outside.

What social media is teaching people is that their opinions matter. By and large, they do not. Almost never, in fact. Your brain is a Victoria Falls-sized outpouring of thoughts and insights. Most of it is of no value, even to you. This is why the aforementioned civilization long held that it was foolish and counterproductive to spout forth. It was considered better to keep your opinions to yourself as much as decency and safety would allow.

Now, Twitter asks you to “share your unpopular opinion” as a matter of personal liberation. Gee, thanks.

What matters less are our opinions.

Opinions are luxury items. And you never ought to have more than you can afford.

THE RULEBOOK: ESSENTIAL ELEMENT
“Energy in the Executive is a leading character in the definition of good government.” – Alexander Hamilton, Federalist No. 70

TIME OUT: NYUCK, NYUCK, NYUCK
You may know Henry David Thoreau as the ascetic scold of Walden Pond, delivering windy pronouncements about the way things ought to be. But did you know that he was trying to be funny? That’s the argument from critic M. Allen Cunningham: “Strangely enough, during Henry’s lifetime his problem was precisely the opposite: his audience had learned to anticipate laughs whenever he appeared in print or rose to speak. … Following lectures in Salem and Gloucester in 1848, the reviews were unanimous. His Salem talk, as reported in the local Observer, was “done in an admirable manner, in a strain of exquisite humor, with a strong undercurrent of delicate satire against the follies of the times. Then there were the interspersed observations, speculations, and suggestions upon dress, fashions, food, dwellings, furniture, &c., &c., sufficiently queer to keep the audience in almost constant mirth…”

TRUMP’S GLOBAL BUSINESS REACH PROMPTS CONCERNS
WaPo: “Turkey is a nation in crisis, scarred by government crackdowns following a failed coup attempt and on a potential collision course with the West. It is also home to a valuable revenue stream for the president-elect’s business empire: Trump Towers Istanbul. Donald Trump’s company has been paid up to $10 million by the tower’s developers since 2014 to affix the Trump name atop the luxury complex, whose owner, one of Turkey’s biggest oil and media conglomerates, has become an influential megaphone for the country’s increasingly repressive regime. That, ethics advisers said, forces the Trump complex into an unprecedented nexus: as both a potential channel for dealmakers seeking to curry favor with the Trump White House and a potential target for attacks or security risks overseas.”

--The second wave of presidential transition “Landing Teams” is slated to link up with government agencies as Trump pivots to Domestic and Economic leadership positions.

AUDIBLE: STAYS WITH YOU
“I think that if Hillary Clinton had won the election then I’d just turn over the keys …I think now I have some responsibility to at least offer my counsel to those who will continue to be elected officials about how the D.N.C. can help rebuild, how state parties and progressive organizations can work together.” – President Obama on his future role from an interview with the New Yorker.

Which senators are the most likely to break party ranks in the Trump era? - FiveThirtyEight

FROM THE BLEACHERS
“We have followed your column for a while.....we are especially appreciative that you views are positive, friendly and given in the spirit of providing humor, knowledge, and very sharp political insight. I have read every one of your emails! We would like to see the tv gig continue with Dana, it was very well done. What are your thoughts about trying to manipulate the votes Of the Electors on December 19th? There might be a revolution if they turn to Clinton...” – Josh Frey, Coto de Caza, Calif.

[Ed. note: Thank you, Mr. Frey! And I will be sure to pass your good wishes on to Dana. We loved doing the show, but seven-day weeks are one of the things we will happily leave in the campaign season! As for so-called "faithless electors," it is probably mostly fantasy on the part of Clinton supporters. Almost all states bind their electors to the winners of their popular vote, enforced by penalties imposed after the fact. While that wouldn't necessarily prevent mass defections, it certainly provides considerable disincentives. One suspects that the loose talk about faithless electors is of the same kind that suggested Republicans could scuttle Trump's nomination at the convention.]

“Please tell me that we are not going to be governed by posts to Twitter or Facebook.  How many millions of Americans disdain social media and choose not to give their everyday business to anybody wishing to read it.  Mr Trump seems to be a devotee of Twitter and he needs to learn that spouting off on that media is not the way to reach his supporters.” – Bill Norwood, Ozark, Mo.

[Ed. note: Well, Mr. Norwood, Trump might point to his unlikely success as a broad affirmation of his dependence on social media to drive his message. Trump gets a two-fer out of Twitter. First, he gets to communicate directly with supporters and shape perceptions without a filter. But then, the press picks up on the tweet and circulates it even more broadly. As to whether we will be ruled by social media, the answer is no. But given current trends, we are likely to continue to be ruled by those with mastery of it.]

“When a senator or a representative is selected for a cabinet post and subsequently confirmed, who decides who replaces him or her in the senate or the house?  Thank you.” – E. Carbone, Annapolis, Md.

[Ed. note: There are some variations, but generally speaking, governors decide. Every state has its own laws for how soon special elections to fill vacancies have to be held. But it is the chief executives of the several states who generally get to pick the immediate replacements]

“Mr. Stirewalt, You deserve the prefix. I am enjoying the Halftime Report so much that I wanted to thank you. Your work makes me hear a dusty old liberty bell ringing somewhere off in the distance and is a pleasure to read. Very nice job sir.  Great stuff, thanks again.” – Howell Seegar, Phenix City, Ala.

“The way I heard it: ‘You idiot!  Pie are round!  Cornbread are square!’ I enjoy the humor included in the HTR but like the history lessons even more.  Keep up the good work.” – Harold Richardson, Montgomery, Ala.

[Ed. note: A separate pan for cornbread? Mr. Richardson, you all are pretty fancy down in Alabama! In Wood County, W.Va. they know you cook your cornbread in a cast-iron skillet just as black as a bear's backside. And if you're really doing it right, you put the skillet in the oven with a little (okay, a lot) of bacon grease in it while you mix the batter. The hiss and pop when you pour the batter in is the perfect promise of a bottom crust that can stand up to my mom's ham-bone bean soup.]

HEY, MAYBE THE GUY IS JUST LOOKING FOR A BATHROBE…
AP: “A bank robber dubbed the ‘spelling bee bandit’ because the notes he’s passed to tellers contain the same misspelling is being sought for four robberies in Massachusetts. The FBI says the man’s notes have just one word: ‘robery’ with one ‘B.’ His latest target was a TD Bank in Peabody on Sunday. He’s also suspected of hitting banks in Arlington, Reading and Burlington since Oct. 31. In all the robberies, he’s worn sunglasses and either a baseball hat or hood. He’s described as white, in his late 30s or early 40s, between 5-feet, 11 inches, and 6-feet-2. The FBI says it’s concerned because the man's becoming increasingly aggressive toward the tellers. The reward is up to $1,000.”